You are here » The Obscure Cities » Albums & books » Revoir Paris 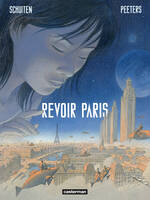 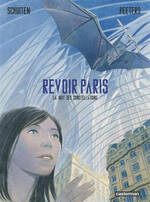 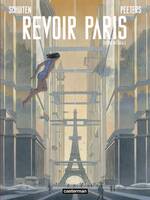 Both albums were published as an integral album in June 2018 by Casterman.

Although it is a joined project by Schuiten and Peeters it is not one in the Obscure Cities series. The story is about the history and possible future of Paris.

According to François Schuiten “It will be a tribute to those that have marked the history of this city. But the end will be very futuristic…” 3).

The album has two volumes, with a total of about 110 pages. The first volume has 64 pages 6). The first volume of the album was published a few weeks before the start of the Revoir Paris exhibition in La Cité de l'Architecture & du Patrimoine in Paris that opened at November 20, 2014. The second volume was released on October 26, 2016 and is titled: Revoir Paris, la nuit des constellations. 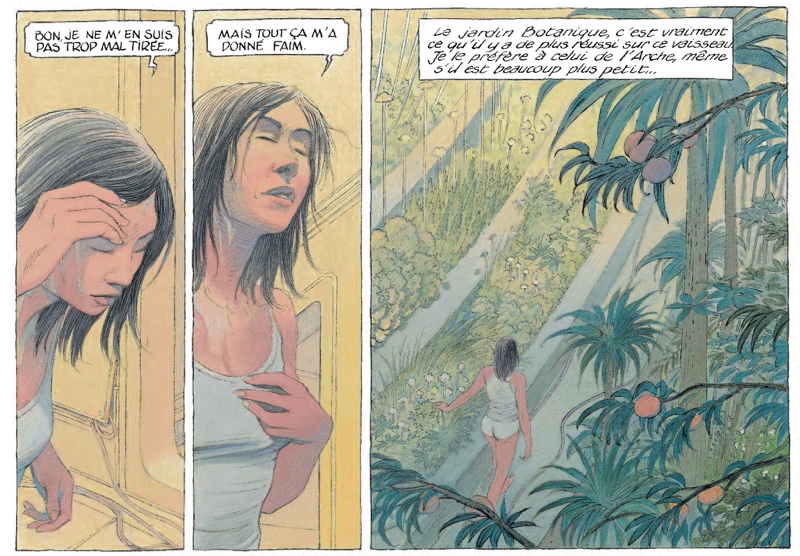 February 2156. Kârinh was born in the Ark, a space colony established by a group of former Earthlings who cut all ties with their home planet. The girl has always dreamed of this Earth that she has never seen it. Especially Paris, a city she discovered in books that miraculously were preserved. It is therefore that she immediately agreed to lead the Tube, a ship en route to Earth, carrying a dozen bodies in hibernation. But increasingly frequent, Kârinh immerses in her fantasies of the city. Will they hinder the realization of her mission? And most importantly, once bound, will the City of Light of the XXII century meet her visions? 7) 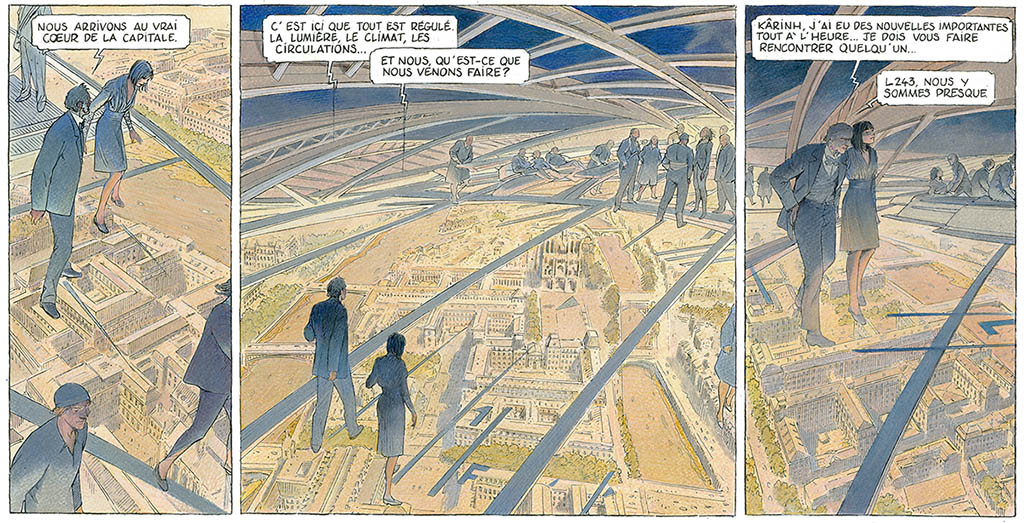 Exclusive look at the first pages

Early 2014 the first pages of Revoir Paris were published at this dictionary as an exclusive preview. The cover features flying machines inspired by Robida and the housing towers by Auguste Perret. 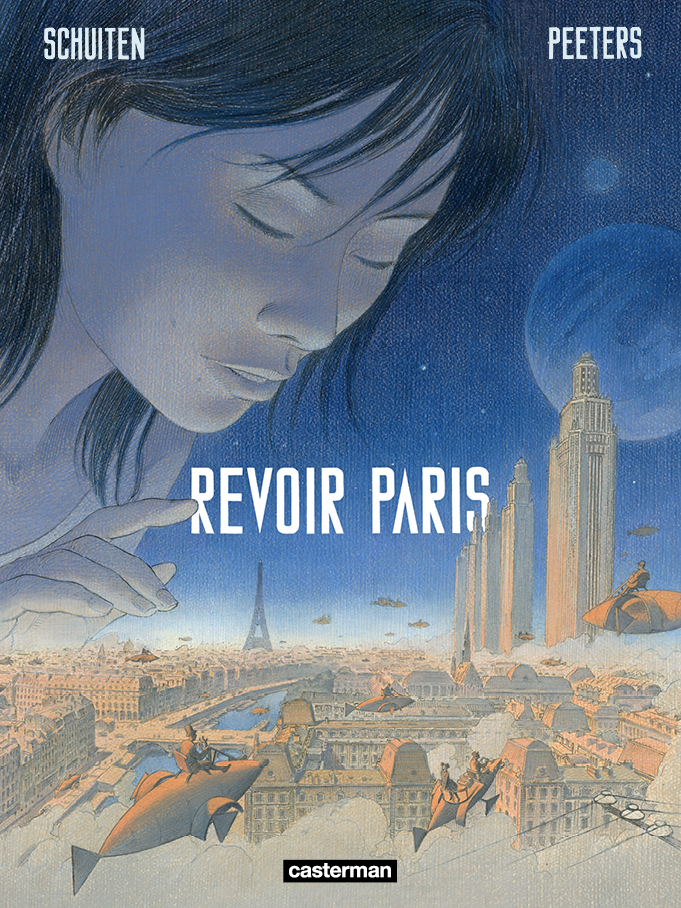 and the first page of the album: 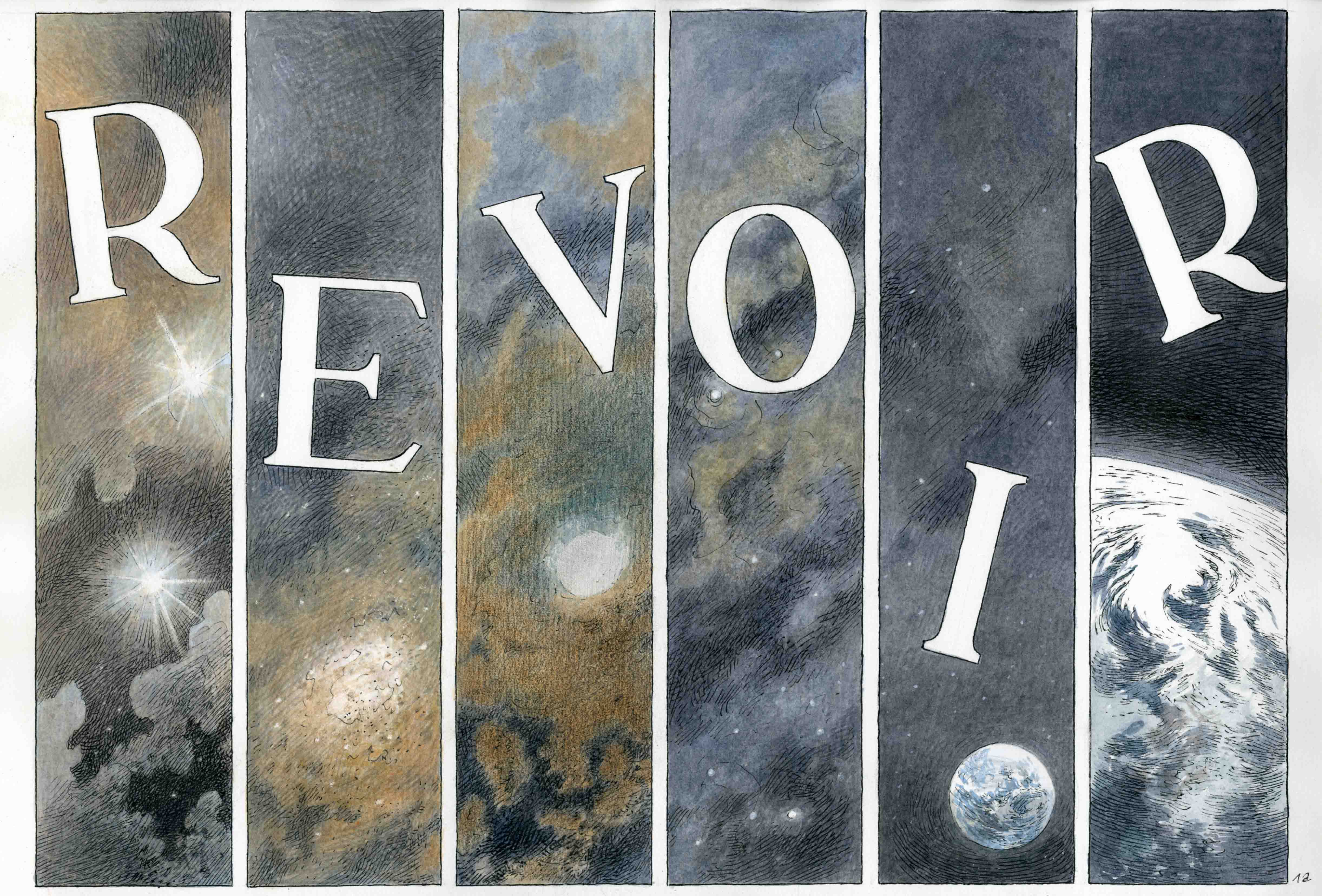 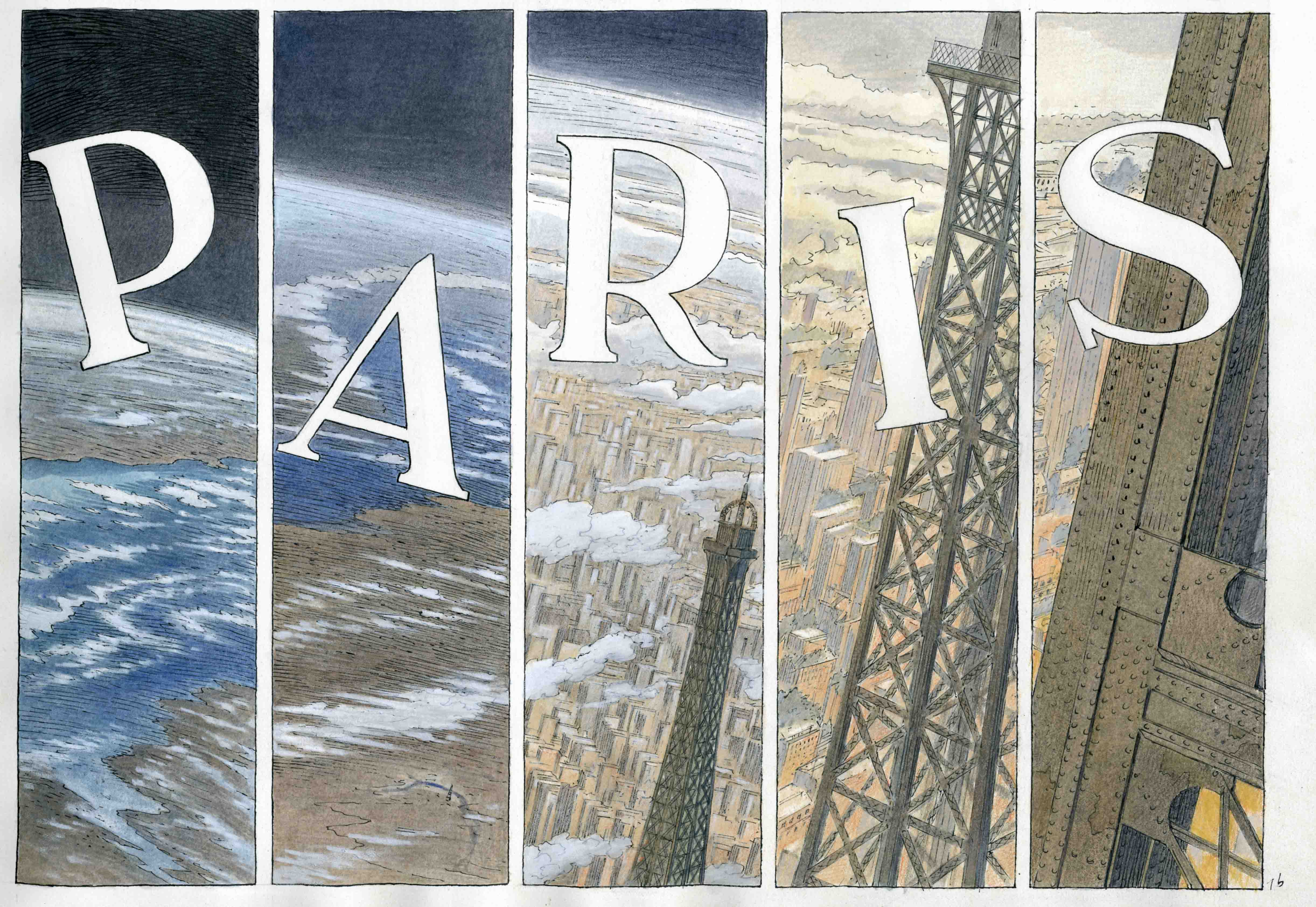 François Schuiten made his first sketch of the frontpage even before he started with the first pages. 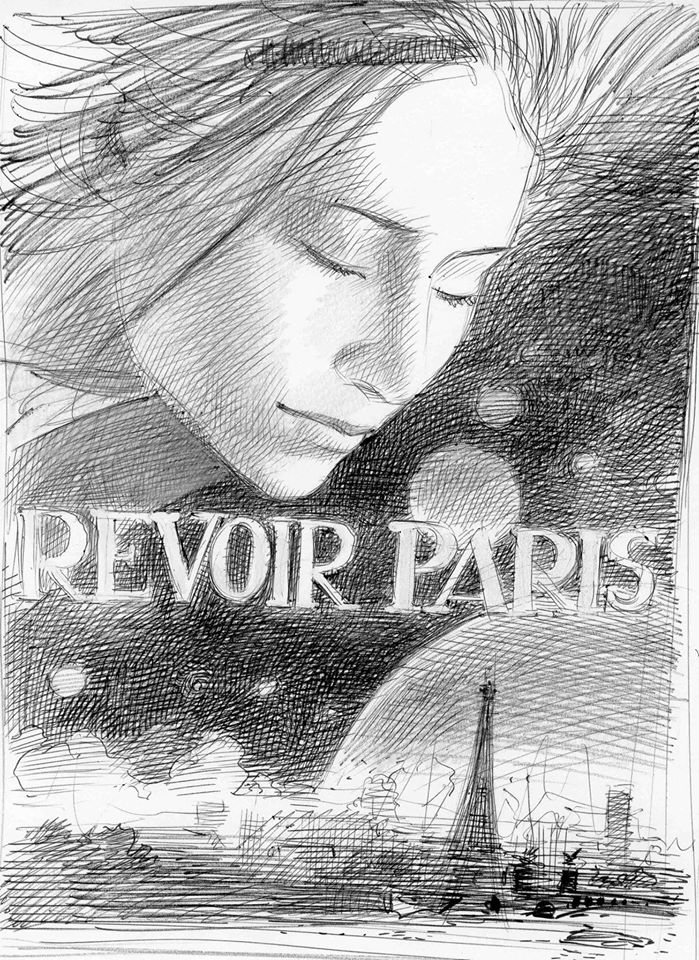 Casterman published some other pages: 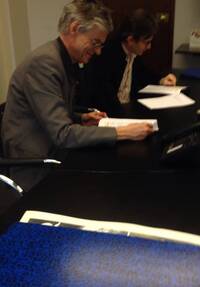 On February 12, 2014 François Schuiten and Benoît Peeters delivered the first 41 finished pages of Revoir Paris to Casterman. Benoît Mouchart took a picture of this event 10).

Revoir Paris is also published in the Japanese Big Comic Original in 4 episodes of about 20 pages. This publication in Japan was planned for 2015, but it was finally published in November 2016 11).

At least 22 pages of Revoir Paris were part of the exhibition with the same name in La Cité de l'Architecture & du Patrimoine in Paris. It opened at November 20, 2014. It gave a view on the architectural history of Paris seen through the prism of François Schuiten and Benoît Peeters. The exhibition was held until March 9, 2015.

The second and final part of Revoir Paris was published on October 26, 2016. This album was projected for an earlier release but for some time there has not been much progress due to the many activities François Schuiten had to do around Train World. 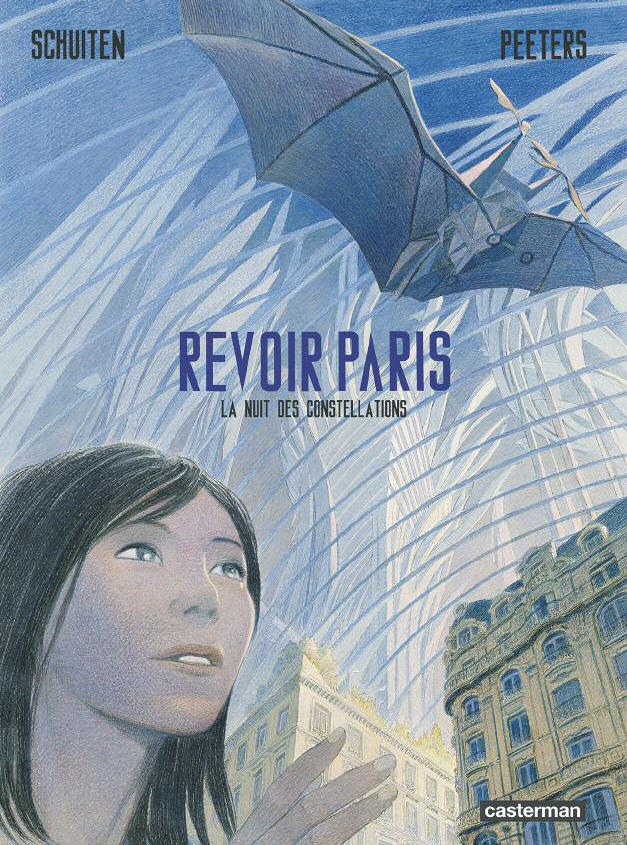 The title of the second album is: Revoir Paris, La Nuit des Constellations. The cover features Kârinh and Avion n° 3 by Clément Ader.

The second album has 56 pages and it is a hard cover edition (240x320cm) like the first album. The foreign rights are sold for German, Italian and Spanish editions, besides the French and Dutch edition. 12). 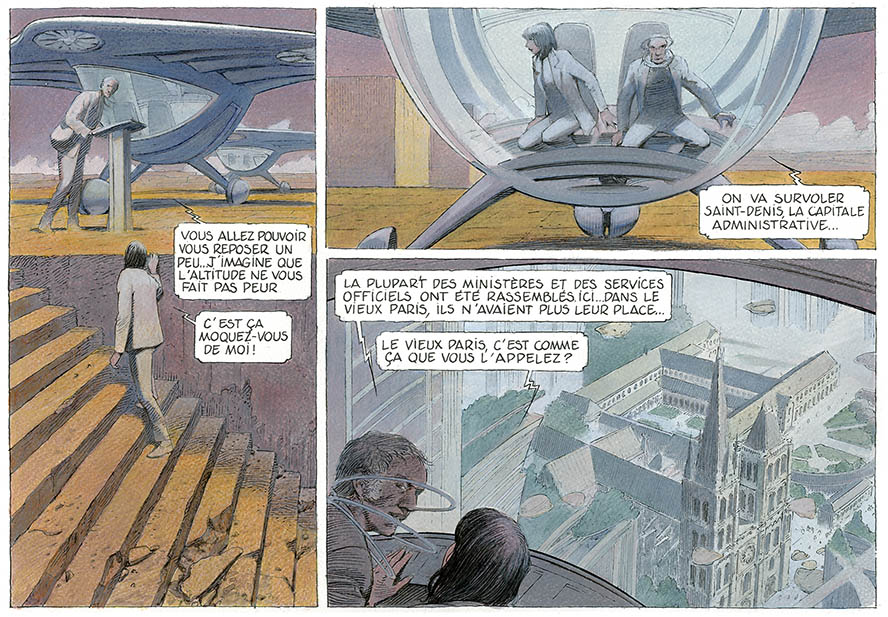 The French comic magazine CaseMate published a preview of over 20 pages in their issue 93 of June 2016 14).

Machines à dessiner is a new exhibition by François Schuiten and Benoît Peeters that was held from October 25, 2016 to February 26, 2017 in Musée des Arts et Métiers (Paris). This exhibition also marked the release of the second volume of Revoir Paris.

In December 2015 Benoît Peeters posted an image of François Schuiten working on the album. 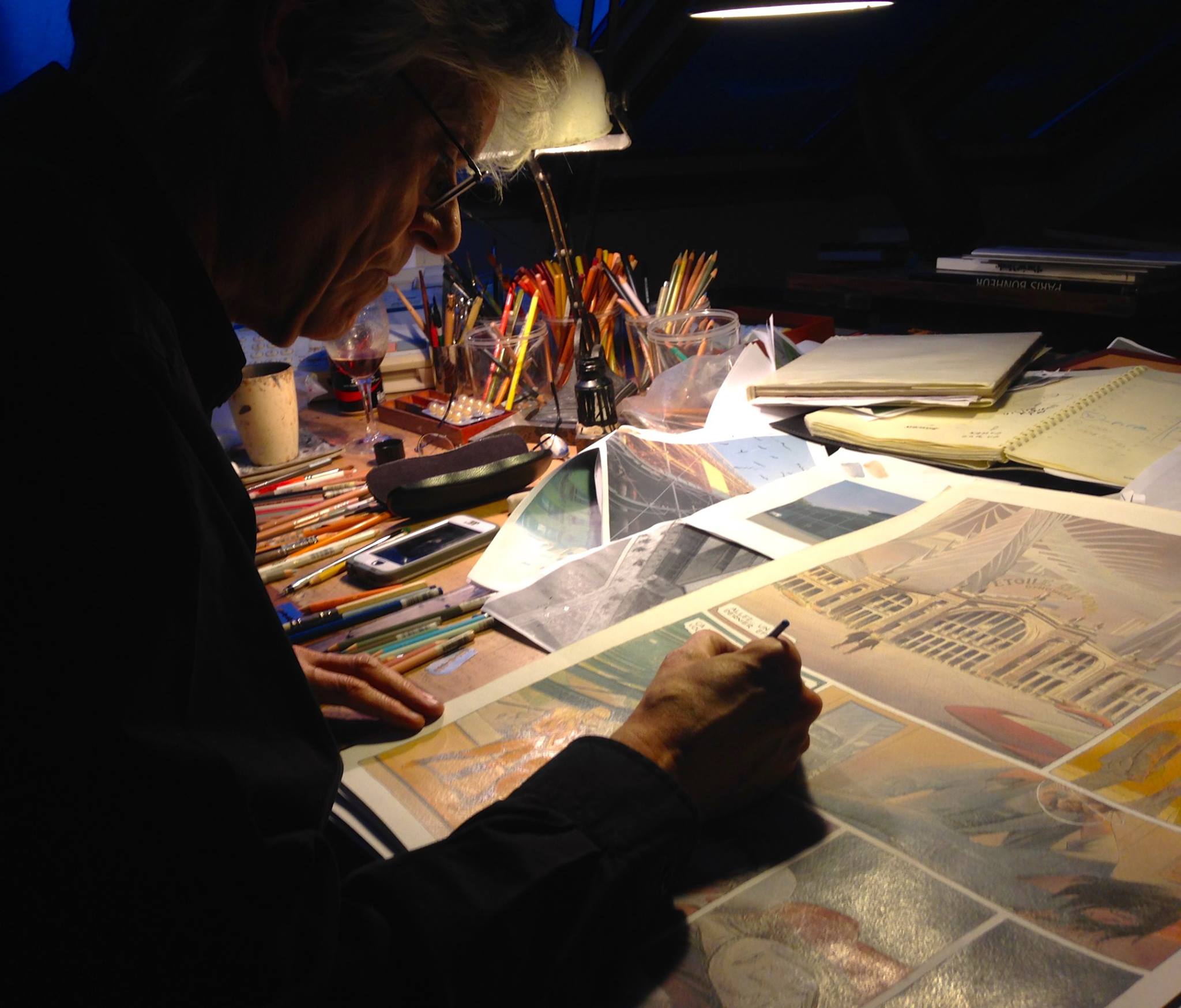 Early July 2015 Francois Schuiten had an interview with Belgium AZ-ZA about the progress of the album.

During the interview you can get the first glimpses of the new album.

Casterman released a press dossier to introduce the new album by François Schuiten and Benoît Peeters. Both authors answer question about the album, the exhibition and the donation of original artwork.

You can download the dossier: Press dossier Revoir Paris

Also a press dossier for the second album was released.