You are here » The Obscure Cities » We need help! » About us 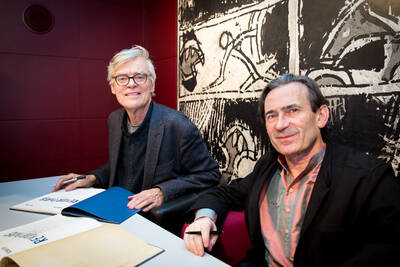 Welcome to Altaplana, the impossible and infinite encyclopedia of the world of The Obscure Cities, originally named Les Cités Obscures and its authors François Schuiten and Benoît Peeters.

François Schuiten and Benoît Peeters started to explore these cities in the early 1980s. In this fictional world, humans live in independent city-states, each of which has developed a distinct civilisation, each characterised by a distinctive architectural style.

François Schuiten and Benoît Peeters didn't only explore this universe by graphic novels, but also by the means of books, movies, exhibitions, scenographics & radio documentaries.

The word Obscure is somewhat misleading for English-speaking readers. In English we tend to think of the word to mean “little known” or “odd.” The French use the word for multiple meanings, including “mysterious”, “hidden” or even “secluded.” ALL of these adjectives could apply to the world imagined in the minds of Benoît Peeters and François Schuiten.

And although not all their work is officially related to the Obscure Cities, they all seem to fit somehow in the concept of their Les Cités Obscures.

On the Obscure Continent Altaplana is the city that is dedicated to hold all the archives of the Obscure Cities. Altaplana was founded in November 747 AT, after the Convention Von Amelunxen decided that all archives had to be centralized in one special place. Altaplana is located west of Urbicande and Alaxis, mid-way between the two in longitude.

The founding of Altaplana was not an immediately success. It took a long time to sort out if the documents have to be archived in alphabetical, chronological or logical order. Even after personal intervention of Governor Arkhalsky the chaos remained.

It was after a long time that Joseph Le Perdriel brought structure in the chaos by implementing a system that allowed documents to be archived in alphabetical, chronological and logical order, all at the same time. This system made it possible in 2011 to lift the embargo on information and open the Altaplana archives for everyone.

The archives at Altaplana contain about 3768 pages and are growing day by day. Enjoy the world of Les Cités Obscures!

The Altaplana website has been founded in 2011 by Joseph le Perdriel to create an archive about the world of Les Cités Obscures on the Internet.

Joseph le Perdriel worked before on the EBBS.net website, since 1996 dedicated to the work of François Schuiten and Benoît Peeters. He found out that information on the internet is not forever and that great information about Les Cités Obscures was vanishing.

Altaplana was created to incorporate EBBS.net and host all information that was still available. In May 2015 also the information of the official website Urbicande.be was incorporated, after this website was stopped.

Altaplana hosts now the most comprehensive dictionary of all topics related to the Obscure Cities and its authors François Schuiten and Benoît Peeters, based on the original dictionary that was made late 90's by Sylvain St.Pierre.

The Altaplana website is not an “official” website, but it could not have become what it is today without the support and help of François Schuiten, Benoît Peeters, the people at Casterman, organisers of events and the large group of dedicated fans of Les Cités Obscures.

You can also read The Obscure Cities: An Introduction by Julian Darius, and the French story Le Devoir de transmission selon François Schuiten by Gilles Ratier, to get more background information about François Schuiten and Benoît Peeters. And although not all their work is officially related to the Obscure Cities, they all seem to fit somehow in the concept of their Les Cités Obscures.

Altaplana is setup as a wiki. A wiki is a web application which allows people to add, modify, or delete content in a collaboration with others. Text is written using a simplified markup language or a rich-text editor. While a wiki is a type of content management system, it differs from a blog or most other such systems in that the content is created without any defined owner or leader, and wikis have little implicit structure, allowing structure to emerge according to the needs of the users.1). This gives the possibility to easily change and add pages to the dictionary. Altaplana is open for everybody who register on the website to add their own information to the dictionary. See also the help us! section to see where we can use your help.

If you have a question or remark about Altaplana you can contact the archivist Joseph le Perdriel by the feedback form.

If you would like to help to maintain the dictionary let us know. You can check the community page to see what help is needed.

Yes, I have composed, I have beautified, I have combined certain facts, but never, never did I do damage to the truth!