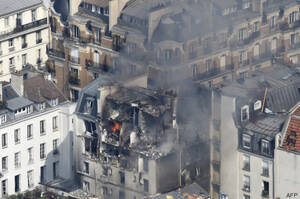 On Friday April 1, 2016 a gas explosion happened in Rue de Bérite in the 6th arrondissement of Paris 1). According to preliminary information, the cause of the explosion is “domestic” and would be due to a gas stove. According to police, a fire broke out first, before causing the explosion that destroyed the building.

17 people got wounded, including 11 firefighters 2). Not much of the building survived and authorities feared that the building would collapse 3)

Benoît Peeters lived on the third floor of this building since 2011. He was not at home during the incident.

On the day of the explosion he wrote: “I think there is nothing left of my little apartment on the third floor right, like some of you knew. Books (many annotated based on future projects), personal and professional papers, manuscripts, original drawings by François Schuiten and several other friends - are probably hopelessly and utterly lost. This is a huge loss, I still do not realize the consequences.”

The next day Benoît Peeters visited what was left of his house. At the scene he had an interview with Le Figaro 4)

Later that day he shared some images of the building on Facebook.

Many Internet users have offered to help rebuild a library, or help launch a call for donations to help him.

Another author was saved in extremis during this blast. Children's author Dominique de Saint-Mars is the creator of the famous youth series Max and Lili. She was in the building at the sixth floor and was miraculously saved by firefighters 5).

On April 25, 2016 Benoît Peeters could visit his home for the first time after the explosion. As he expected nothing could be saved.