La Fièvre d'Urbicande [Fever in Urbicand] is the second volume of the chronicles of the Obscures Cities, published in 1984. This story, which made its debut in the September 1983 issue of (A Suivre) was published in black and white. 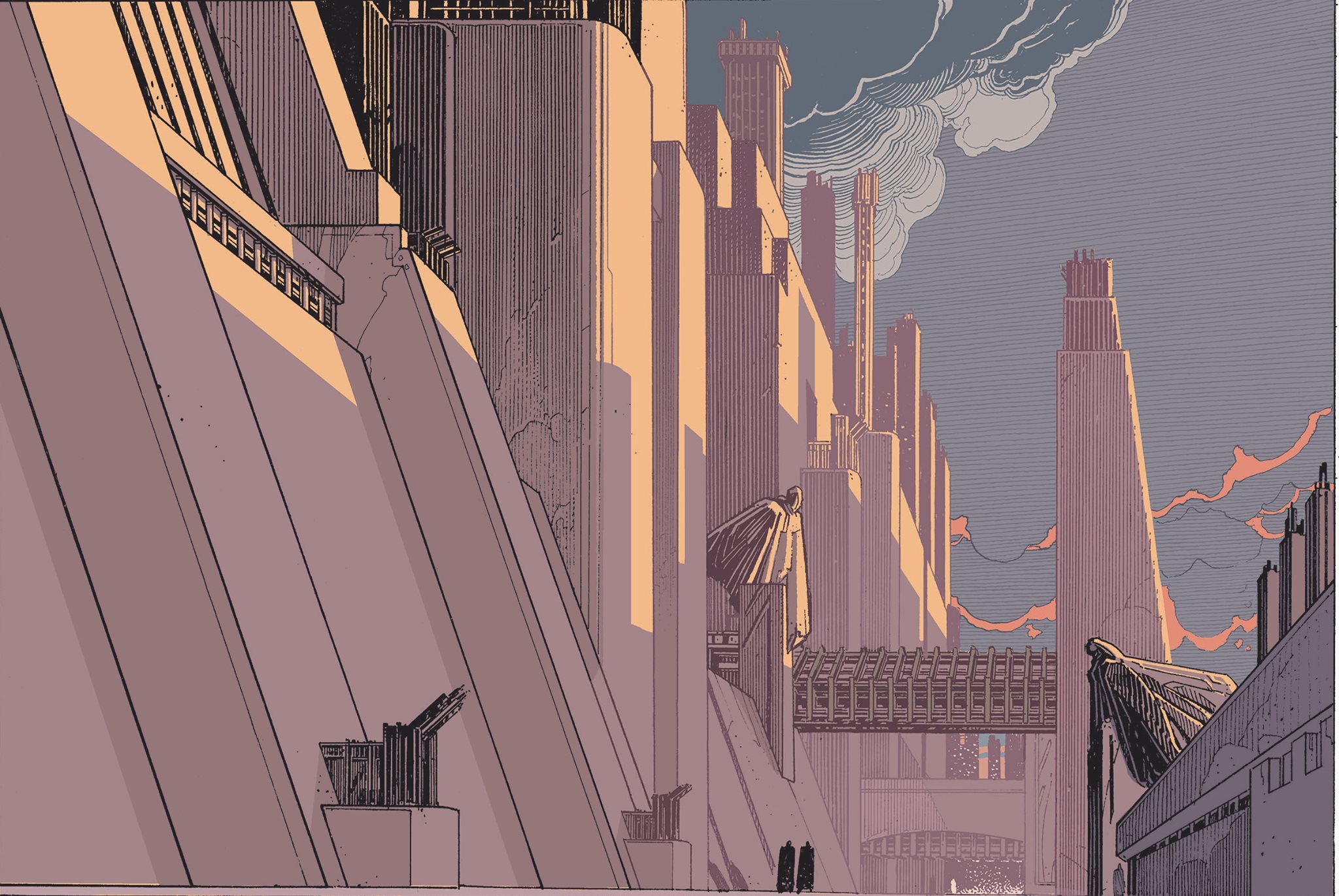 Casterman will publish a new, coloured version of La Fièvre d'Urbicande in October 2020.

This album is not published yet. Information can change over time. This dossier will be updated when new information arrives. 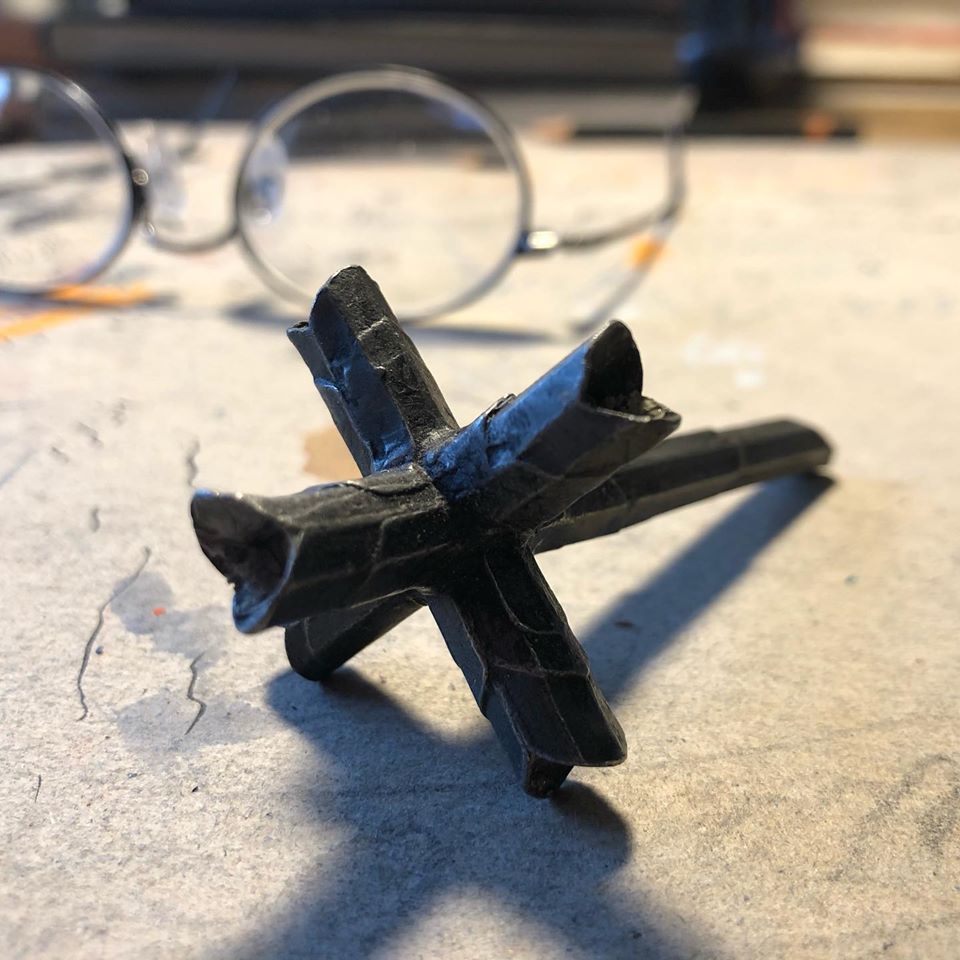 In 2019 the work started to publish a new coloured version in October or November 2020. The colouring was trusted to Jack Durieux, a graphic designer and illustrator from Brussels. Jack is the brother of Laurent Durieux and was also responsible for the "leaning box" that holds the four volumes of the integral edition of Les Cités Obscures.

Durieux designed the full model and the colours of an album. Although he didn't redo the logo of Urbicande's original version nor the series title 1). 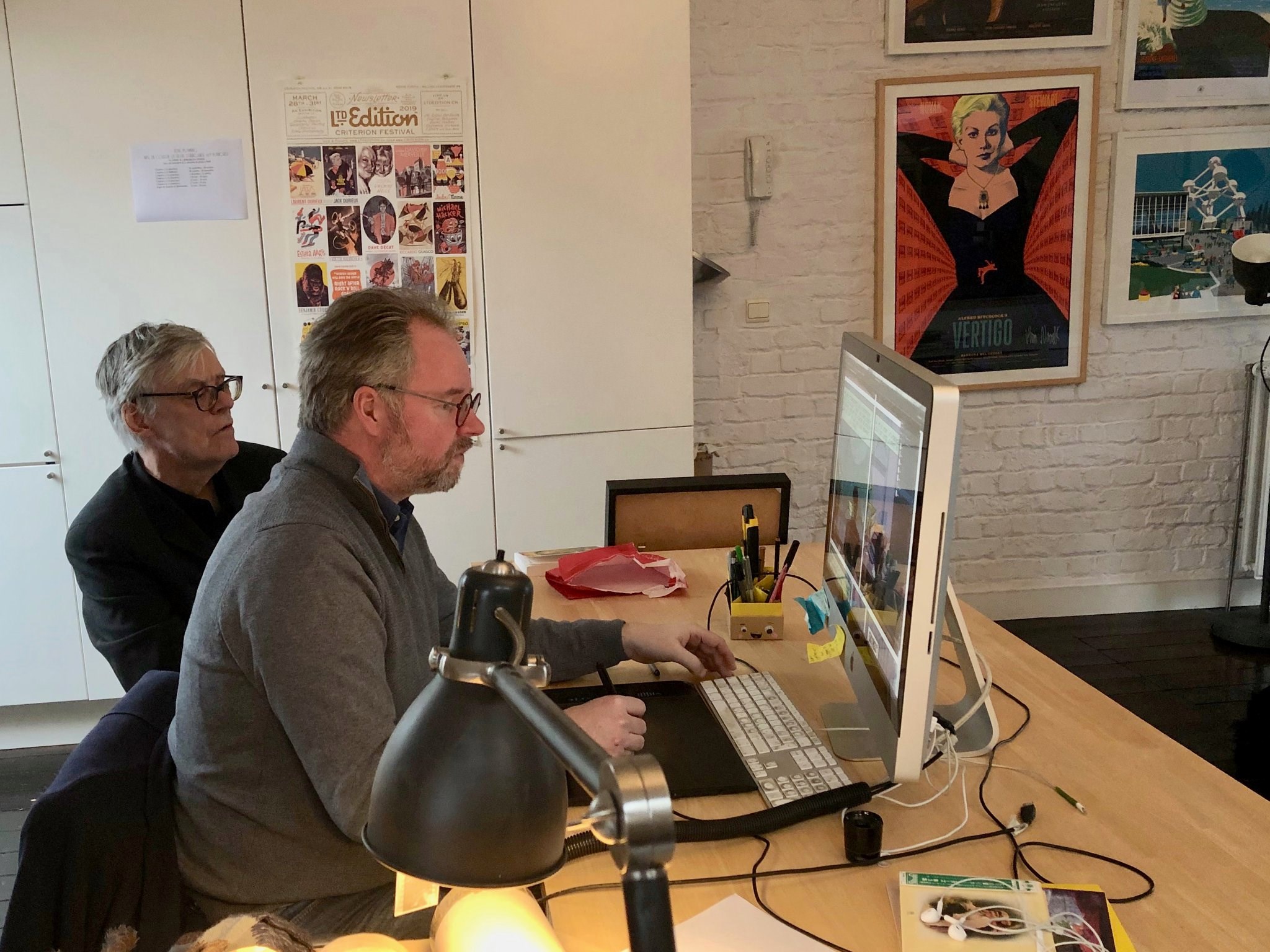 Francois Schuiten and Jack Durieux working on the colouring 2).

The first page of the album is exclusively unveiled at altaplana.be. The colouring looks quite different from the first attempt and seems to follow more the colour pallet that Schuiten used for the image of the front cover. 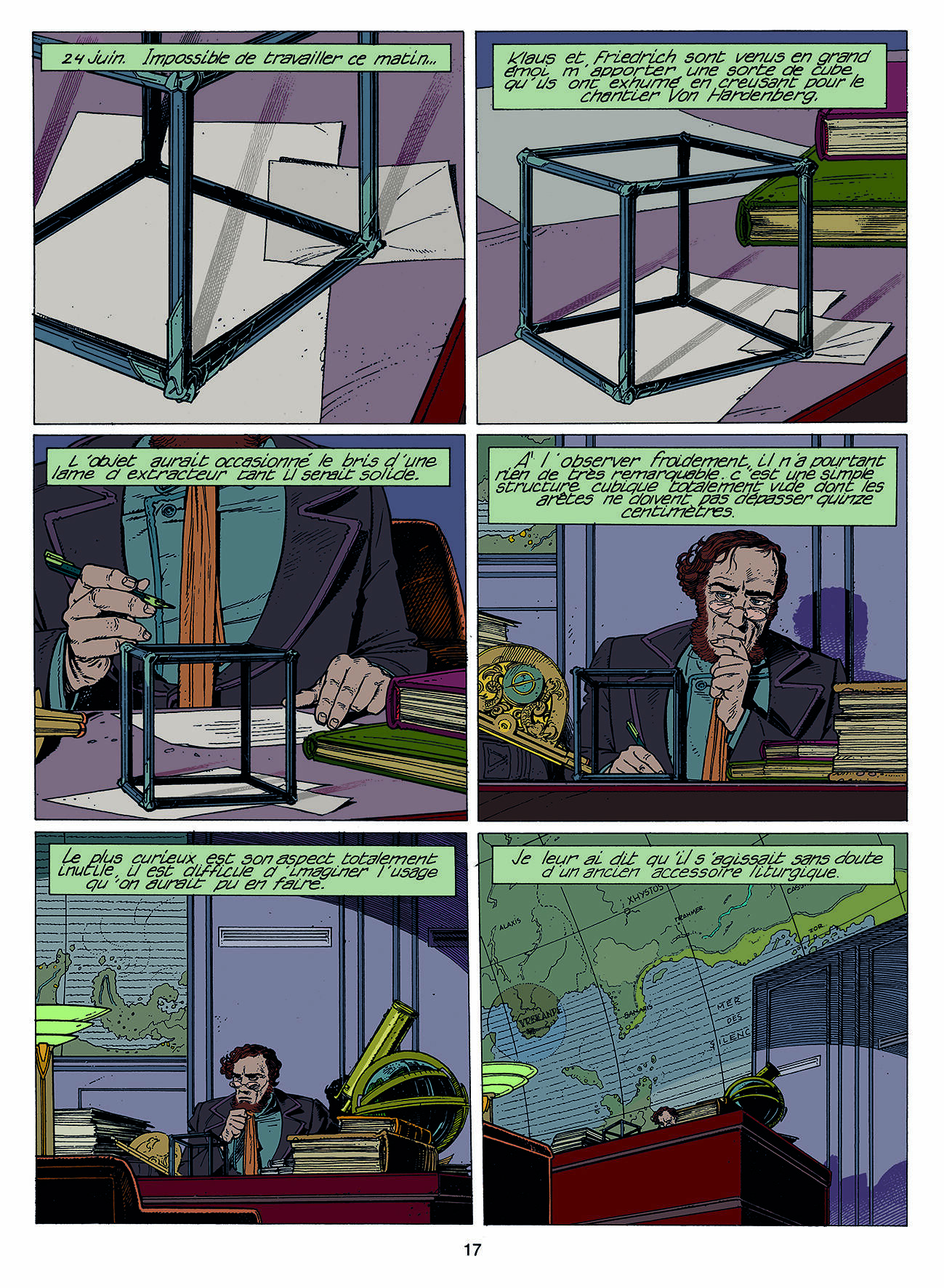 In April 2020, Casterman published a few boxes of this coloured edition. 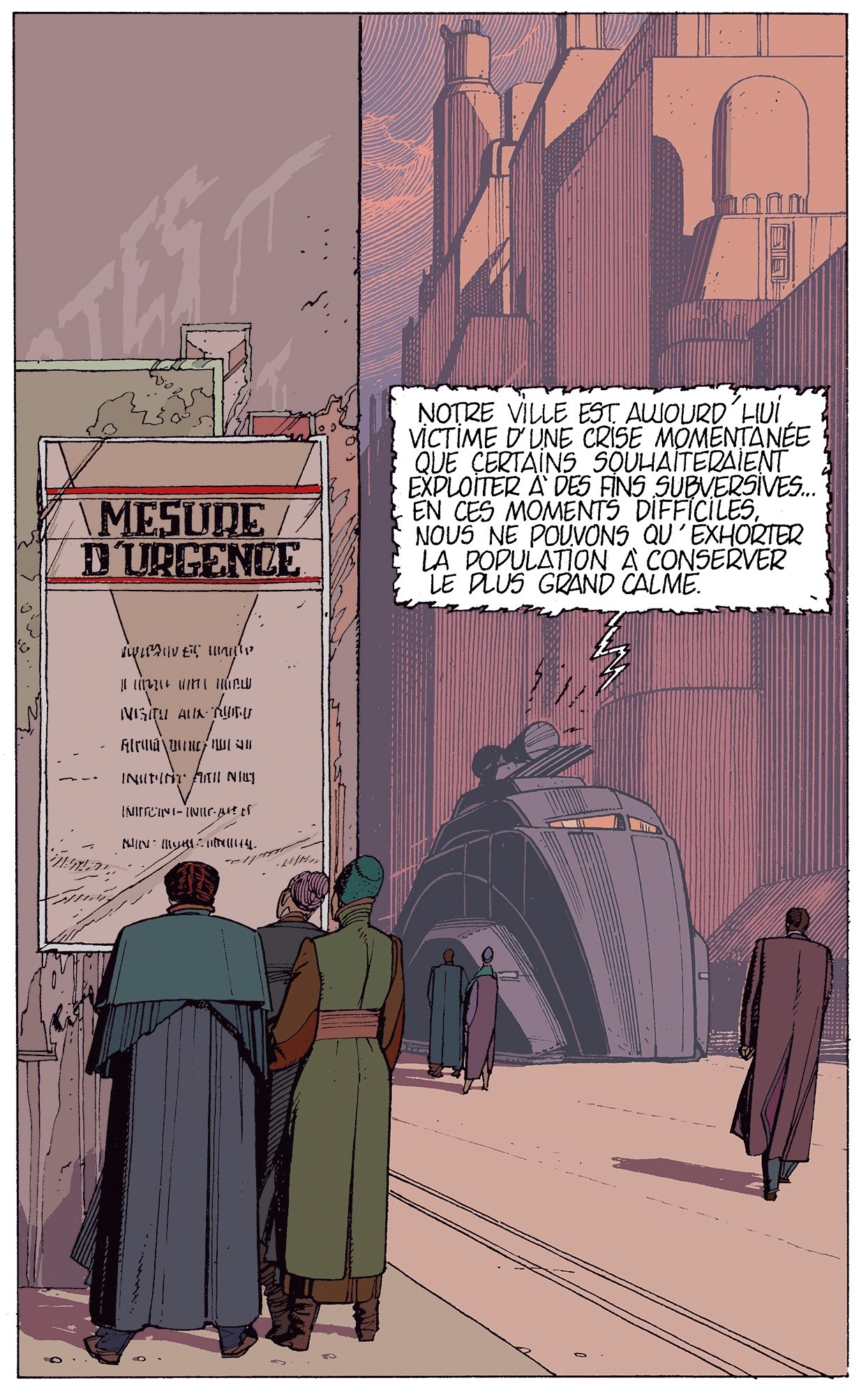 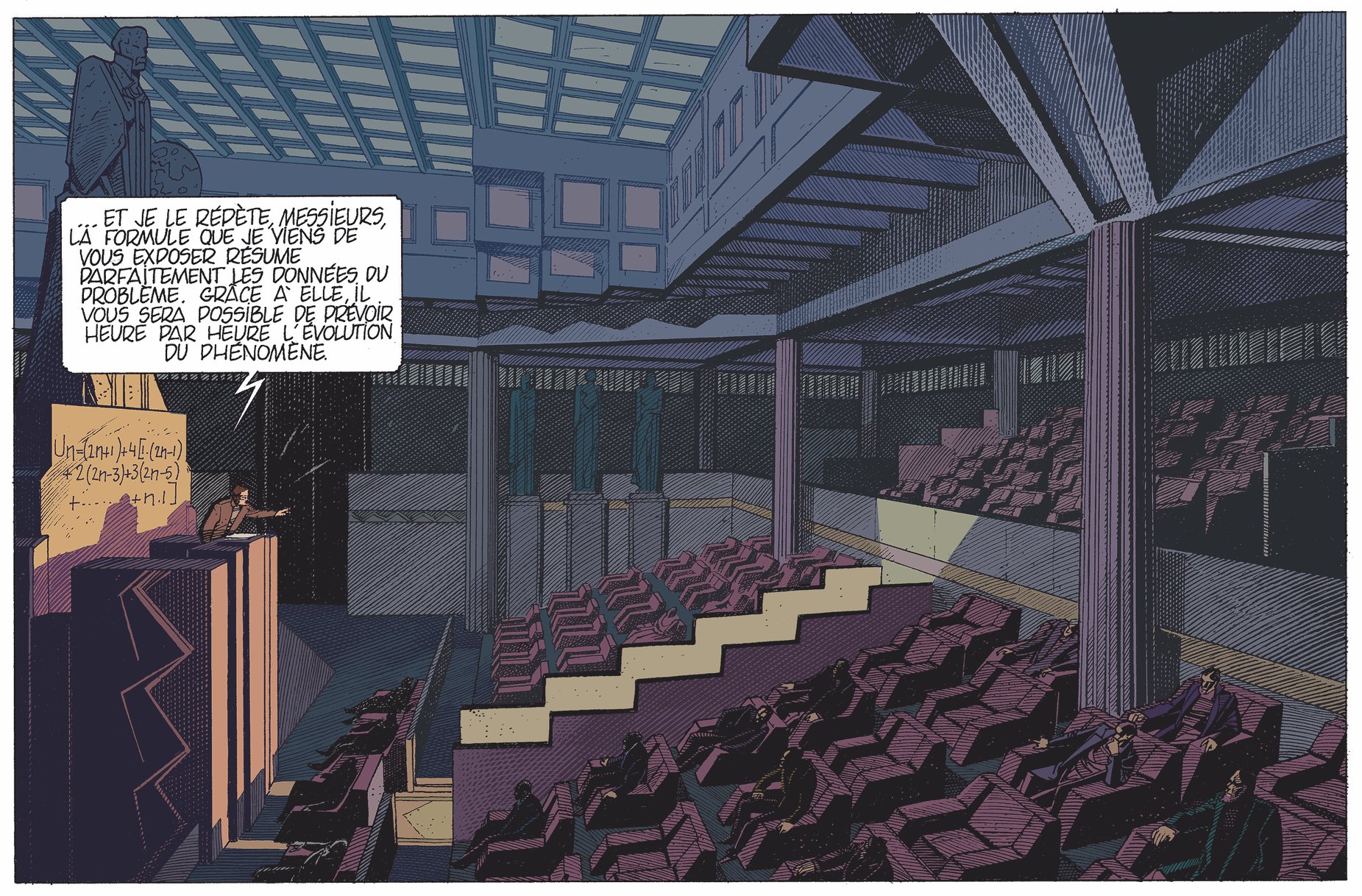 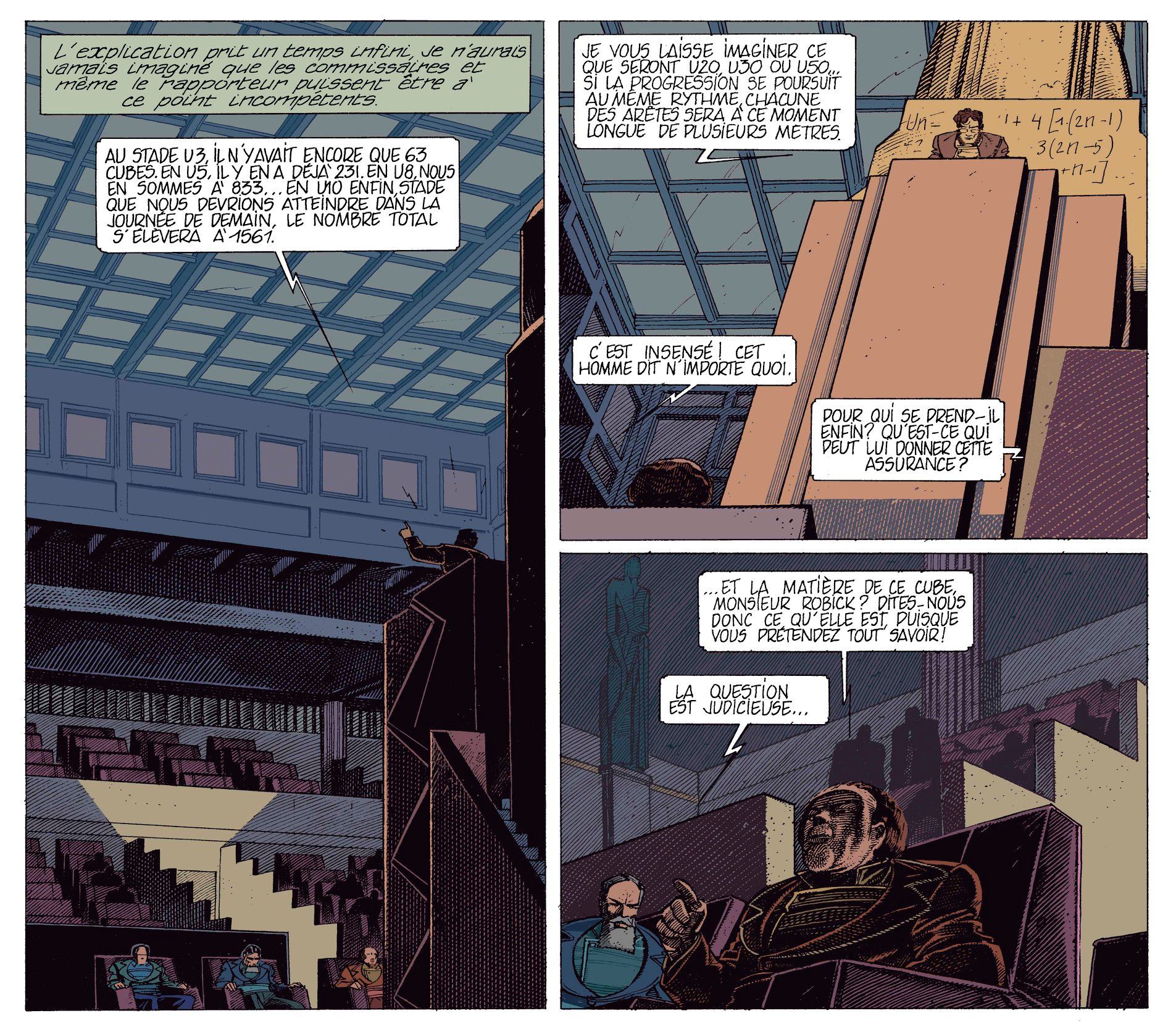 The colours by Jack Durieux can also be found on the announcement poster for Obscure World of the Urbatect (The) exhibition in Tallinn, Estiona.

The coloured edition will get a new cover designed by François Schuiten in 2020.


This image can also be found on the announcement poster for the exhibition Obscure World of the Urbatect (The) in Tallinn, Estionia. 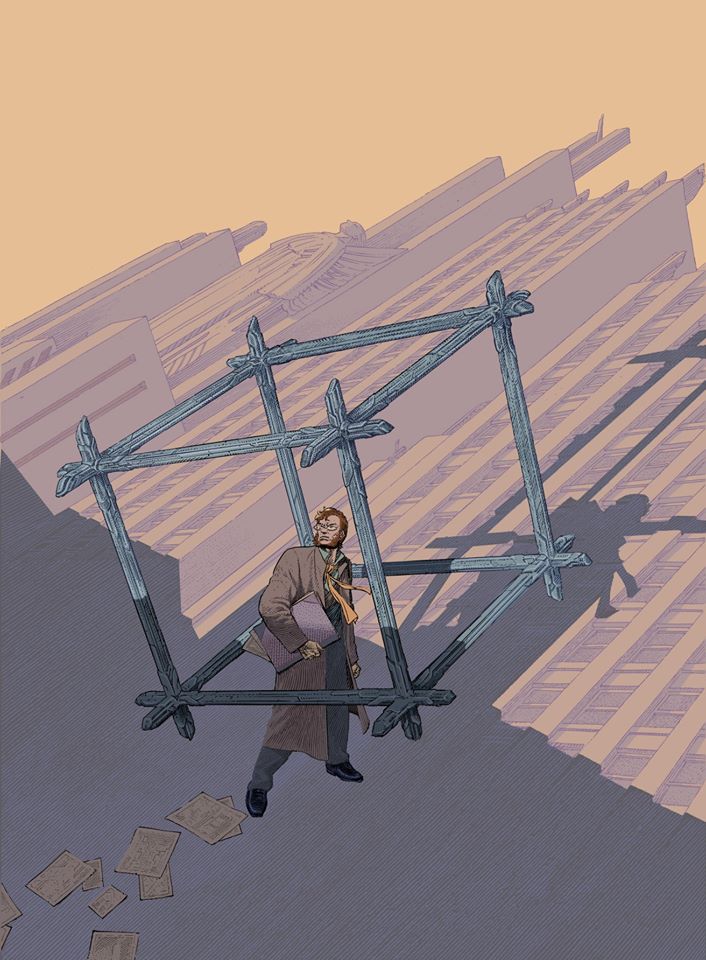 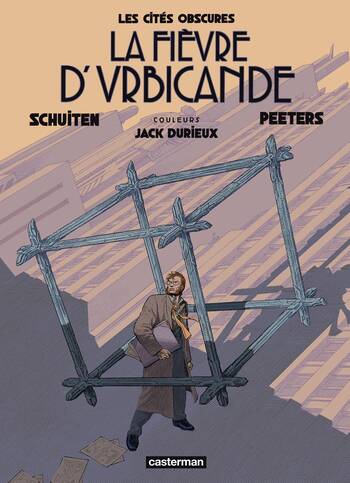 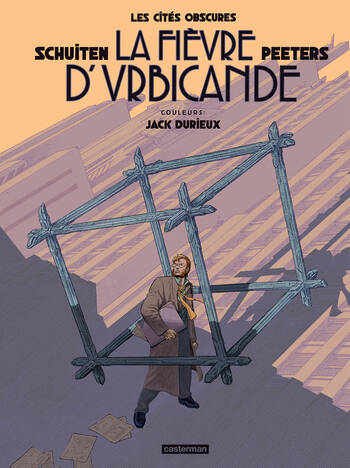 The album will be published in French in a normal and luxury edition 3).

After Les Murailles de Samaris, that was drawn in colour, La Fièvre d'Urbicande was made in black and white. At the beginning, exhausted by the very long colouring of Samaris, Schuiten intended to entrust the couloring of Urbicande to Françoise Procureur. Procureur is a colourist, who worked also with Alain Goffin (Le réseau Madou) and Phillipe Geluck (several Le Chat albums).

Although she was very talented, Schuiten and Peeters soon realized that it would not work as the progress of the colouring was too slow. Françoise Procureur coloured at least two pages in 1983, the period of the prepublication of La Fièvre d'Urbicande in (À Suivre).

These coloured pages were published in a little book called “Histoires de timbres” (published in 2003) and one can also be found on page 64 of “Schuiten & Peeters, Autour des Cités Obscures” (1994). 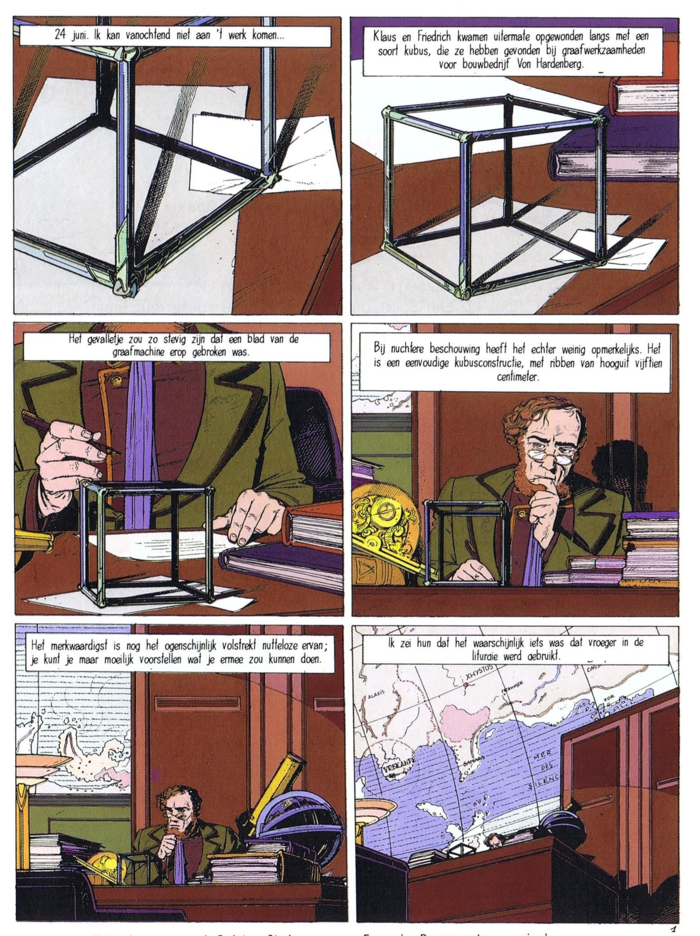 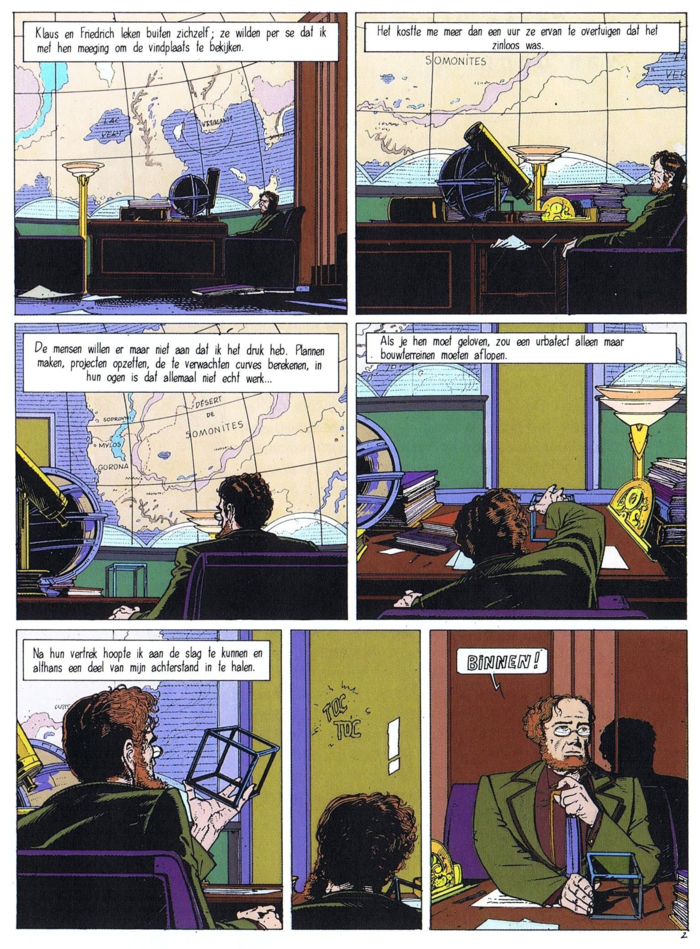 A few chapters were conceived in the idea of colour before Schuiten and Peeters decided to switch to black and white. François Schuiten oriented the drawings afterwards to be edited in black and white. They also changed the pagination and the length of the story. The length of the story was necessary to treat it as a « Roman (à Suivre) » a series that was only published in black & white by then. 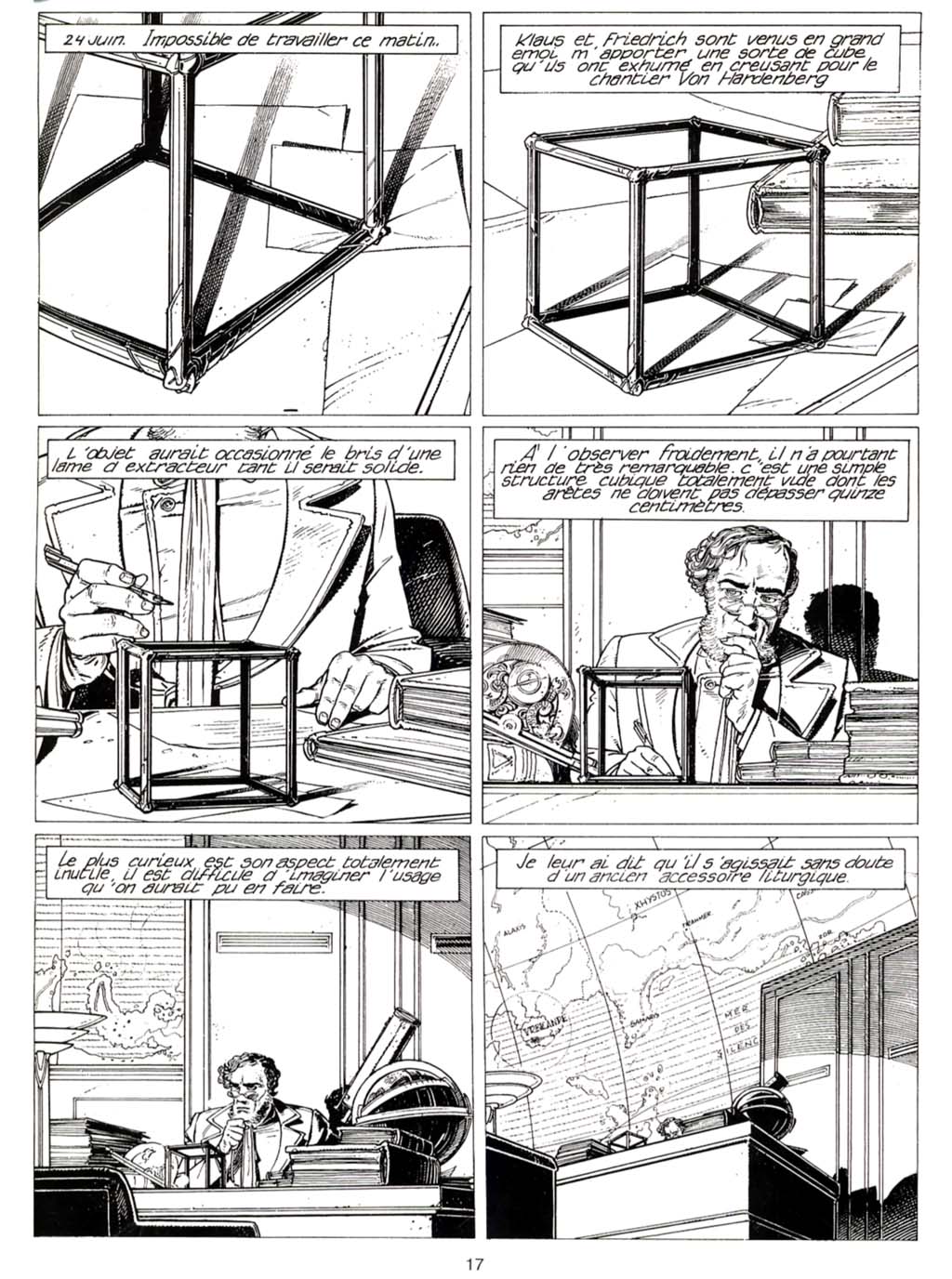 The ideas for coluor in this story has remained in different works. Le Guide des Cités mentions that colured images from Urbicande are rare, but shows two coloured images of the south side of Urbicande.

These images are part of a page of La Fièvre d'Urbicande (page 20). François Schuiten coloured this page himself in 1986 for “Biennale de Venise”. The whole page can be found in a very rare catalog. 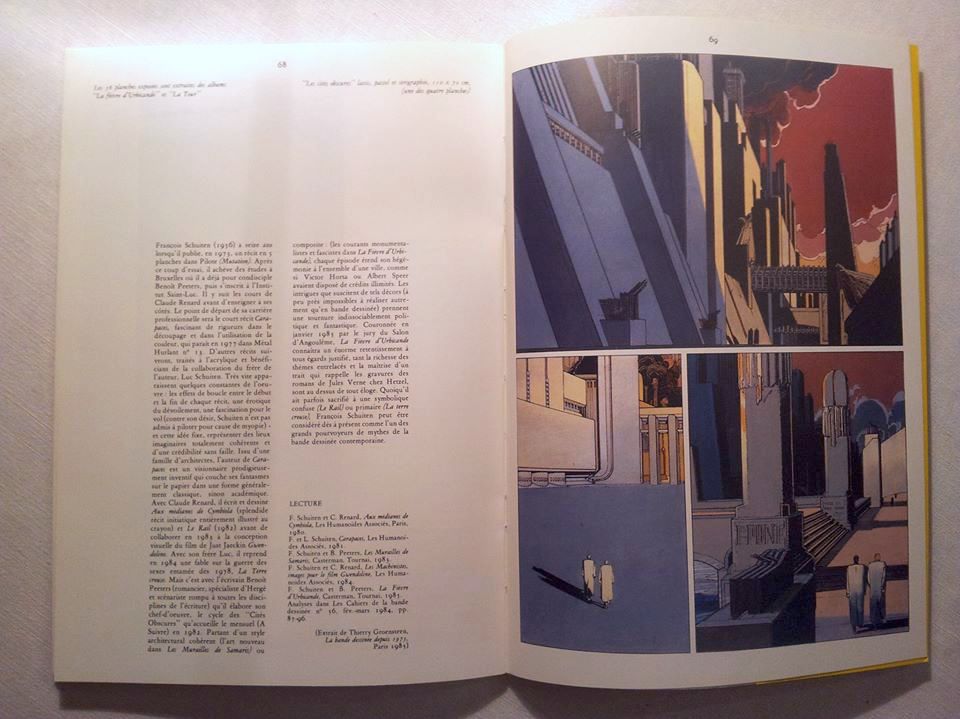 Some details of the page, as published in Le Guide des Cités. 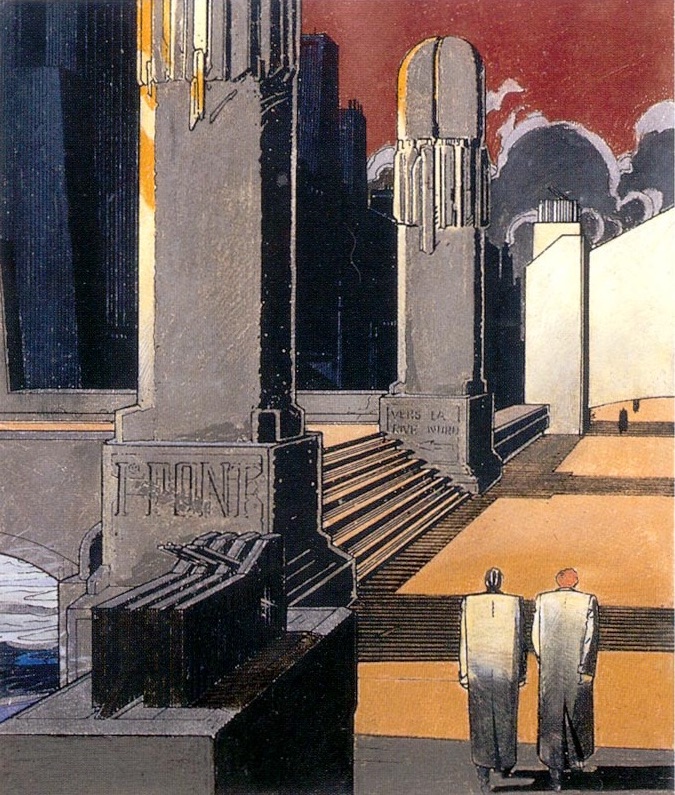 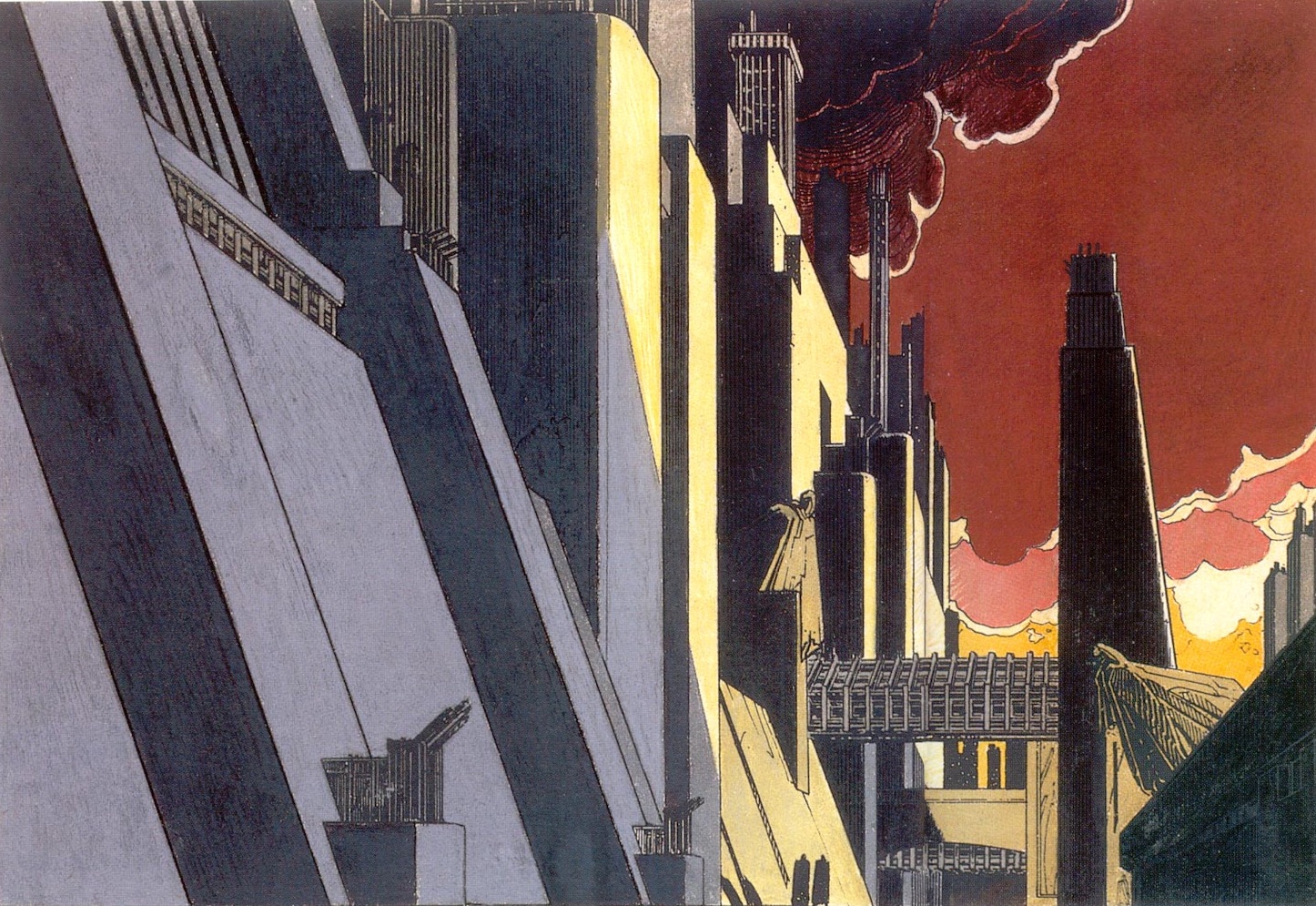 But also during the Exposition “de Bruxelles à Brüsel” Schuiten and Peeters played with colours in La Fièvre d'Urbicande.

On the images below: François Schuiten browsing through the files of the original edition with some coloured images. Some of these images were used in the exhibition “Un Opéra Pictural” (2005). 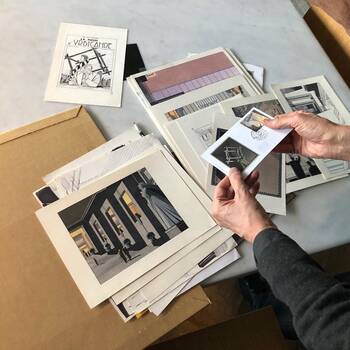 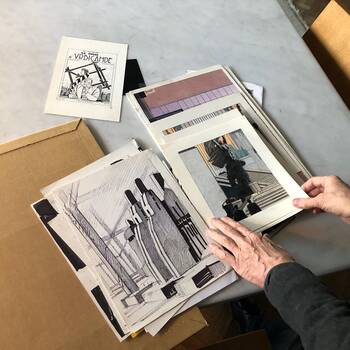 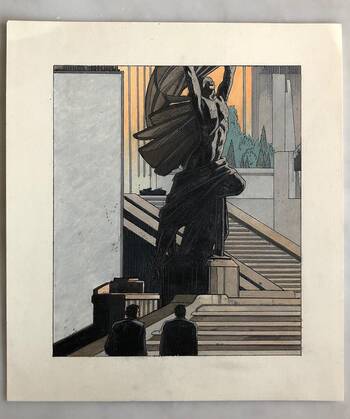 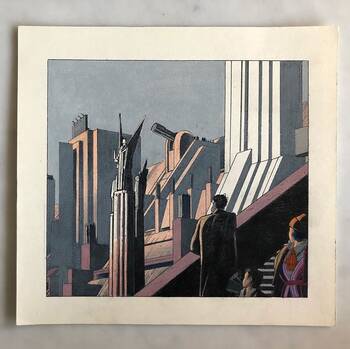 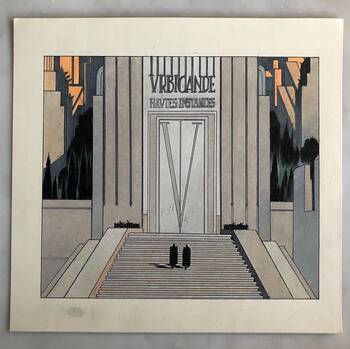 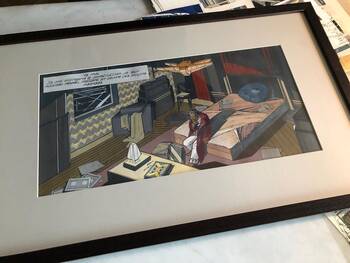 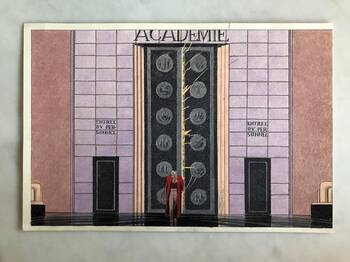 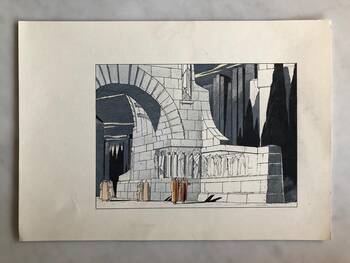 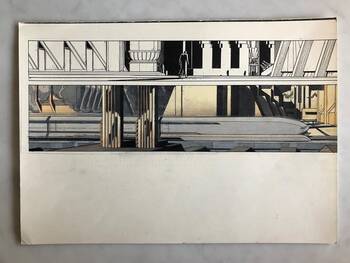 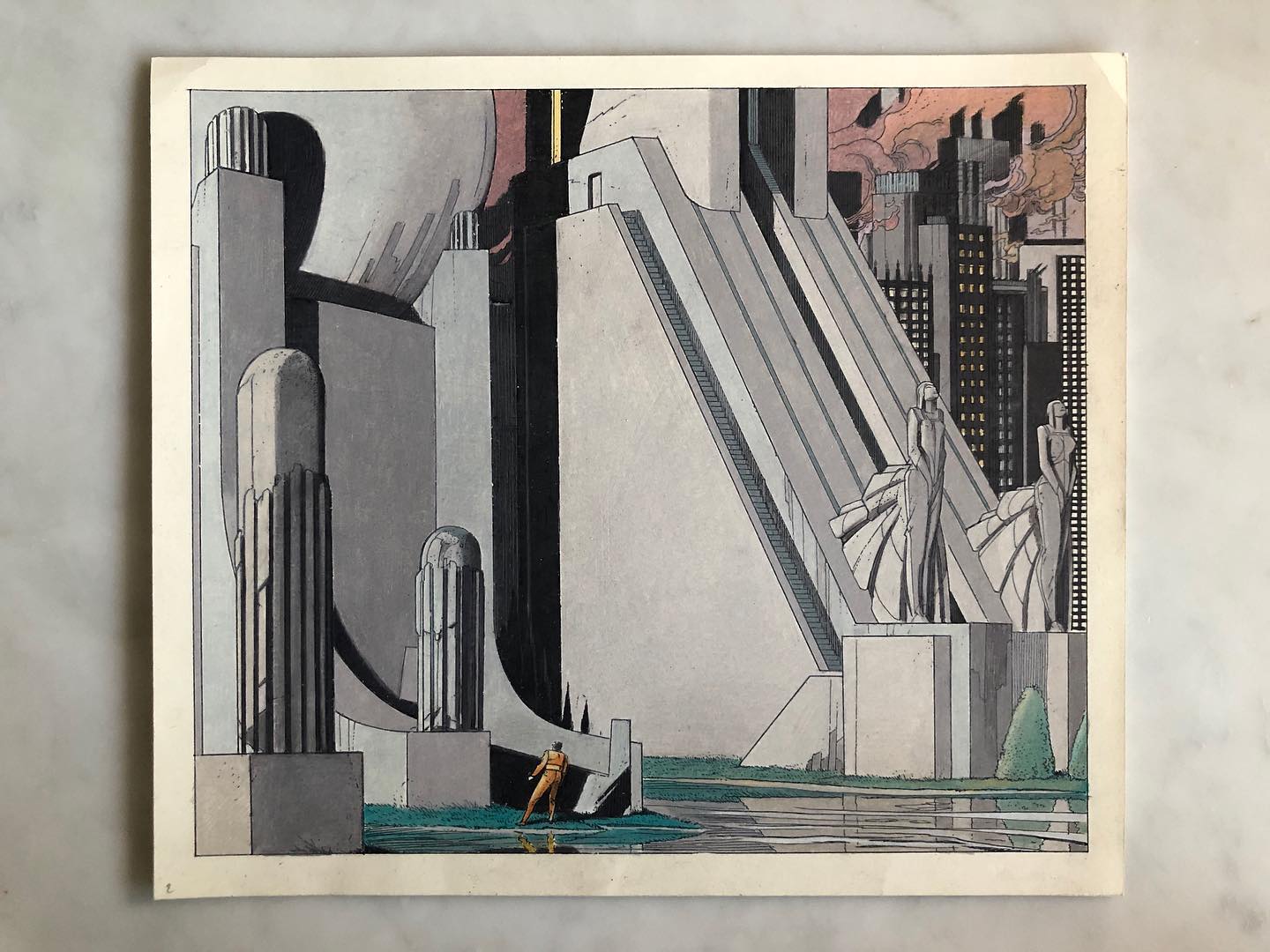 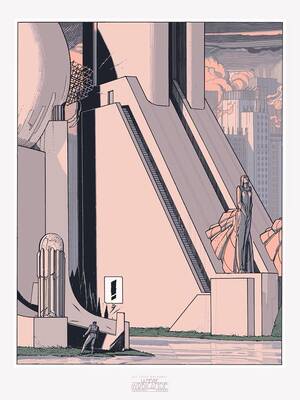 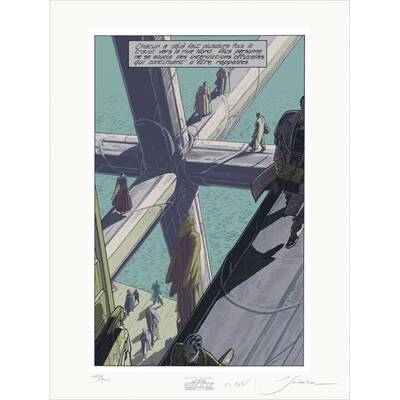 Laurent Durieux worked the next years on the colouring of the Blake and Mortimer album Le Dernier Pharaon based on the black and white drawings by Schuiten.