You are here » The Obscure Cities » Dictionary » Blake & Mortimer

Blake and Mortimer is a Belgian comics series created by the Belgian writer and comics artist Edgar P. Jacobs. It was one of the first series to appear in the Franco-Belgian comics magazine Tintin in 1946, and was subsequently published in book form by Les Editions du Lombard 1). 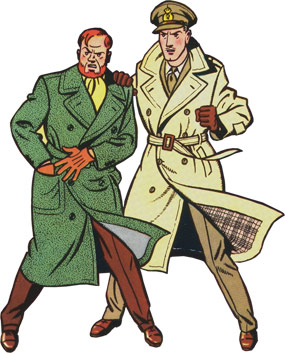 The main protagonists of the adventures are Philip Mortimer, a leading British scientist, and his friend Captain Francis Blake of MI5. The main antagonist is their sworn enemy, Colonel Olrik, who has appeared in almost every book. Their confrontations take them into the realms of detective investigation and science-fiction, dealing with such themes as time travel, Atlantis and espionage 2).

Since the death of Jacobs, new books have been published by several separate teams of artists and writers 3).

Le dernier Pharaon (the last Pharaoh) is the title of the Blake and Mortimer album designed by François Schuiten and co-written by Thomas Gunzig and Jaco Van Dormael. The album is coloured by Laurent Durieux. The album will be released as the 11th album in the “Autour de Blake et Mortimer” series.

More information about this project can be found in the Blake and Mortimer by Schuiten dossier.