You are here » The Obscure Cities » Dictionary » Ziller, Gilles

Gilles Ziller is a serigraphist of our world, specialized in works based on famous bande dessinées. He surely found a Passage, for he is the author of Robick's official portrait 1).

After studies in graphic design, Gilles Ziller taught draughtsmanship at the School of Fine Arts of Nancy and screen printing at the School of Decorative Arts in Paris. At the same time, he produced large-format prints excerpted from comic strip pages. This activity, which has developed on the fringes of the comic strip market, is relatively new.

Gilles Ziller founded the Archives Internationales in 1985 and specialised in this type of luxury auxiliary products. A whole series of ramifications in various forms was based on publication of the screen prints, all designed with a view to a well-defined graphics line: logo, stamp, letter paper, greeting cards, and catalogues.

Gilles Ziller chooses an image for which he feels a purely instinctive attraction. It must be sufficiently colourful; it should offer a good reflection of the cartoonist’s universe, and should have high impact when isolated on a wall.

Screen printing is an excellent indicator of personality. With the pen and brush, there is a gestural beauty, a genuine modulation of the graphic characteristics. Screen printing is the ideal technique for reproduction of tinted areas and line drawings. Ziller casually modifies the images that he uses without fearing sacrilege. Transposition work is needed, with new imperatives, those for a wall image that is no longer a panel in a comic book. He sometimes removes some details and adds light and shadows. 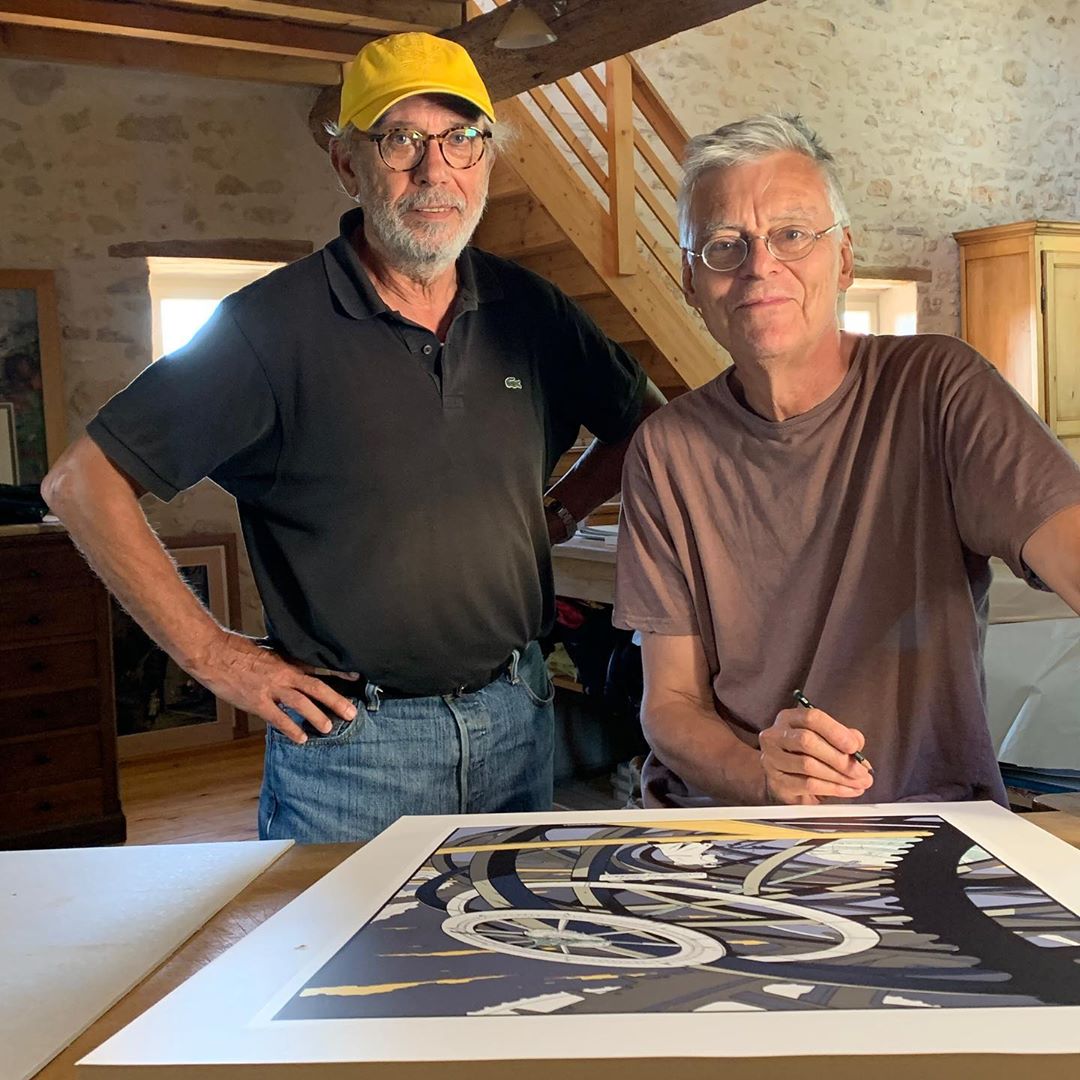 Ziller was the first to publish a screen-printed edition of E. P. Jacobs. Ziller was already working on the pages of Jacques Tardi when he informed Lombard Editions in Brussels of his fascination with Blake and Mortimer; they were surprised by such an interest. At that time, Jacobs was considered part of the glory of the past. Ziller insisted. A meeting was set up with the forgotten author… in the cafeteria of the Delhaize supermarket in Waterloo! On a winter night, in a supermarket car park, after several coded flashes of headlamps, the two men met for the first time. There was no question of comic strips during this interview, where Edgar P. Jacobs talked only about opera, his real passion. The result was this screen printing of over 25 colour passages excerpted from The Yellow Mark and signed by the author. As an aside, it was Jacques Tardi who drew the attention of the screen printer to this exemplary case of the narrative art of Jacobs 2).

After this first production in 1980, Gilles Ziller and E.P. Jacobs met regularly until the death of the latter in 1987. Rather reserved and living in seclusion at that time, Jacobs showed interest in the screen-printing work and was always very attentive to the transcription made of his drawings, in regard to both the layout and the colours. A keen Jacobs fan, Ziller acknowledges that the man himself did not disappoint him and that for him he remains the “Great cartoonist” 3).

Gilles Ziller has made also several serigraphs of work by François Schuiten.