Les Portes du Possible is a series that started in January 2005 when Schuiten and Peeters published weekly a full page in a few Belgium newspapers. In line with the spirit of the Obscure Cities, but from a different angle, Schuiten and Peeters presenta way of “prospective fiction” or “fictional utopia” that explores the most unexpected conjectures about our near future.

With this project Schuiten and Peeters wanted to bring drawings back to the newspaper. A new series for not only those who like comics but for a broad audience.

The series were first published in the De Morgen, Le Soir and the Courrier International. Later on also in the Italian newspaper Il Sole 24 ore.

The series of pages were published by Casterman in an album in 2005. The book is presented as a series of twenty subjects (one theme per page, each of which can be read independently of all the others) and takes the visual form of a “true-false” newspaper combining text and images. According to the subjects treated in the course of the publications and the sections (politics, sport, science, arts, etc.) of this imaginary newspaper, Schuiten and Peeters have situated their publication at various times in the future (2024, 2030, 2037, etc.), but always in a future “within reach”. On the menu of the chosen themes: genetic manipulation, climate change, new materials, rail transport, funeral rites, the evolution of Europe, etc.

Schuiten and Peeters never were really happy with the way the album turned out. Together with Jack Durieux they will revisit the album in 2021.

Some of the pages of Les Portes du Possible.

With the start of the series François and Benoît gave some interviews telling about why and what of this project. 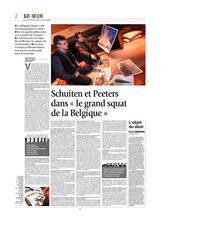 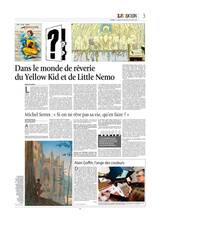 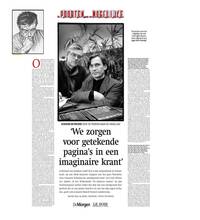 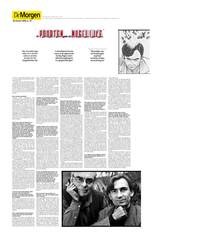