You are here » The Obscure Cities » Dictionary » Finart, Jack 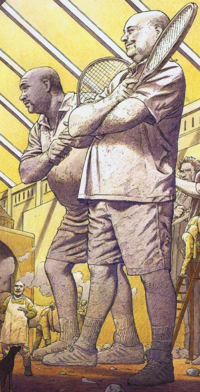 Jack Finart is the heir of the champagne house Gault-Finart. When he was 47 he ordered two huge statues to be used to decorate his grave. He asked Giovanni Rinardo to build them for him. When they were finished he was not happy with the looks, although Giovanni explained that there could be no difference in the statues and real life. Finart demanded the statues to be changed.

A few weeks later he died suddenly during a tennis match, leaving his third wife behind. During his funeral in Wilry-les-Reims the party could not find his grave due to the changes made to the statue. 1).