You are here » The Obscure Cities » Dictionary » Rollini, Valeria 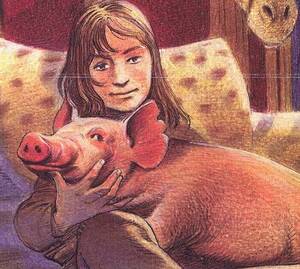 Valeria Rollini is the 12 year old heir of the perfume empire Siloé. Valeria is very ill and in need of new organs. Doctor Eric Wagner has manipulated the DNA of a pig called Ropsa to become compatible with Valeria. But they made the mistake to introduce Ropsa to Valeria. They have become best friends. According to Valeria is makes no sense to take organs from Ropsa because then she will loose her best friend.

According to psycho analyticus Serge Tisseron is was clearly a mistake to make personal contact with the pig instead of seeing it as a toolbox.

This affair is attracting a lot of attention. Franco Dragone is planning to make a music spectacle called Pig. Pope John XXV is defending the girl Valeria for her rights to have dignity. Even Jean Bentas, who won recently the nobel prize for literature is commenting that corps and porcs are anagrams 1).

In 2017 eGenesis reported the birth of 37 PERV-free baby pigs in China, 15 of them still surviving 2). The black-and-white piglets are now several months old, and they belong to a breed of miniature pigs that will grow no bigger than 150 pounds—with organs just the right size for transplant into adult humans 3).