You are here » The Obscure Cities » Dictionary » Vandergracht, Marie-Louise 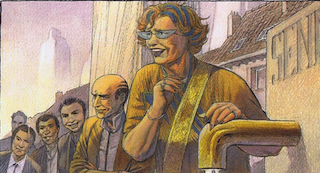 Marie-Louise Vandergracht, named Mary-Lou Delafosse in the French edition. Minister of Tourism for Brussels in 2030. After Brussels decided to petrify its buildings in stone, she decided to flood certain neighborhoods. Due to the petrification the houses became water tight so the streets became canals. For 150 years the river Senne was roofed but now it is again a real river 1).