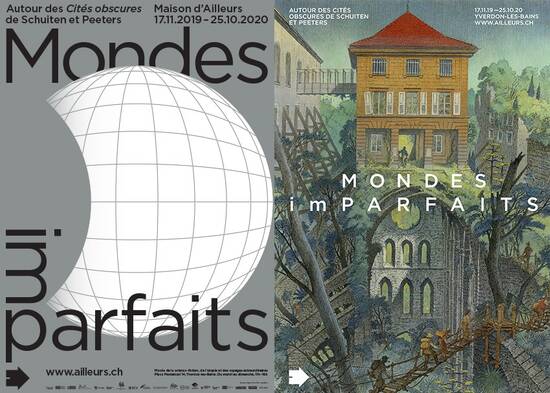 “Mondes (im)parfaits and Les Cités obscures of Schuiten and Peeters” is a major exhibition reflecting on the relationships between utopias and dystopias. To this end, the Maison d’Ailleurs in Yverdon-les-Bains (Switzerland), has conceived an ambitious project that combines the works of Schuiten and Peeters – exhibited for the first time in a Swiss museum – with the works of the Swiss artists Sébastien Mettraux, Louis Loup Collet and Thomas Crausaz, as well as multimedia devices created by the HEIG-VD. The museum’s historical collection will shed more light and offer a fascinating historical perspective 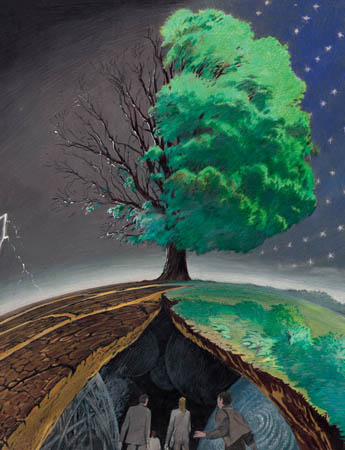 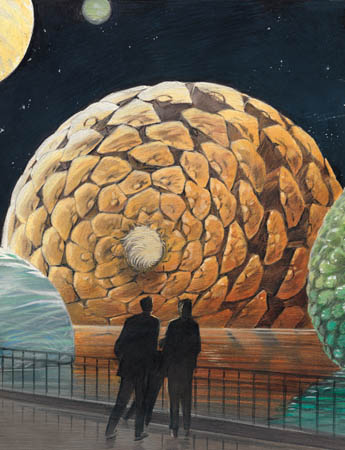 Many original pages of Les Cités Obscures stories are on display, together with a monumental digital creation by Sébastien Mettraux, the works of young Vaud artist Louis Loup Collet and the Valaisan artist Thomas Crausaz, as well as the cinemagrams of the HEIG-VD (University of Engineering and Management of the Canton of Vaud).

See Mondes (im)Partfaits - vernissage for more pictures and videos of the exhibition. 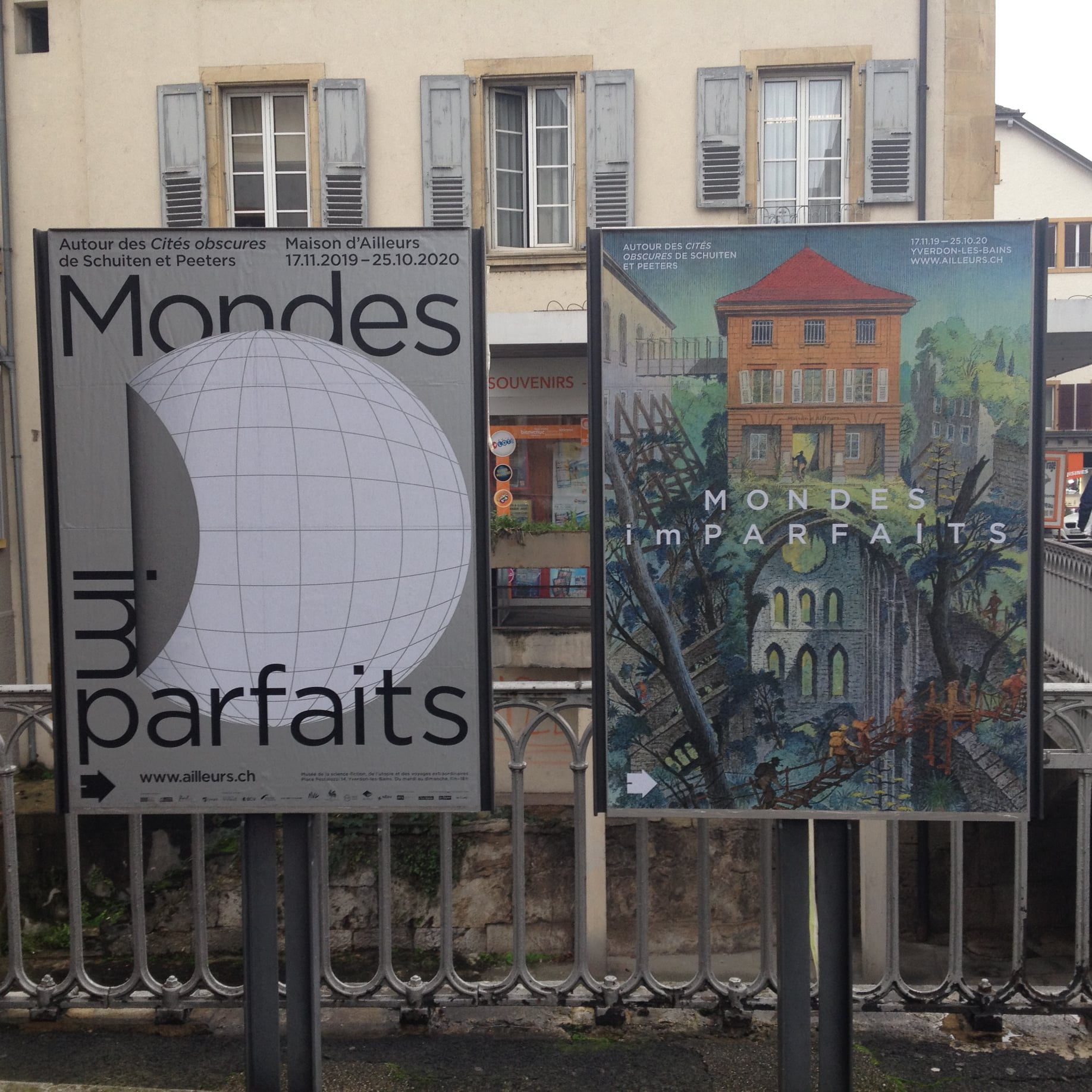 Since the end of October 2019, the people of museum Maison d’Ailleurs had to break down “L'expo dont vous êtes le héros” and build the Mondes (im)parfaits exhibition. During activities Maison d’Ailleurs posted several images.

On November 13, 2019 Maison d’Ailleurs held a press meeting with all the artists (only Thomas Crausaz could not attend) whose work is on display during the exhibition.

RTS Radio discussed with François Schuiten and Marc Atallah, director of the Maison d'Ailleurs in Yverdon-les-Bains, how the scientific discovery of 3 “potentially habitable” exoplanets feed our imagination, but also fiction. 3)

The opening of the exhibition was on Saturday November 16, 2019. The museum has organized an extensive program around the opening. Open to all and free of charge, this event gace the opportunity to preview the exhibition and to take part in all the activities for that special evening.

See Mondes (im)Partfaits - vernissage for a detailed report on the opening. 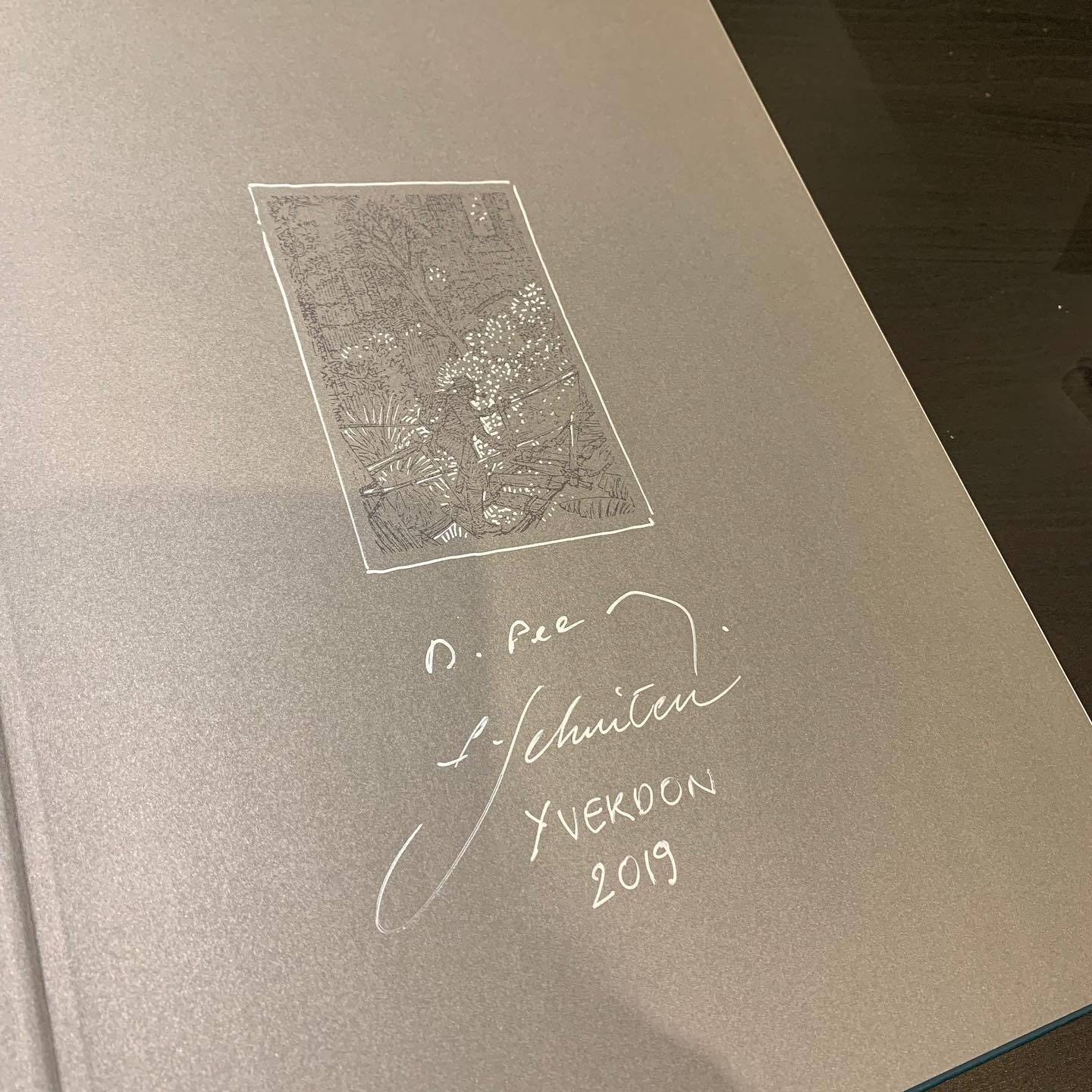 With the exhibition a book was published by Les Impressions Nouvelles in corporation with Maison d’Ailleurs. The book has 128 pages (24 x 32 cm) and 166 illustrations. It is not just a catalog of the exhibition but it is more an extention to the exhibition.

The book has an essay by François Rosset (University of Lausanne) on utopia and a study on dystopia by Marc Atallah (director of the Museum and also Professor at Lausanne).

The third part is a long interview with François Schuiten and Benoît Peeters who give their reflection on their own work and their ideas on utopia and dystopia, more particularly on the way in which the Obscure Cities help question social, artistic, philosophical and human aspects of an imagined but highly recognizable world.

Many rare and unpublished artwork by Schuiten is used in this publication 4) 5). 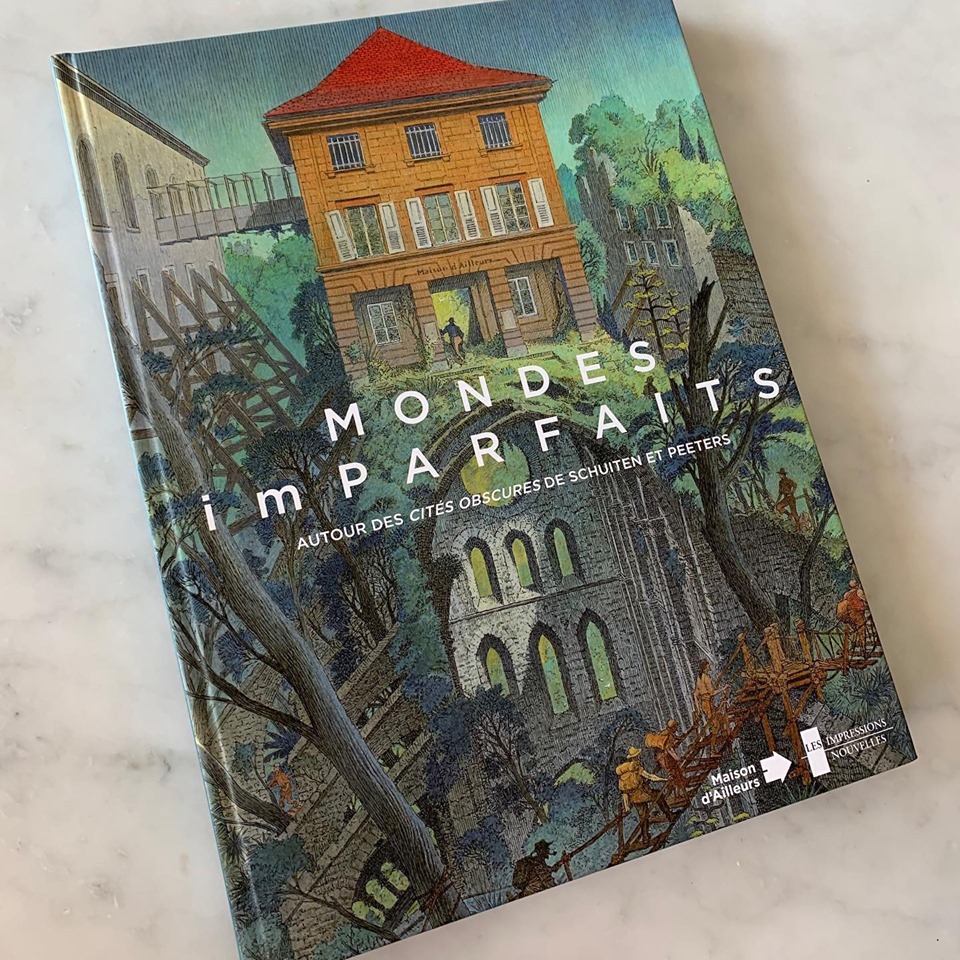 The book is available in bookstores from November 7, 2019.

François Schuiten made a new image for the Mondes (im)parfaits exhibition. The announcement poster was released as a limited signed poster of 200 copies 6).

Also a super limited edition portfolio (limited to 12 copies) was available as of November 16, 2019. The portfolio hold the poster of the exhibition plus six preliminary steps and a certificate, all in digigraphy and bundled in a luxurious box.

Vladimir Peeters made the following video while François Schuiten draw the image. The music is made by Bruno Letort.

François Schuiten shared the making of the announcement poster with the publication of the poster in several steps. 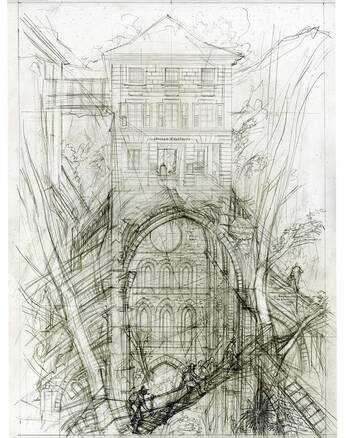 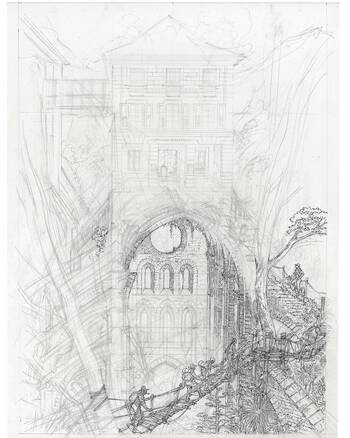 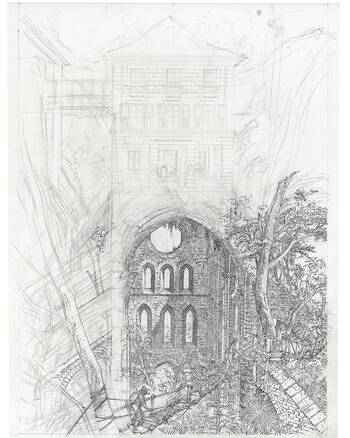 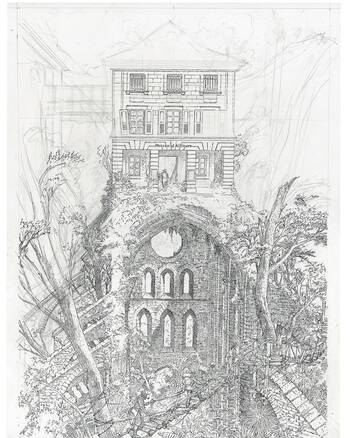 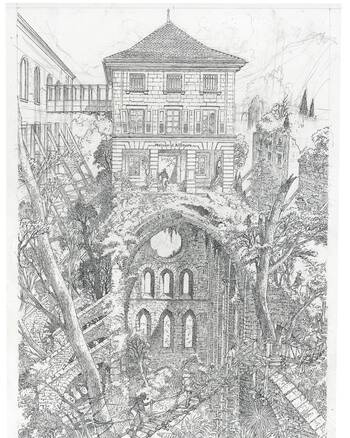 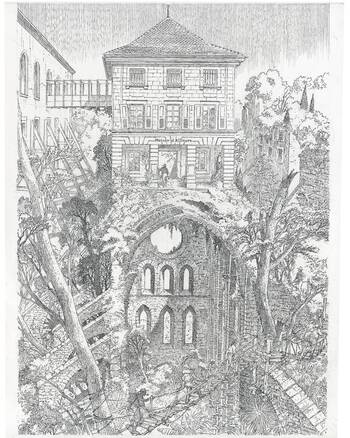 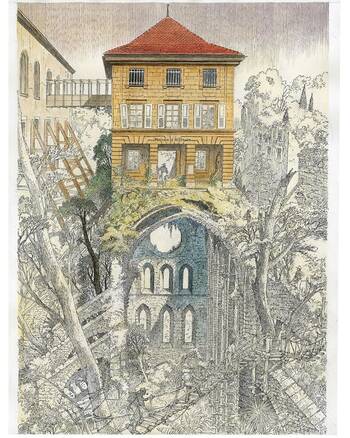 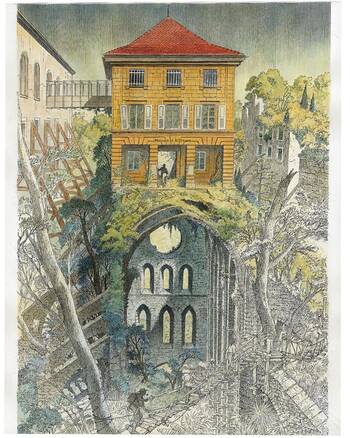 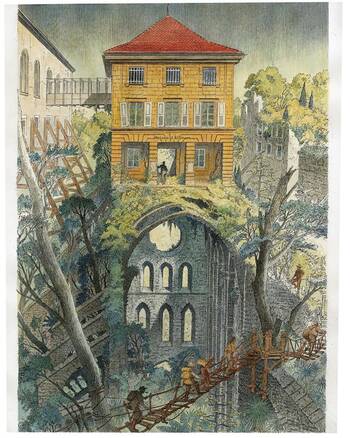 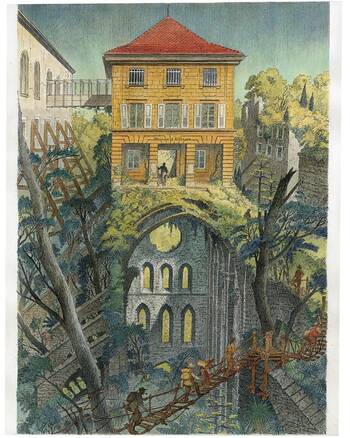 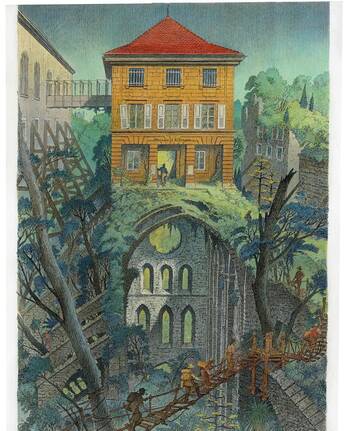 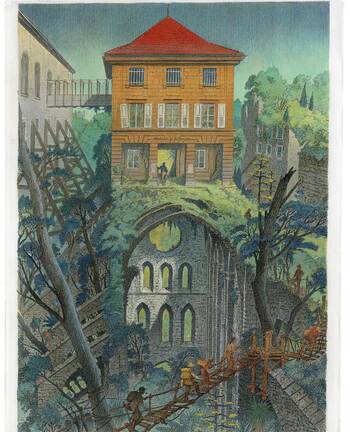 During the exhibition you can ask for “The Echo of the Cities” and carry out your investigation on a tablet! This small digital diary invites visitors to the exhibition to explore the fantastic architecture imagined by Schuiten and Peeters, from the Murailles de Samaris to the Urbicande network, as well as the Brüsel skyscrapers. An exclusive report from our special correspondent which reveals the existence of a new obscure city governed by a certain Pestalozzi, and presenting surprising similarities with the city of Yverdon-les-Bains! This interactive tour is available for young visitors (from 8 years old) as well as for adults. It is available in three languages (French, German, English) and can be downloaded from Geologix or made available free of charge on the museum’s iPads.