You are here » The Obscure Cities » Dictionary » Letort, Bruno 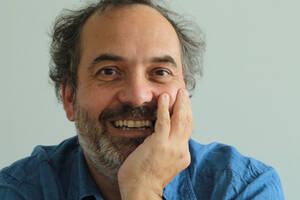 Bruno Letort is a prominent figure on the contemporary French music scene. Formally trained in composition and harmony, his work is characterized by a deliberate indifference to sylistic boundaries. His orchestral pieces, his numerous string quartets and a ground-breaking interactive opera are evidence of an open-minded sensibilty as much to the American repetitive movement as to Eastern European tradition or ambient and electronic music. He has composed interactive inter-disciplinary works for stage, film and ballet. An educationalist, artistic director and writer, he has been a producer at France Musique since 1994, where he founded the National Radio label “Signature”. As producer, he has collaborated with Pierre Henry, Fred Frith, Hector Zazou, Jean-Luc Godard and Elliott Sharp.

He has accomplished the tour de force of being able to interpret the partitions found in the papers of Augustin Desombres, despite the fact that they had been judged impossible to play. See L'Affaire Desombres.

He joined the discussion on travels to the Obscure Cities in the France Culture program Villes Mondes 1).

In 2015 Bruno Letort joined Schuiten and Peeters on several projects. He composed the music of the exhibitions Revoir Paris and Lumières sur les Cités. The music of the scenography the Train World museum is also made by Letort.

Some music made by Bruno Letort for the Obscure Cities world.

Videos with the music of Bruno Letort.