You are here » The Obscure Cities » Dictionary » Xhystos 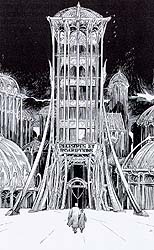 Xhystos is an ancient Obscure City in the east of the Continent. The inhabitants of The Tower already knew of its existence 1). It was one of the first to reconstruct itself; based only on a few drawings by Victor Horta 2). Robick lived for five years in that city during his youth 3). Xhystos is an impressive city full of buildings of glass and iron, rust is a constant problem 4). It used to be powerful and dynamic, but is now considered on its decline and is often described as “stiffling”. Directed by a Council of 21 members 5). Samaris is officially under its rule 6). Life in Xhystos is considered to be monotonous. This monotonous life was disturbed by the Man with the Birds. One night the birds were killed and peace was restored 7). Franz Bauer was sent to Samaris because rumors about that city caused disturbance in Xhystos 8). 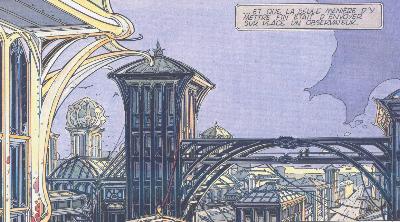 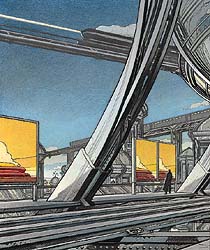