You are here » The Obscure Cities » Dictionary » Pâhry

Pâhry is a major Obscure City, east of the Desert of Somonites. It ruled for over a century over the western half of the Continent, and imposed the use of French as a common language (see Latreille).

Starting in 671 AT, this city was the first to “regularise” itself. It hosted two great Inter-City Exhibits. Its Opera House most probably connects with the Garnier Opera of Paris.

Elephant are almost worshipped in Pâhry, despite the fact that there are no living specimens anywhere near 1). 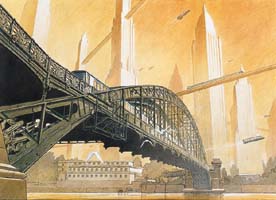