You are here » The Obscure Cities » Dictionary » Elephant

Elephant is a known animal on the Obscure Cities although no living specimen is known on the Continent; but those pachyderms are nevertheless held in high esteem in Pȃhry, for it is said that they allowed this city to win an important battle in the past 1). If the Lighted City of Paris does not seem to be adorned with many representations of this animal, there have been however several such projects.

Researchist Christian Ramette has discovered the plans of an inhabitable elephant dating back to the reign of Louis the Fifteenth, and that would have been erected on the Place de l'Etoile. A certain Monsieur Bonaparte also seriously considered being entombed in a fountain-elephant in the middle of the Place de la Bastille. This last project even reached the scale model stage, and writer Victor Hugo hid one of his characters in it. 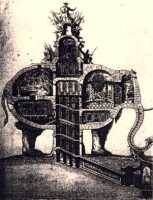 project for an inhabitable elephant-fountain in Paris 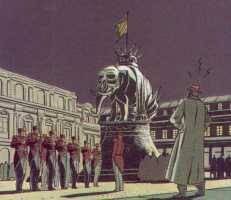 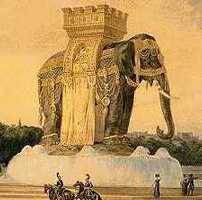 project for a tomb in Paris 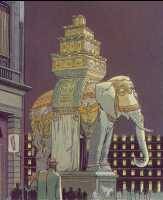