You are here » The Obscure Cities » Dictionary » Maison Autrique 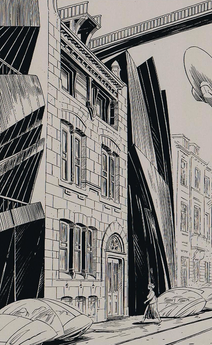 The Maison Autrique, Victor Horta’s first building of note, is a milestone in Brussels architectural heritage. Firstly, this house (built in 1893) represents an essential step in the evolution of the greatest of Belgian architects, and secondly, this building has recently undergone a groundbreaking renovation particularly relevant to a better understanding of the birth of Art Nouveau (the renovation has been executed by the architectural firm MA2, with the help of a specially appointed scientific committee).

The building today resurrected goes to our heart: it is the first significant realisation of a young architect who gave it his all, on the strength of his client’s good will and his wish to make his mark. Stylistically Maison Autrique gives into eclectism, but the use of industrial materials and the premise of an ornamental language based on the curve augur of Art Nouveau. The building is still constrained in forms borrowed from the past, but a breath of fresh air runs through it, the harbinger of much architectural innovation.The mere range of colouring of the house, the richness of which has been reconstructed thanks to many test drills, suffices to cast a totally new light on the work of the young Horta.

In 1893 Horta was 32 years old. Following his internship with Balat, the design of several houses in Ghent and several other projects, his friend Eugene Autrique, an engineer at Solvay, asks him to design a house for him. Autrique's demands were simple: “not a single luxury, not a single extravagance: an inhabitable basement-floor, a dignified vestibule and staircase hall, the living and dining room nicely connecting, a first floor with bath and toilet (which wasn't common in those days) and a second floor for children and servants.” (V. Horta, Memoirs, p. 31) The chosen lot was situated on the Chaussée d'Haecht (Schaerbeek), at number 236 (today it's n° 266), which was purchased on a public sale by Horta himself. 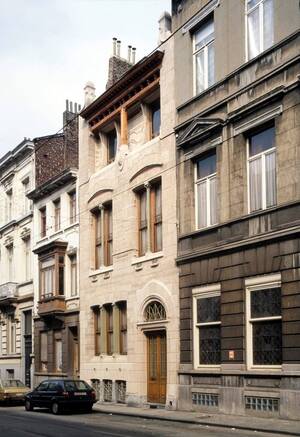 It would be the first manor-house designed by Victor Horta. We can already see elements that form a part of the continual explorations of the architect: the start of an integration with the street, wall-decorations of varying thickness, co-existing symmetrical and asymmetrical shapes, and then there's his revolutionary usage of metal.

At around the same time Horta designs the Tassel Hotel; in the following years he receives a big amount of assignments and the style that will soon become known as Art Nouveau comes into full blossoming. In his memoirs Horta expresses his satisfaction with the house: “he has pleased a friend (…) and delivered an honest achievement” with no input from anybody else. (Memoirs, p.33)

Maison Autrique is an essential place of pilgrimage for everybody who loves architecture and especially for aficionado's of Horta's oeuvre.

According to the letter of Elsa Autrique the house was first in Brüsel and then disappeared 1).

The house was closed for the public from 2015 until Spring 2017. It reopened with an exhibition about Victor Horta in the United States: Horta en Amérique.

Some images of Maison Autrique.

Some videos about La Maison Autrique.