You are here » The Obscure Cities » Dictionary » Maison imaginaire

Maison imaginaire (Imaginary House) is a remarkable restoration project for the Maison Autrique, elaborated by François Schuiten and Benoît Peeters, and very nicely described in a book by the same authors.

It seems that the process has open a Passage to the Obscure World in the attic of the building, where an exhibit on the work of Axel Wappendorf can be found.

The kitchen and the laundry room 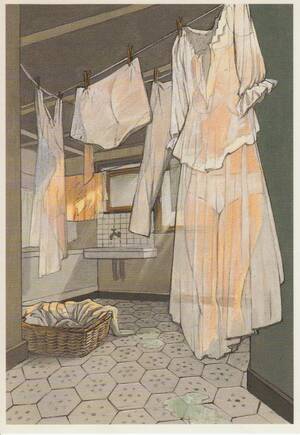 The visitors get invited to go downstairs, to the cellar and explore the kitchen; a remarkably well-preserved space that takes you back to days long gone.

The kitchen has been equipped with a large amount of pots, pans and saucepans. It's as if all the meals that have been prepared here over the years have left their mark. The kitchen will retake its former glory during evenings with thematical dinners and culinary feasts, in an intimate setting.

In the laundry room cloths and clothing are suspended from the ceiling, as if they're hung up to dry. On the fabrics we see the appearance of the men and women that have worn them, thin as a watermark. We hear the sound of streaming water, of laundry being done and steam escaping.

The ground floor has been kept almost completely clear. The first room serves as the entrance and houses the book shop. Visitors can take a seat in the old smoking room and consult a book or magazine. On the walls are pictures and photo's that have a connection with Maison Autrique or its restoration.

The old sitting room of the Autrique family has become the library.

Visitors can sit at the table and peruse the large books that tell the story of the metamorphoses of the Autrique house, in different languages.

A frame hangs on one of the walls. At regular intervals it transforms into a film screen. A little film with sound, but no voices, mixes images of the Maison Autrique with images of Brussels at the beginning of the last century and images of the numerous building sites that thoroughly shook up the looks of the city. We receive echoes of the wars, the modernistic fever, Expo '58, the demolition of the Public House … We also see images of Brüsel, a mirror image of Brussels which is in an even bigger upheaval …

Next to the library is the bedroom, which is mainly occupied by a large double bed, on which we see the image of a sleeping man. The room suggests the memories of nights long gone and shows us a metaphorical world between being asleep and awake.

In the back, the bathroom

This room is not accessible, but visitors can take a peek through the door that's ajar. Inside there's a bath tub and the silhouette of a young woman…

Recent research has shown that the French painter Augustin Desombres, who was a pupil of Gérôme, spent the last years of his life in Schaerbeek, working in this studio. A collection of his paintings, drawings and pictures have been found in the house, as well as a short silent movie of which the author is unknown. The gigantic camera in the adjoining room also belonged to him.

In homage to Eugène Autrique and his passion for cartography this room has been arranged to situate the Maison Autrique in the environment of Schaerbeek and Brussels, in cooperation with the National Institute for Geography.

Another unusual occupant of the Maison Autrique is Axel Wappendorf, inventor and renovator of vehicles. It seems he spent several years working in the attic. A large collection of drawings, models and prototypes of his different inventions and the remains of his comprehensive library have been assembled in the space where they were invented. It's a pity the best working contraptions, on which the reputation of the inventor was built, could not be found.