François Schuiten and Benoît Peeters have won the prestigieus Grand Prize in the Manga category of the Japan Art Festival with their translated version of Les Cités Obscures 1). It is the first time that a foreign author wins this award. The translated Obscure Cities album was chosen over 457 other submissions 2).

The jury report says: “Les Cités Obscures is a series by two men who graduated from the same middle school in Brussels; Schuiten is in charge of the artwork and Peeters handles the script. Though human protagonists appear in the stories, the lead role belongs to the alternate world they populate - its environment, architecture, background. Issued in the bande dessinée format of French-language comics, the series earns praise for the intricacy of its artwork wherever it appears. Now it is finally being translated and published in Japan, where readers may at last savor the sublimity of Peeters' story in tandem with Schuiten's illustrations. The first volume in the series was published nearly 30 years ago, but the story is timeless. Before we start making claims about Japanese manga’s pride of place in the world of comics, we had best acquaint ourselves with the level of comics in the rest of the world. This is one work well worth knowing about. It is one of those rare creations that yields both the pleasure of encountering a foreign culture and the joy of sharing something that transcends cultural differences” 3). 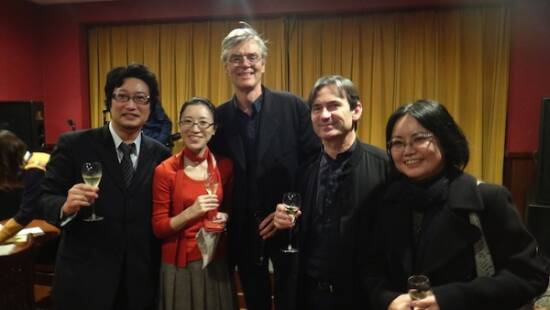 Benoît Peeters and François Schuiten with their Japanese publishers

A “counter-Earth,” almost but not quite like ours, is populated by a mysterious group of city-states: les cités obscures. These serve as the backdrop to the strange events depicted in this popular Franco-Belgian comic-book series, which has been translated into ten languages and has won numerous awards. To date there have been 12 volumes published in the “official” series, with another 12 “spin-offs” for a total of 24 works. Three stories are included in the volume that earned this prize, the first to be published in Japanese, under the title Yami no Kuniguni (Countries of Darkness). They are La fiÉvre d'Urbicande (The Fever of Urbicande), which depicts people confounded by a strange cube that suddenly starts reproducing itself; La Tour(The Tower), which follows the vicissitudes of a man caught up in an adventure that involves secrets related to a huge tower; and L'enfant penchée (The Leaning Child), about a young girl whose body leans at an angle due to an unknown astronomical phenomenon. Rooted in a profound knowledge of all manner of creative arts, these intense stories are illustrated with meticulously and exquisitely drawn images - which were produced, it is said, at a pace of one week per page. Plans call for a total of four volumes to be published in Japanese through 2013 4).

Benoît Peeters and François Schuiten will visit Japan again in 2013. They will go to Tokyo on February 12 to receive the award and inaugurate an exhibition at the Roppongi Arts Center. The awards consists of a certificate from the Minister of Education, Culture, Sports, Science and Technology, a trophy and 600,000 Japanese Yen 5). 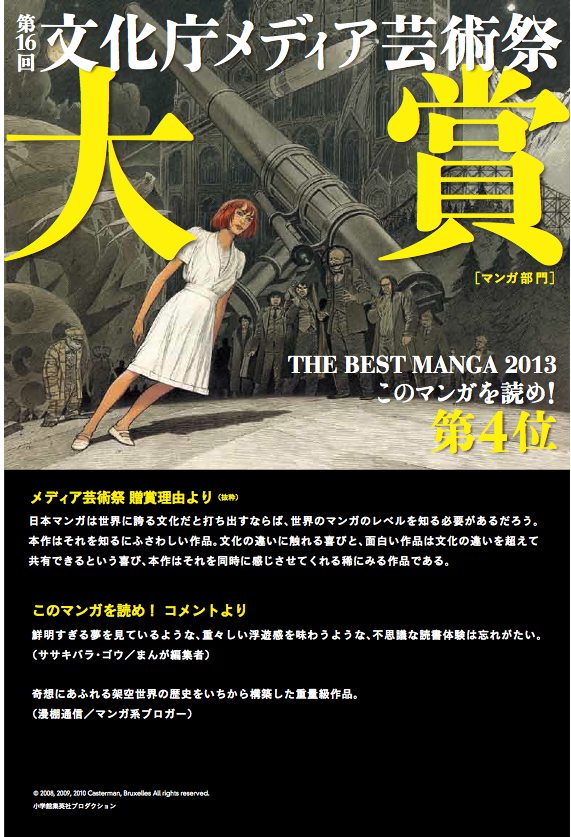