The “Manila 2019-2050: City of the Future” is a series of events organized throughout 2019 by the Embassy of France to the Philippines. It intends to bring together French and Filipino experiences and expertise in sustainable and livable urban development, and focuses on a vision of what Metro Manila can potentially become by 2050: a region of sustainability, a center of economic and technological progress, and more importantly, a home for its inhabitants 1). As part of this initiative, the “Manila 2019-2050: City of the Future Comics Contest” was launched in collaboration with Peeters and Komiket, which invited professional and amateur artists to submit original comics strips illustrating their vision of Manila around 30 years into the future 3).

A jury led by Benoît Peeters, the French Embassy, and Komiket selected a grand prize winner from the professional category who received an all-expenses paid trip to France to attend the Angoulême International Comics Festival, one of the world’s biggest and most prestigious events dedicated to comics. The works of 20 finalists from the professional and student categories were exhibited at the 6th floor gallery of the De La Salle-College of Saint Benilde’s School of Design and Arts on Nov. 26 2019 5).

In addition to awarding Filipino comics creators, Benoît Peeters inaugurated “From Obscure Cities to Futuristic Cities”, an exhibit based on the award-winning French comics series he co-created with François Schuiten. A portrayal of a post-futuristic era where the fabrics of society and time strata intertwine, the series “Les Cités Obscures” (“Obscure Cities”) won the Manga Grand Prize at the 16th Japan Media Arts Festival in 2012.

What would the city of Manila look like in the future? Some envision the sprawling city and its high-rise buildings to be half-submerged in water, due to flooding. Others imagine Manila to be a clean and sustainable city that upheld its heritage and preserved its unique culture. A few others believed that the fate of Manila was grim. The city in 2050 would face the same problems as it faced in the year 2019. Most of them were related to transportation in the country 6).

These ideas are just a few of what several Filipino comics creators and artists showcased on Tuesday evening, during the Manila 2019-2050: City of the Future Comics Contest at the CSB School of Design and Arts.

Benoît Peeters visited the School of Design & Arts of the De La Salle-College of Saint Benilde to award the winners of the Manila 2019-2050: City of the Future Comics Contest.

Isabella Hilario of De La Salle-College of Saint Benilde wins the student category of the Manila 2019-2050: City of the Future Comics Contest for her work entitled “For the Future”. Espinosa will be going on an all-expense paid trip to France to attend the prestigious Angoulême International Comics Fest. 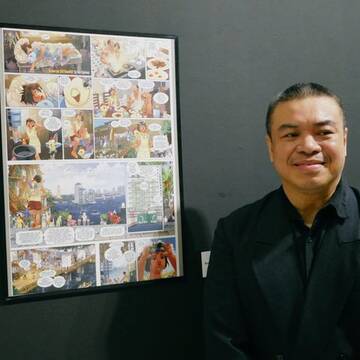 In an interview with GMA News Online, Espinosa shared that his inspiration for his winning entry was the sea level rise that would affect the city in the coming years.

“And having watched movies like Water World…I thought it would be interesting to see Manila underwater but….nature came back…as you can see, it's now sustainable [with] vertical farming in all the buildings. That's the inspiration,” the veteran comic book artist said 8). “It was a great pleasure to discover the city through the eyes of artists. Comics and cities fit real together. I think comics are very appropriate to this way of telling a story [of] how do people feel,” Peeters said 9).

According to him, choosing the winners was tough because they were high-quality works with unique perspectives and a personal element 10).

All the professional artists participating in the Manila 2019-2050: City of the Future Comics Contest together with Benoit Peeters, French Embassy Cultural Attaché Martin Macalintal, and The Filipino Komiks & Art Market co-founder Paolo Herras