Mons is the European Capital of Culture in 2015 1). In and around Mons many institutes have announced their plans during this year. In La Louviere (close to Mons) the Centre de la gravure et de l'image imprimée will hold an exposition about the life and work of François Schuiten: Lumières sur les Cités 2).

In Lumières sur les Cités, the visitors will be submerged into a universe of spooky images, appearing and disappearing again under shadow and light effects. These images will only be revealed if the visitors closely examine them; in this case, mysterious phenomena or unexplored passages will appear.

This exhibition combines original and multiple engravings (serigraphs, lithographs, posters) honoring the donation to the museum. On this occasion, François Schuiten will make new engravings related to disappeared or still existing emblematic places in La Louvière. As a kind of ‘past in the future’, this ‘trip’ refers to the history of our cities while making us look forward to the future. 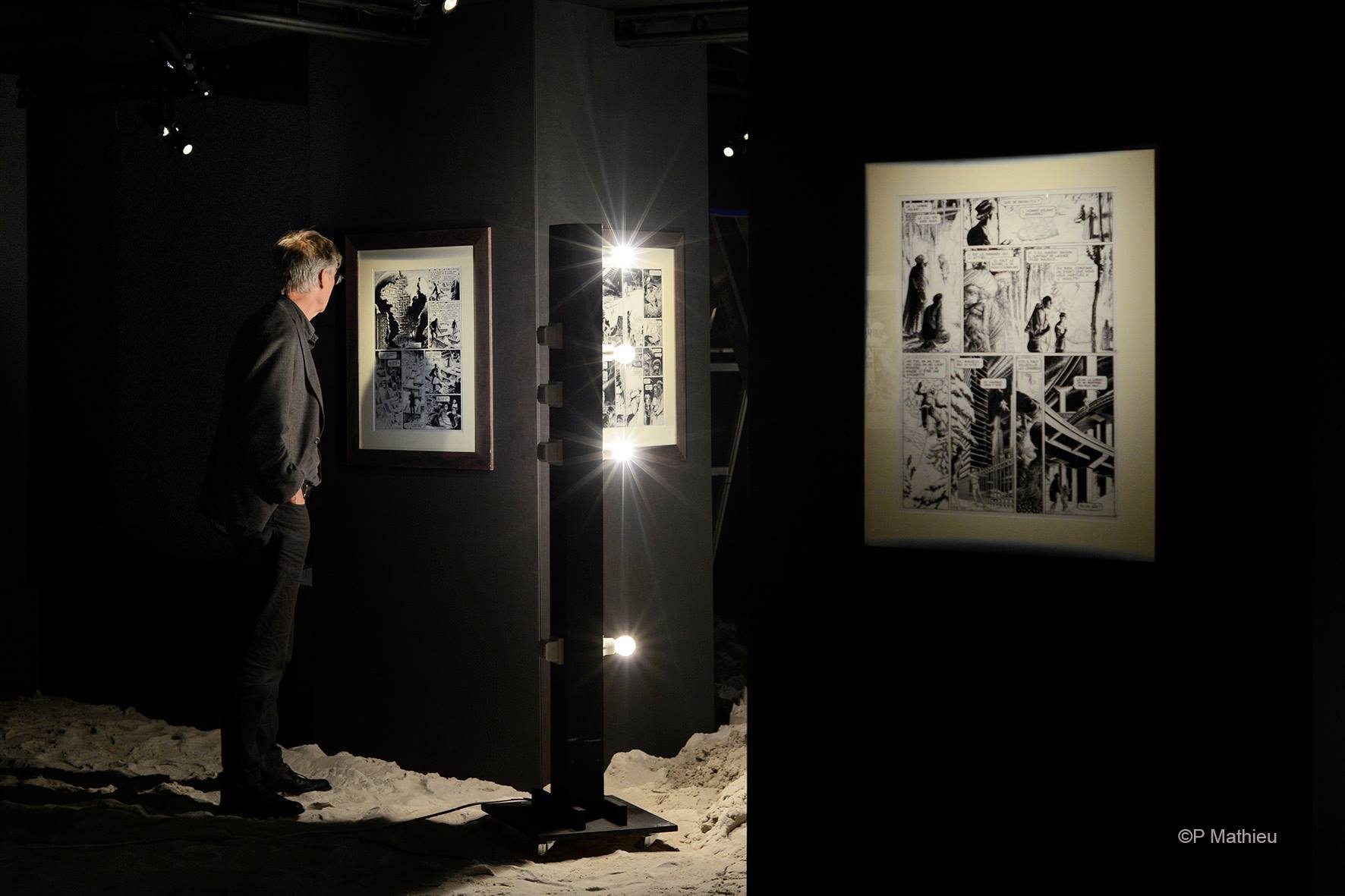 RadioX 3) had an interview with curator Marie Van Bosterhaut and Mons 2015 General Manager Yves Vasseur about the universe of Schuiten.

These printing presses are visible in the first part of the room. These were given to the museum by the late Laurent Debut (poet, editor and typesetter). There are two pedal presses (Minerva type) dating from the late 19th century. 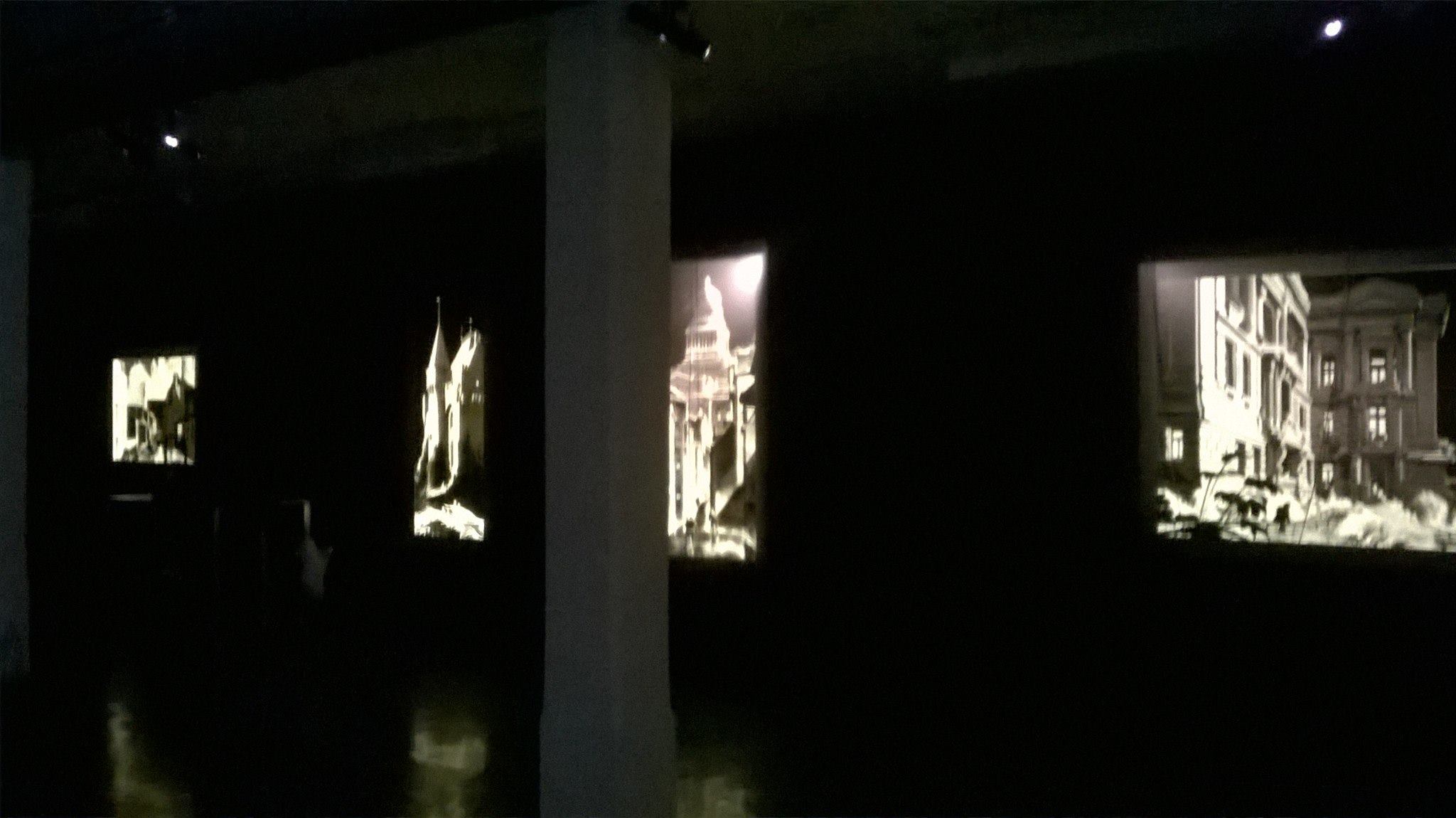 On the walls of the room, diving in the dark, large luminous frameworks are presented. They have a particular lighting system that show pictures printed on sheets of acrylic acid. The series is called 'fragments of Brussels', among which we recognize the palace of justice, the European district and the marolles, in an atmosphere that is without doubt Brüsel. This imaginary city, created by François Schuiten and Benoît Peeters works as a double of Brussels. It shows the past and forgotten architecture of the European capital and the danger of urbanization.

In his various stage designs, François Schuiten attaches great importance to light, but also to sound. A composition prepared by Bruno Letort is played into the central space. The sand floor echoes the invasive and disruptive sand of La Théorie du Grain de Sable. A sand sculpture recalls the fragile fate of St. Albert Tower.

Enguerrand David, sculptor of sand realized this work in this exhibition representing the tower St-Albert. 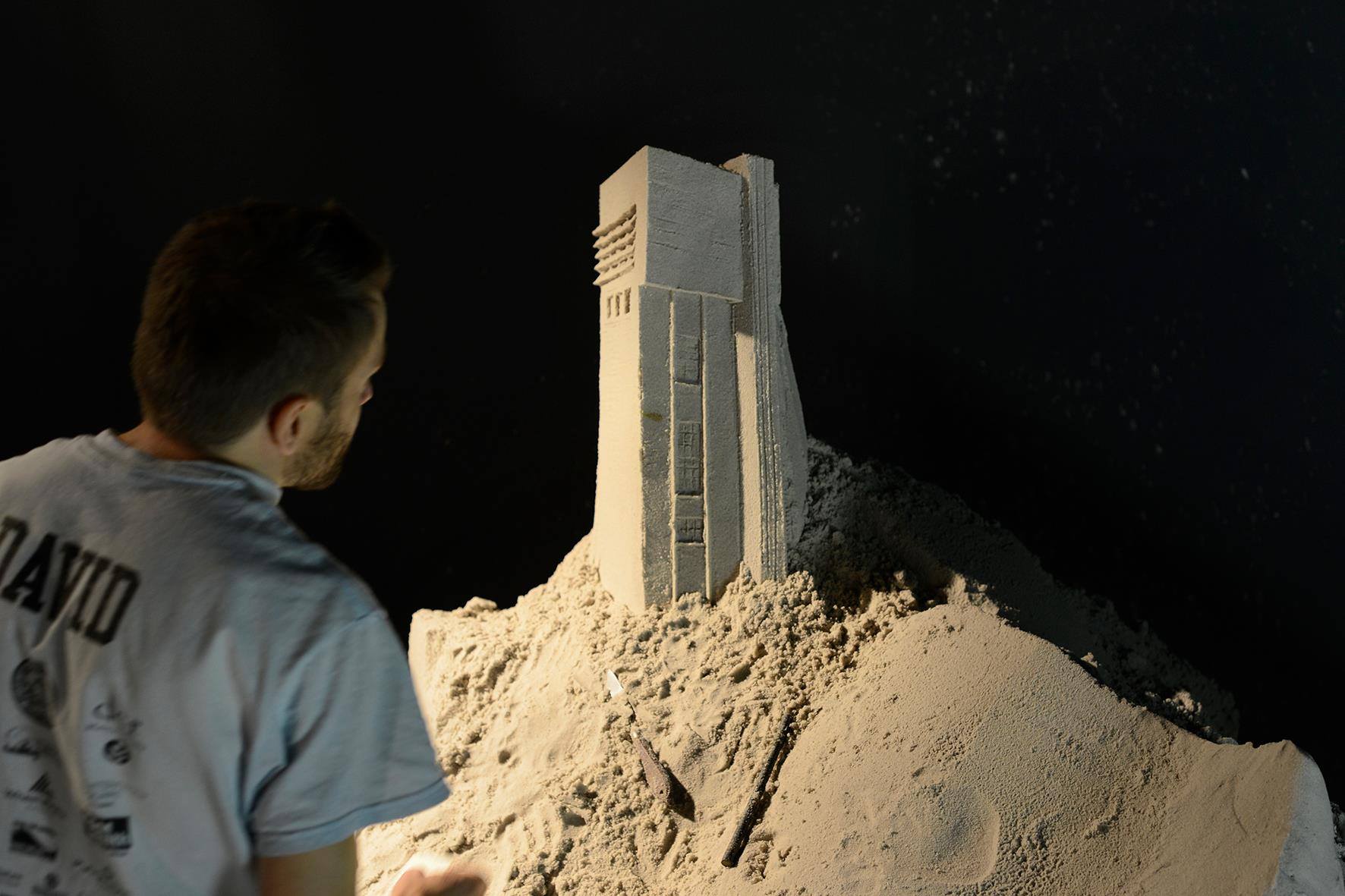 At the second level the artwork is shown that is given by François Schuiten to the museum. Four printing techniques: offset, litho, screen printing and digital printing.

Several printed images can been seen next to the original image. 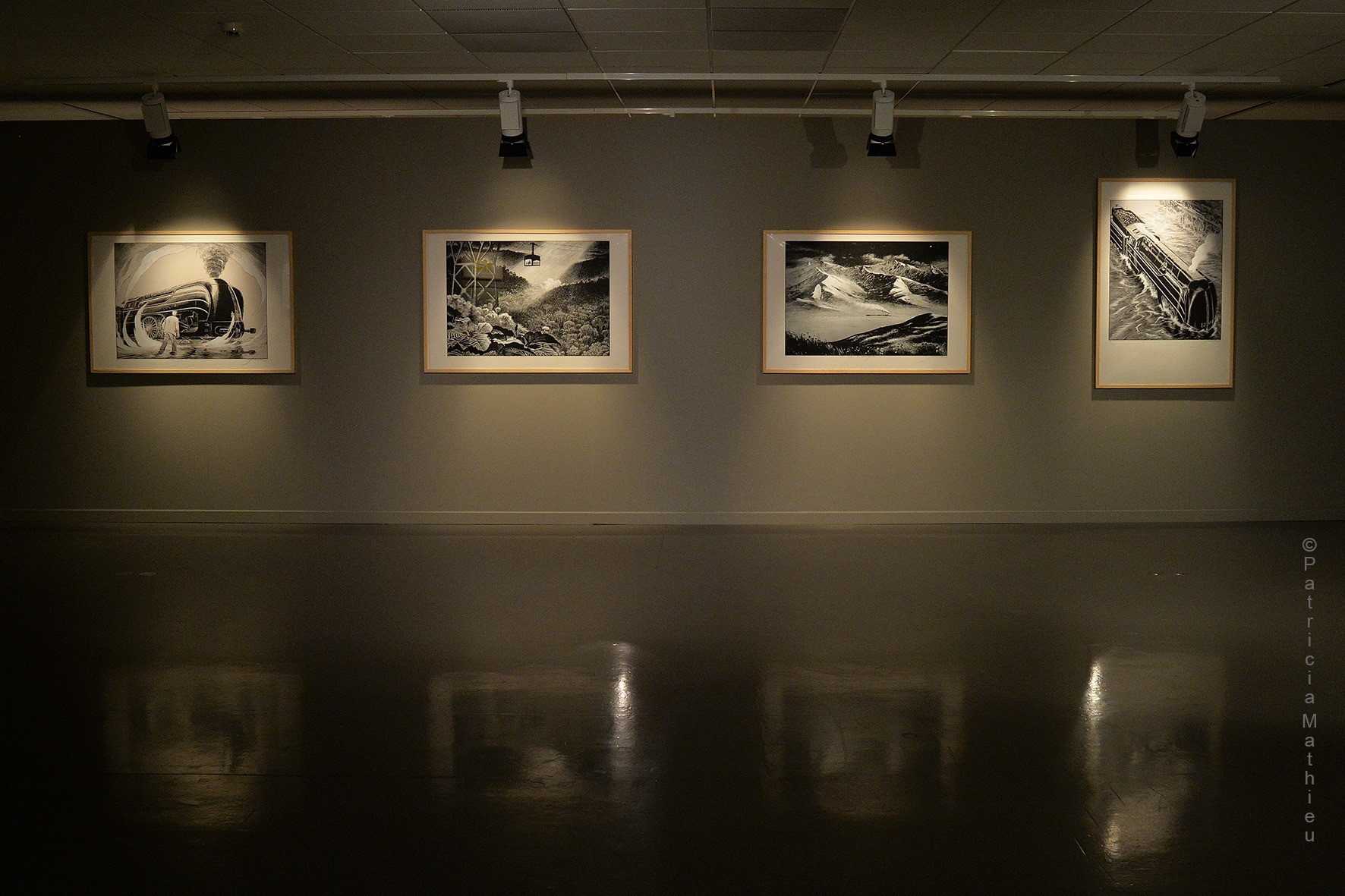 Some more images of the exhibition:

After the opening evening more images of the Lumières sur les Cités were published.

The following images were made by Maria Salamone 4).

The following images were made by Mattias Launois 5).

And finally some more images by Patricia Mathieu 6).

Light on the Cities

In a low light room the original pages of La Théorie du Grain de Sable are showing. The light on the pages was changing, showing details that were not visible before. See the two examples below. 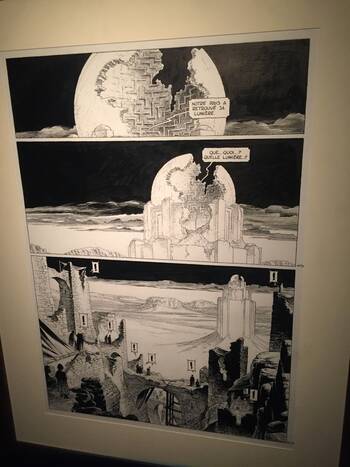 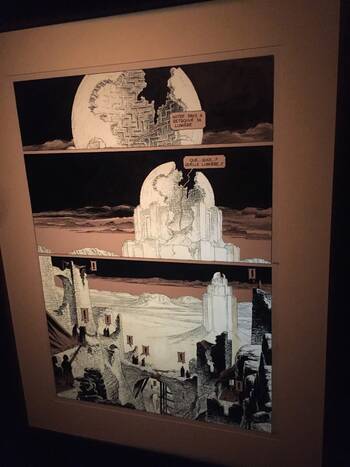 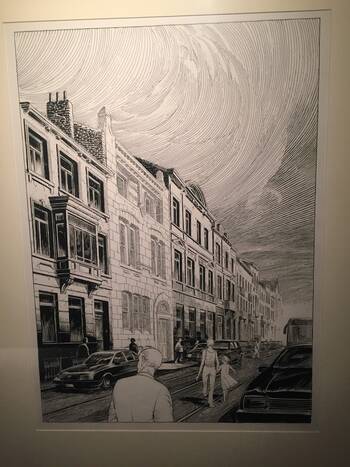 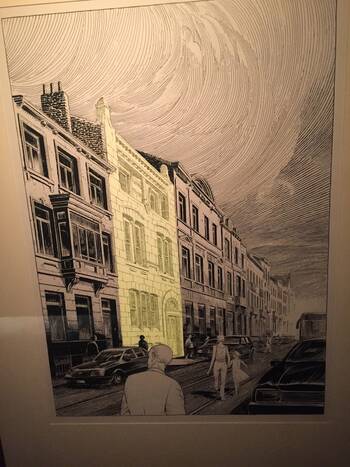 This movie captures what the change of light does to the image.

Together with the exhibition a serigraphy has been made of the announcement poster. It is printed on Munken 300 gr paper, signed and numbered. 200 copies are printed. It is for sale at Centre de la Gravure et de l'Image imprimée de la Communauté française during Lumières sur les Cités for 125 euros. 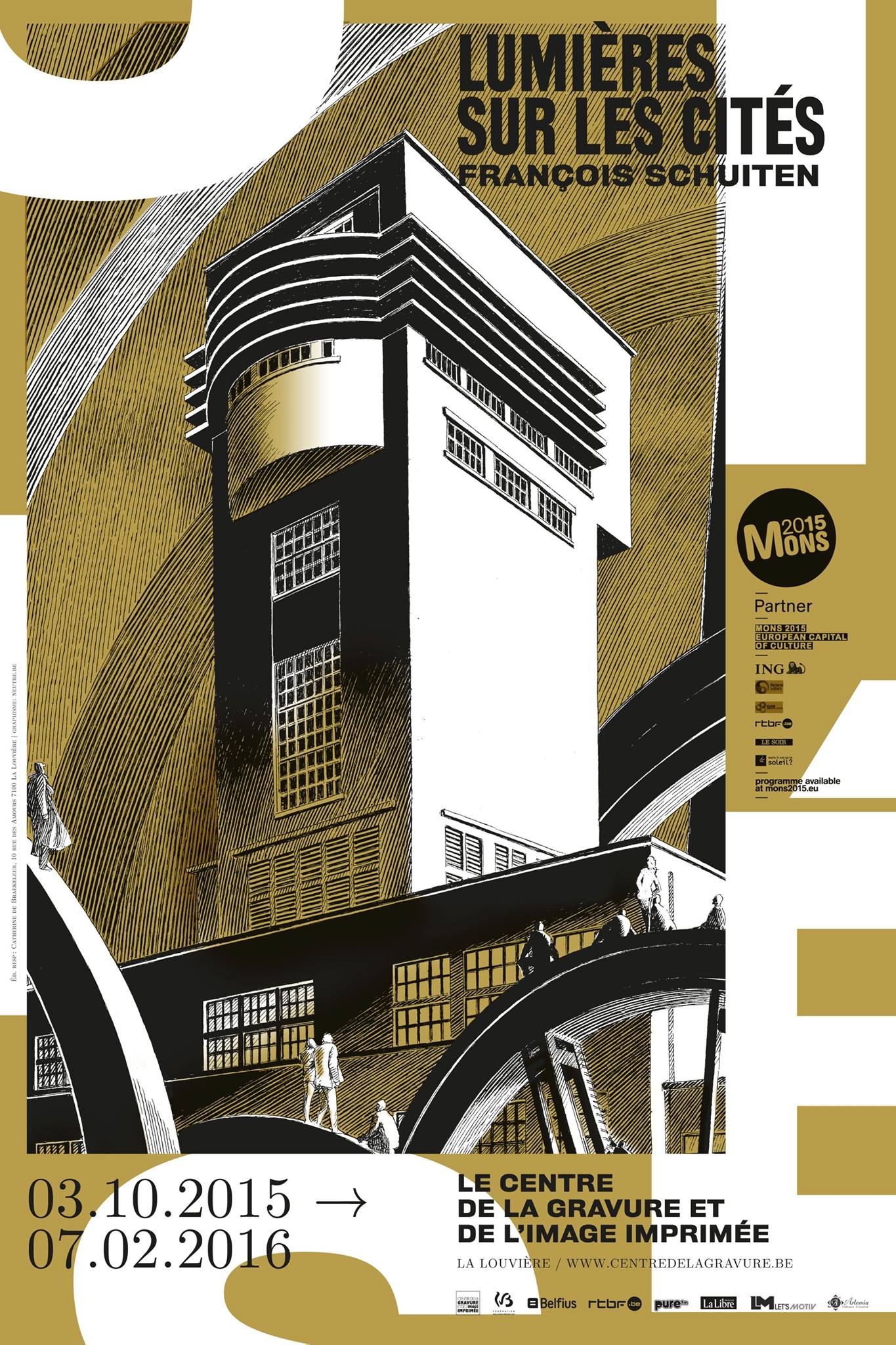 Patricia Mathieu 7) captured François Schuiten while he was signing the prints.

The exhibition was officially opened on Friday evening October 2nd, 2015.

Antenne Centre TV had an interview with François Schuiten.

Early September 2015 the preparations of the exhibition rooms started. 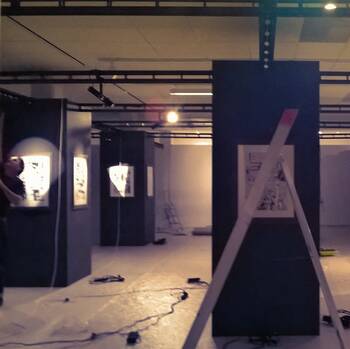 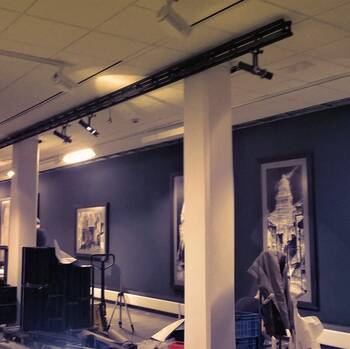 June 10, 2015 François Schuiten visited the tower st-Albert with Catherine De Braekeleer and Marie Van Bosterhaut in order to prepare for the expo.

At October 1st, 2015 Centre de la gravure et de l'image imprimée organized a meeting with the press to get a preview of the exhibition.

Events around the exhibition

Bus on tour
On Saturday November 14th, 2015 you can travel by bus from Mons to La Louvière and discover the Mundaneum museum and the exhibition at the Centre de la Gravure. The bus on tour will be organized by Mons 2015. The bus starts from Mons, Park and Ride. See www.mons2015.eu for more information. Price: € 8 for transportation and entrance fees for both exhibitions are included.

Meeting between François Schuiten and students of art schools
The meetings will be on Monday November 16, 2015. The first group at 10:00 hrs and the second group at 13:30hrs.

Conférence-fiction Rêves d'archives
On Monday November 16, 2015 at 19:30hrs. Location: Mundaneum in Mons. François Schuiten and Benoît Peeters and musician Bruno Letort will tell their stories. A partnership between the Mundaneum and le Centre de la Gravure.

Conférence L'Horloger du rêve
Author of the texts the book L'Horloger du rêve, Thierry Bellefroid will tell about François Schuiten. Thursday (date to be determined) January 2016 from 19h until 20h. Price: 5 euros with the possibility to visit the expo from 18h until 21h.

Around François Schuiten On Wednesday January 27, 2016 from 14h to 16h30. An engraving Workshop at the town library (place de Bracquegnies) for children from 6 to 12 years. Free, but reservations required.

The original drawings of the album La Théorie du Grain de Sable, published by Casterman, were carried out in collaboration with Benoît Peeters. 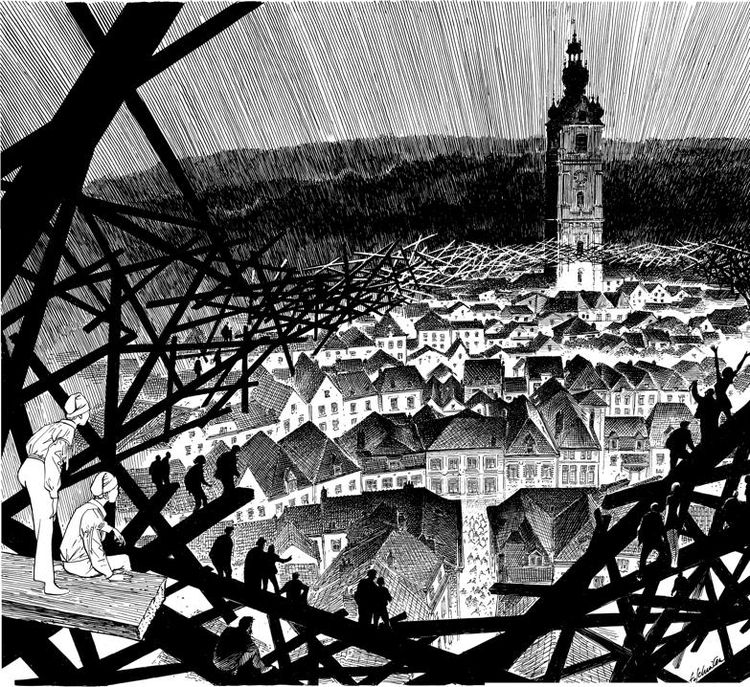 Some images of the last moments of the exhibition. On the last day of the exhibition, François Schuiten joined two meetings. A more “intimate” one in the morning with 20 participants, the other at 15 pm for a presentation of his universe and an exchange with many visitors. 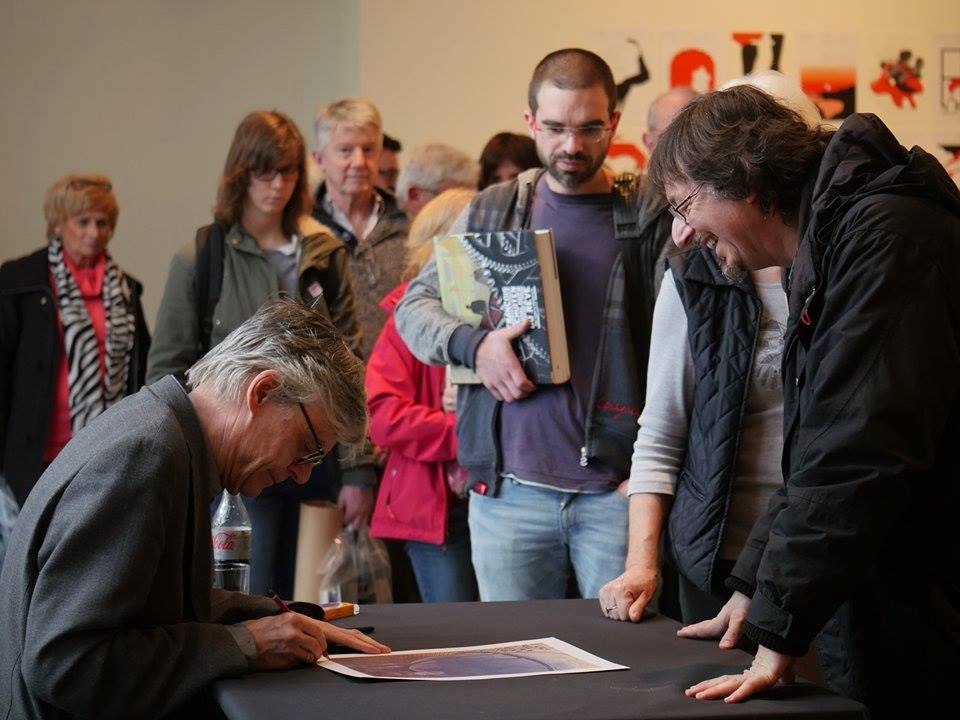 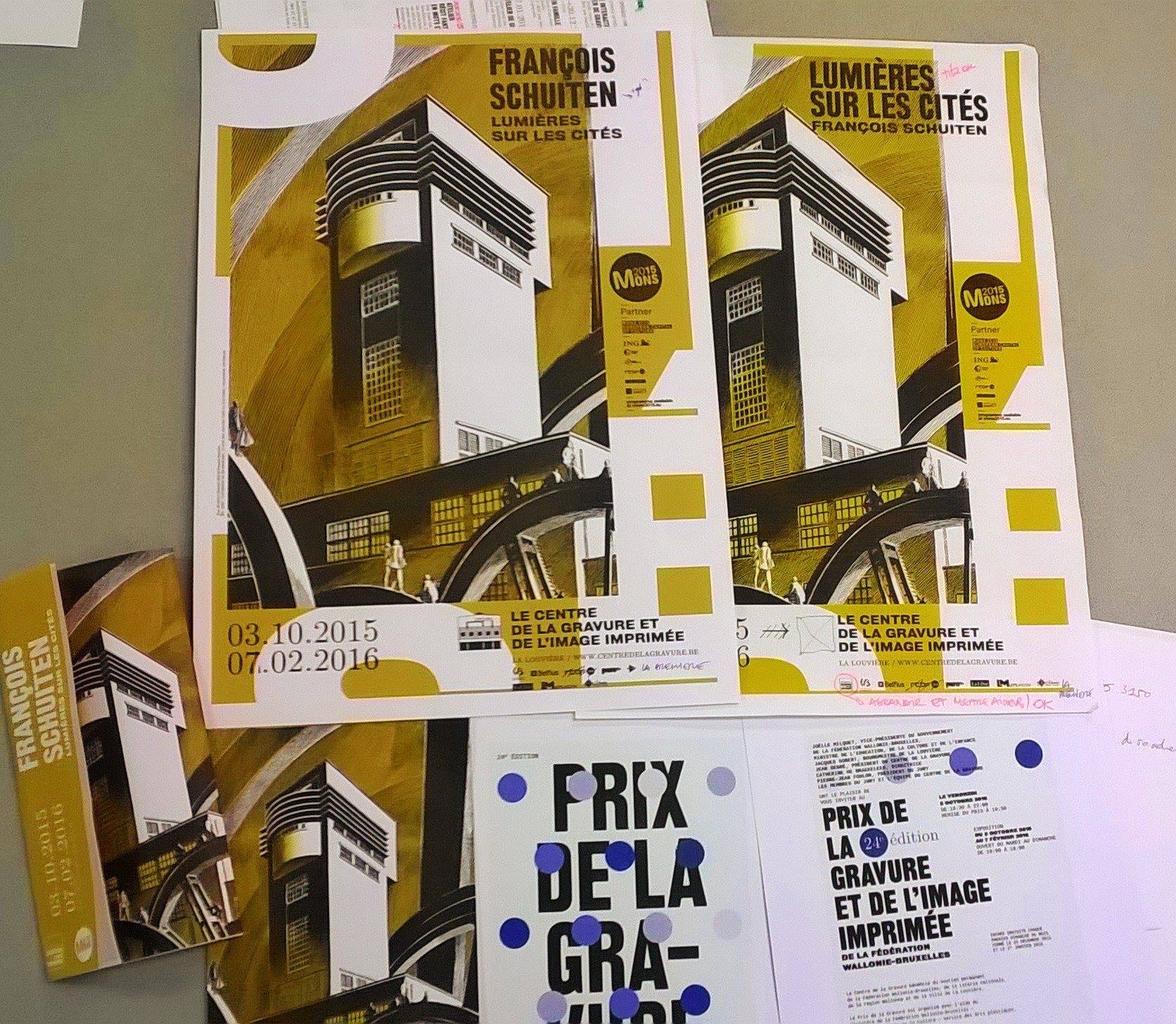