You are here » The Obscure Cities » Dictionary » Calvani 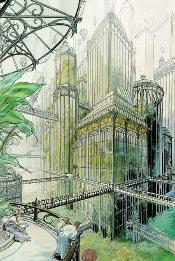 Calvani is one of the loveliest of the Obscure Cities. Originally conventional in its architecture, this city was mostly known for its dreary weather. One day, a number of magnificent greenhouses were built to accommodate a temporary botanical exhibit. Many plants grow here:

The townspeople were immediately seduced, and entirely rebuilt the city to match. The style may have also been influenced by the buildings surrounding the Great Hall of Zarbec, in Xhystos 1).

Serious damages were caused by a storm in 752 AT, but glass constructions do remain popular. The heavy air of the greenhouses can be unhealthy for those visitors who are not accustomed to it. Calvani is a vegetarian city, and no exception is tolerated. It produces great wines and subtle perfumes, and rare woods are used as currency 2).

Eugen Robick was not very fond of the city. But according to Bernard Despierres it is the most beautiful city 3).