You are here » The Obscure Cities » Dictionary » Töpffer, Rodolphe 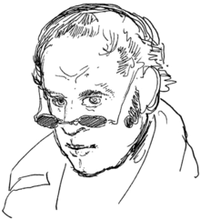 Rodolphe Töpffer was the son of painter Wolfgang Adam Töpffer, a German emigrant who had settled in Geneva, Switzerland. Unfortunately, due to an eye defect, Rodolphe was initially unable to pursue a career in the visual arts like his father. Instead, he devoted himself to literature, writing short texts such as 'My Uncle's Library', 'Nouvelles genevoises' and, especially, 'Voyages en zig-zag', accounts of his walking trips in Switzerland. Töpffer studied in Paris and became a teacher, working in several schools in Geneva, and becoming titular professor of rhetoric at the Geneva Academy of Belles-Lettres. In 1825, he founded a boarding school for boys.1)

Töpffer has earned most fame for his “histoires en images”, picture-stories which are considered the first in the comics genre. He created six titles, 'Histoire de M. Jabot' (1833), 'Monsieur Crépin' (1837), 'Les Amours de M. Vieuxbois' (1839), 'Monsieur Pencil' (1840), 'Le Docteur Festus' (1840), 'Histoire d'Albert' (1845) and 'Histoire de M. Cryptogame' (1845). After Töpffer's death in 1846, were posthumously anthologized in the series of volumes titled 'Histoires en Estampes'. A story left unfinished by Töpffer was 'Brutus Calicot', the manuscript of which is kept at the University Library in Geneva. Another publication by Töpffer is 'Essais d'autographie' (1842).2)

Töpffer's picture-stories have been an influence on many of the early “comic” artists, such as Christophe, Wilhelm Busch and Cham. His 'M. Vieuxbois', translated as 'Obadiah Oldbuck', was the first comic book ever published in America, in 1842. 3) 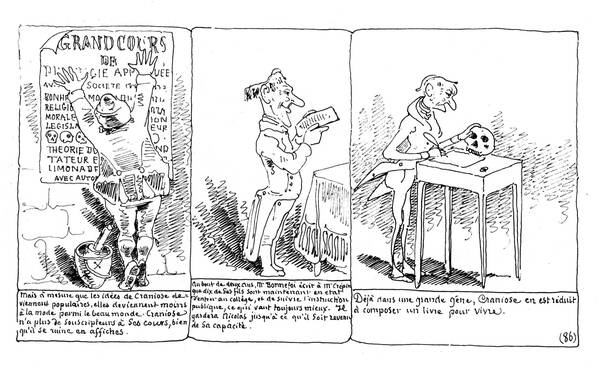 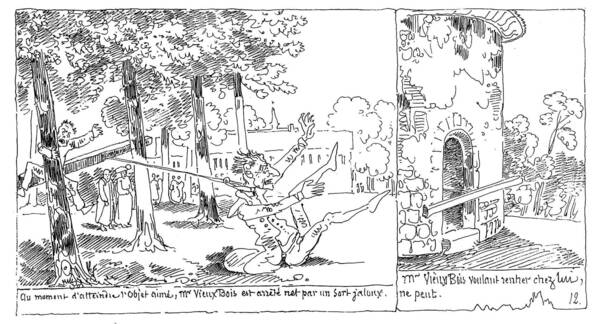