You are here » The Obscure Cities » Dictionary » Twilight Cities (the) 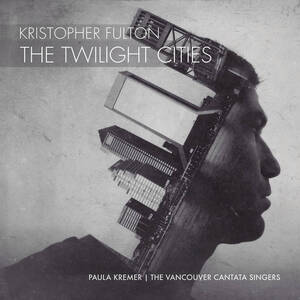 The Twilight Cities, commissioned by Michael Zaugg for Pro Coro in 2013, is a large work for 16 part a cappella choir. The genesis of this work came from Michael and Kristopher Fulton's love for comic books and the illustrated page.

Paired with the poetry of 19 century Symoblist, Georges Rodenbach, each movement is meant to convey the story of one of five graphic novels from Les Cités Obscures, a Belgian series of comics created in the 1980s by writer Benoît Peeters and artist François Schuiten 1).

Kristopher Fulton tells “When discussing the direction of my first commission with Michael Zaugg for Edmonton’s Pro Coro, the subject of comics and graphic novels (or sequential art for you hardcore academics) came about. Turns out, we are both huge fans of comics and the power they have over their readers.

“Well, surely, you must be familiar with the Belgian comic series, Les Cités Obscures, by Benoît Peeters and François Schuiten,” he stated.

I had never heard of the series. So I did some research and, with the help of some very in-the-know friends, I obtained copies of the first few books in the series.

I was hooked. The artwork by Schuiten (an artist from an entire family of architects with a passion for 19th century art deco and architecture in general) was some of the greatest I had seen since reading Katsuhiro Otomo’s Akira. The stories themselves were just as strange… and just as beautiful.”

“But what of the text? What could possibly hold up to such a high a concept with such elaborate imagery? Enter Georges Rodenbach, a 19th century Belgian Symbolist poet with a passion for architecture.”

The languid mist of autumn has dispersed…
It hovers between the towers, like the incense full of dreams
That will linger in the naves after the most solemn Mass;
And it sleeps like a linen spread out on the ramparts.

It unfolds and folds back on itself again, like a wing
with imperceivable movements and without end;
All becomes a blur and turns slightly toward divine,
And beneath this pallid brushing, all is lost.

All is grey, cloaked in the colour of fog:
The sky with its ancient pinions, the water and the poplars,
Old friends, reconciled, so easily, with the haze of the past autumn,
Like all things that will soon be nothing but the faintest memory.

The victorious mist, against the pale depth of air,
Has diluted even the accustomed towers,
Whose grey thoughts are now gone forever,
Like some vague dream, or a geometry of vapour.

Kristopher Fulton: “How can you not want to set that?! Destiny, it seemed, had done the hard part for me.

My work The Twilight Cities (loosely translated lated from the more literal French The Obscure Cities) was the result. Each movement based on a different graphic novel from the series with its own Rodenbach poem that most closely resembled the story. Michael and Pro Coro did an amazing job. They were so completely supportive of the work from its inception and I am enormously grateful to have worked with them.” 2)