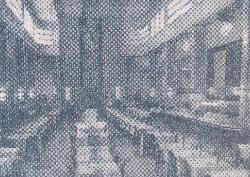 The Ninth [9th] is a restaurant located on the ninth floor of the Eaton Department Store, in Montreal. Designed by architect Jacques Carlu in 1931 AD, it closely matches the dining room of the liner Ile de France, which would indicate that it may be a Passage similar to the one on the Normandie. There may be, somewhere on an Obscure sea, a ship that awaits would-be travellers. Considered one of the finest examples of Art Deco in Quebec, the restaurant was declared a protected cultural site after the bankruptcy of the main store in 1999 AD.