You are here » The Obscure Cities » Dictionary » Derrida, Jacques 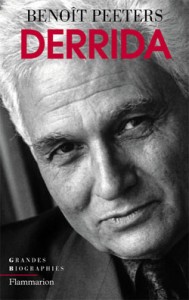 This biography of Jacques Derrida (1930-2004) tells the story of a Jewish boy from Algiers, excluded from school at the age of twelve, who went on to become the most widely translated French philosopher in the world - a vulnerable, tormented man who, throughout his life, continued to see himself as unwelcome in the French university system. We are plunged into the different worlds in which Derrida lived and worked: pre-independence Algeria, the microcosm of the École normale supérieure, the cluster of structuralist thinkers, and the turbulent events of 1968 and after. We meet the exceptional series of leading writers and philosophers with whom Derrida struck up a friendship: Louis Althusser, Emmanuel Levinas, Jean Genet and Hélène Cixous, among others. We also witness an equally long series of often brutal polemics fought over crucial issues with thinkers such as Michel Foucault, Jacques Lacan, John Searle and Jürgen Habermas, as well as several controversies that went far beyond academia, the most well-known of which concerned Heidegger and Paul de Man. We follow a series of courageous political commitments in support of Nelson Mandela, illegal immigrants, and gay marriage. And we watch as a concept - deconstruction - takes wing and exerts an extraordinary influence way beyond the philosophical world, on literary studies, architecture, law, theology, feminism, queer theory, and postcolonial studies.

In writing this compelling and authoritative biography, Benoît Peeters talked to over a hundred individuals who knew and worked with Derrida. He is also the first person to make use of the huge personal archive built up by Derrida throughout his life and of his voluminous correspondence. Peeters’ book gives us a new and deeper understanding of the man who will perhaps be seen as the major philosopher of the second half of the twentieth century.

Between 1974 and 1976, I was a pupil following the intensive and competitive post-baccalauréat humanities course at the Lycée Louis-le-Grand, where Derrida had been a boarder twenty-five years previously. It was during that time that I read, for the first time, L’Écriture et la différence and De la Grammatologie. In the next three years, as a philosophy student at the Sorbonne, then as a student of Roland Barthes at the École Pratique des Hautes Études, I occasionally attended Derrida’s seminar at the École Normale Supérieure.

I had published two short novels while I was a student and did not pursue my university studies beyond my Master’s. After becoming a writer and screenwriter, I came across Derrida again in another way, in 1983, when I collaborated with Marie-Françoise Plissart in creating an entirely wordless photographic story, Droit de regards (Right of Inspection). We approached Derrida with this work, asking him to write a preface for it. One year later, he finally came up with a long and superb “reading”. The album was published by Éditions de Minuit before being translated into German, English, Korean and Japanese, and together we launched it in Paris, Berlin and Vienna. 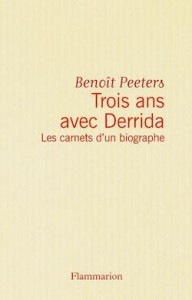 Our book-related exchanges carried on for several more years. I continued to read him. And we saw one another for the last time in the summer of 2000.

In 2007, three years after his death, it became clear to me that the biography of Jacques Derrida was a project that I had to undertake. My former ties with him largely privileged my relationship with his wife, Mme Marguerite Derrida, and with several others in his entourage. Since then, I have devoted most of my time to this project, with a steady passion. I have read or reread his immense bibliography, met some one hundred people who knew him, methodically explored archives kept in the “Special Collections” of the University of California, Irvine, and in the IMEC – Institut Mémoires de l’édition contemporaine – in Normandy. I am the first person to have had the fortune to explore the incredible sum of documents accumulated by Jacques Derrida over the course of his life: his schoolwork, personal notebooks, book manuscripts, previously unpublished lectures and seminars, unedited interviews, thousands of letters received, press articles… I have also managed to track down correspondence addressed by Derrida to some of his intimates, from different periods of his life, notably several extraordinary letters from his youth that shed light on his years of study“.

Livres Hebdo, a weekly trade magazine published by the French Club for the bookstore and book professionals published a review of Benoit Peeters’ biography of Derrida. peeters-lh036.pdf

Documentary about Derrida by Virginie Linhart and Benoît Peeters, broadcasted at Arte on October 8, 2015.