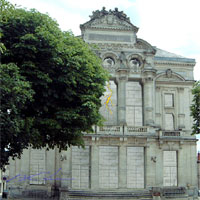 For this project, we will invest the theatre of the city of Angoulême. This theatre was recently rebuilt and, from the old building only the bluish gray stones on facades were preserved. In all its openings, the woodworks of doors and windows were replaced by open glass panels with aluminium mountings.

In order to gum these glass panels and to give it a strange and mysterious look, we decide to seal all openings with printed panels with images of the same stones found on the facade. We will thus transform it into a blue gray monolith, whose coldness is accentuated by a cold temperature lighting.

Alone, on the facade, an atrium window will be cut out in stones a fault from which will spout out a luminous ray of a cordial yellow, close to a blazing inferno light.

The visitor will enter by the theater main door and will approach the hall set, as a passage with false perspective, by tulles painted of stone walls, leading them to the entry of the Grande Salle called for the occasion Salle du Dôme.

On each side of this passage, known as the Labyrinlithe, we will play with light and transparency on several tulle layers. The first layer, set as a 19th century bonding, will reveal a medieval wall with degraded ashlars. This second layer will be erased in its turn to unfold a painted discovery of cloudy skies. Models painted like the stone walls, will stand out on these skies. Our “lithomania” will lead us to project a stone wall image on the back of the visitors right from their entry. Music of the composer Jean Baptiste Barrière will accompany the set.

Doors cut out in the tulles will lead to other scenographied spaces: the galleries, l'espace Galilée, the workshop of François Schuiten and Benoît Peeters.

The galleries will allow to play with real sights of the city of Angouleme opposed to the images of another poetic reality, the vision of François Schuiten's city.

The Salle du Dôme is decorated with an immense painted discovery, an interpretation of the interior of the Pantheon's dome in Rome by Alexandre Obolensky. The Benoit Peeters' movie, accompanied by the music of Bruno Letort is also projected In this room.

The Espace Galilée shed some light on the work of Claude Renard on this theme.