You are here » The Obscure Cities » Dictionary » Aurita, Aurélia 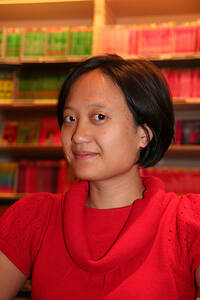 Aurélia Aurita, whose real name is Hakchenda Khun (name often shortened to Chenda) is born 10 April 1980 in Châtenay-Malabry in the Hauts-de-Seine. Aurélia Aurita is a writer of comicbooks. Her nickname is the scientific name of a species of jellyfish: Aurelia aurita 1).

She studied drawing at the École Arc-en-Ciel in Antony and published short stories in the monthly magazine Fluide glacial 2).

In 2018 she published Comme un chef. A story about the cooking experiences of Benoît Peeters, when he was a student 4).