Will François Schuiten stop with comics? 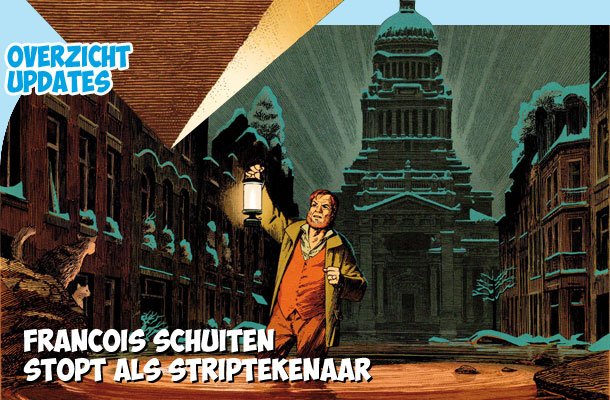 The website of Belgium comic stores Stripspeciaalzaak brought on December 8, 2018 a story telling that François Schuiten has made his last comic book. According to the site the Blake & Mortimer tribute album will be the last album drawn by Schuiten 1).

The story is loosely based on an interview by Hadja Lahbib with Schuiten in Tout le Baz'Art. In this interview François Schuiten is asked if he will start a new comic book project now he has finished the Blake & Mortimer album. To her surprise Schuiten quickly answers with a no. When asked if he stops, Schuiten answers that he doesn't know. After 3 years working on the Blake & Mortimer album he is ready for something else.

You can see this part of the interview in the following excerpt of the full interview.

We asked François Schuiten for a reaction. He told us: “When it comes to stopping comics, things are not so clear. I do not have a comic project at the moment and I do not intend to get back to it anytime soon. I have plenty of film projects, shows, books, etc. some with Benoît Peeters.”

The proces of making a comic book is a long proces that takes years. In an older interview Schuiten once explained that it takes him over a week per page to draw the final version. A project like his Blake & Mortimer album took three years to draw and also the Les Cités Obscures stories took multiple years to finish. Schuiten: “three years of hard work is not so easy to finance today …”

Gladly there are still projects with Benoît Peeters and drawing projects to look forward to 2). And maybe one day publisher Casterman needs a 5th volume of the integral editions of Les Cités Obscures. “The Obscure Cities may also continue to extend in other forms. Everything is possible if we remain surrounded by ambition and passion.”