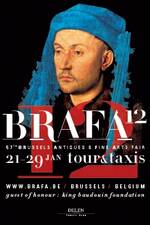 This year, the King Baudouin Foundation’s Heritage Fund is celebrating its 25th anniversary in style as the 2012 BRAFA’s the guest of honour. The Fund is commemorating this wonderful occasion by putting together a selection of masterpieces from its collection in a setting designed by François Schuiten. These pieces represent only a part of the collection, but they admirably reflect the quality and diversity that constitute its richness. The event will be a rare opportunity to admire such a brilliant sample of Belgium’s heritage.

Over the last 25 years, the King Baudouin Foundation’s Heritage Fund has endeavoured to save the most significant works of our heritage and has devoted a million euros a year to doing this. During these years, and thanks to numerous donations, the Fund has succeeded in building a collection of enormous value that today comprises some 7,000 works of art and 6 archival funds. From Jacob Jordaens to Philippe Wolfers, the collection is characterized by great diversity, as much from a chronological as a typological perspective. Each item is entrusted to a public institution (a museum, archive, centre for instance), which offers the very best context in which to make the item accessible to the public. The works are spread over some twenty public institutions across Belgium.

Celebrating 25 years at the service of Belgium’s heritage is thus an event that is dear to us. The Fund has therefore joined forces with François Schuiten, who has used his talent to highlight some 30 of the most remarkable works in the collection 1).

François Schuiten is also a stage designer. He contributed to the Utopia Pavilion at the 2002 World Fair in Hanover, visited by some 5 million people, and the Belgian Pavilion in Aichi in 2005. His design talents are appreciated as much in the cinema as in musical shows such as opera or dance. Closer to home, François Schuiten also designed the metro station of the Porte de Hall in Brussels and that of Arts et Métiers in Paris. The refurbishment of Horta’s Maison Aurique is also his work.   François Schuiten loves mixing different styles. He looks for the overall work: image, movement and music have to cohabit harmoniously. This is how he has chosen to present the works from the Heritage Fund’s collection at the Brafa, works that have left their museum context and now need induce a fresh look from the visitor. A dialogue has to be elicited between the visitor and each of the pieces exhibited. This presentation has been created in partnership with Expoduo, with whom François Schuiten had already collaborated for the setting of the 2005 Trans-Siberian Railway exhibition at Musées Royaux d’Art et d’Histoire. They are also currently working together to create the setting for the Train Museum in Schaerbeek.     Maintaining strong ties to his native city of Brussels, François Schuiten is also President of the Schaerbeek Heritage Fund, created within the King Baudouin Foundation.