You are here » The Obscure Cities » Dossiers » Julian Darius Dossier » More The Fever of Urbicande, Chapter 4

More The Fever of Urbicande, Chapter 4

by Julian Darius, published before on Sequart Research & Literacy Organization at Monday 18 June 2012

We’ve previously looked at The Fever of Urbicande‘s prologue (and some of its implications), as well as chapters one, two, three (in two parts), and most of four (in two parts). We now continue our look at chapter four.

If Eugen or Sophie have concerns for their safety in “the famous North Bank,” they don’t voice them. Such concerns don’t immediately seem well-founded either. We see a few people walking on the bank, but they seem to be dressed and to comport themselves about as formally as people of the South Bank.

Eugen doesn’t voice concerns for their safety, but he does wonder why Sophie would want to come there. “This bank was always less agreeable than ours,” he adds. “Look how dirty it is. Or the disorder of these constructions!”

His words smack of South-Bank elitism, but they also demonstrate the way in which he privileges cleanliness and architectural order. These are aesthetic elements, and they’re certainly class indicators. But they’re also superficial, because they speak largely to government, especially to its wealth or lack thereof. There’s no room in his analysis for culture, nor for whether the people are kind or hard-working. And as we’ve seen, while his South Bank is fascistic in its clean, monumental architecture and public spaces, those are also symbols of the South Bank’s totalitarianism. The same government that regulates these spaces controls its people’s movements with brutal efficiency. We may all like clean streets, but given the choice, we may well prefer a freer climate, dirty streets and all, over totalitarian fear.

Sophie doesn’t attack Eugen’s elitism directly. Instead, she says, “Eugen, enough. Explain to me why I was born in this city yet have never set foot here?”

She’s pointing out the irony of her own phrase, “the famous North Bank,” an irony of which she seems fully aware.

Robick doesn’t see this irony and instead parrots what we may assume is the dominant view in Urbicande. He says, “There’s nothing out of the ordinary about it. The two banks were separated by design. It’s essential. If we hadn’t done it, this entire part of Urbicande would have been deserted long ago.”

This is the fullest explanation of the division between north and south that we’ve gotten so far, and yet it still feels incomplete. The idea seems to be that, had the inhabitants of the undesirable part of the city been allowed to travel freely, they would have migrated away, causing that undesirable area to degenerate further. Here, Eugen seems to be naively applying his concern for aesthetic symmetry to a social issue, to which such concerns don’t apply. He imagines the North Bank “deserted,” its buildings empty and its population shifted to the south, thus encouraging the city to grow asymmetrically. But it’s obvious that the High Commission’s concerns aren’t for symmetry. The ruling elites seem far more concerned with enforcing their power, turning the industrial class of the North into something more closely resembling a caste. To put the matter into current American terms, the river allowed the city to turn the South into one large gated community, permanently protected from the ghetto to the North.

Sophie doesn’t seem to respond to Eugen’s points — at least not directly. Instead, she seems distracted by a stall that’s vending linens (probably garments) in expressive patterns, the likes of which we haven’t seen in the rather staid South Bank.

This might seem like a female cliche. Sophie, embodiment of the feminine and of sensuality, ignores Eugen’s intellectual conversation because she’s distracted by a shop selling clothes.

In fact, this is an excellent rebuttal to Eugen. It undermines his entire worldview, which privileges Southern values of aesthetic order and precision, utterly ignoring culture in the process. In sharp contrast, Sophie clearly delights in the different and the new. She doesn’t complain that the garment stand is dirty or lower-class. Instead, she descends upon it, leafing through the various patterns like new discoveries.

This doesn’t merely represent the cultural benefits the North has to offer. It also represents an aesthetic challenge to Eugen. The garments Sophie finds aren’t in keeping with the stark fascistic aesthetics of the South, but they’re passionate and expressive and individual. There are benefits, not only culturally but even aesthetically, to what Eugen and the South perceives as chaos.

She has made an argument with her deeds, instead of her words. It’s an argument that is, compared to his words, indirect. But both the garments and her joy in them represent a challenge, another way of living and being.

What’s more, Sophie’s smart enough — and schooled enough in the ways of privileged men — that she may realize what she’s doing. She doesn’t confront Eugen with words. Instead, she demonstrates a counter-argument in a way that appears effortless and whimsical — but which is all the more compelling for it. 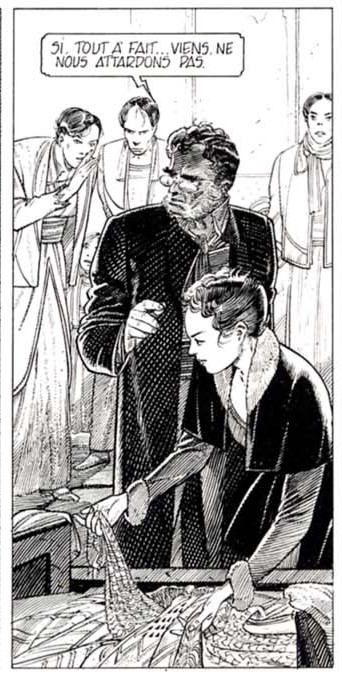 Eugen agrees with her that what she’s found is “lovely,” but he quickly adds, “Come. Let’s not linger.” Three residents of the North Bank have gathered behind them, and a couple of them are whispering to one another. They seem more curious than menacing. Still, Eugen’s concern implies that he perceives a potential threat, even if it’s just a danger of becoming mobbed as objects of curiosity. After all, Robick is a public figure, and he may well be recognized even in the North.

For the reader, it’s a strange panel. The reader may well have already perceived that being on the poorer North Bank, especially in the absence of police protection, carries with it a certain amount of risk — a risk that’s already been symbolically suggested by the passage over the river. Here, Robick seems to give voice to that risk for the first time. Yet the contents of the panel itself simultaneously suggest that this fear is unfounded. Robick might not like the attention, but we immediately perceive that these locals aren’t at all menacing.

In part, this is because these three locals, while they seem dressed a bit more colorfully than the residents of the South, still wear jackets. Informality is relative, and even the South may seem formal to our tastes. To our eyes, the North and the South have far more in common with one another than they do with us. But Robick’s eyes, like those habituated to any culture, may perceive things differently, seeing what are objectively minor cultural differences as wide, even unfathomable cultural gulfs.

It’s a perfect metaphor, embodied in a single panel, for the way this happens in all societies. Two groups that seem quite separate, whether defined by wealth or by race, seem quite similar when viewed from an entirely different cultural perspective. And this is especially apt for a graphic novel in French, on a continent full of countries and cultures and languages (in a way that, for example, North America isn’t). Yet plop a Frenchman and an American into Bombay, and their cultural differences may seem as minor as those of the North and South Bank of Urbicande may seem to us. Given this, it’s strange to think how strongly even a social unit as small as a city can divide itself, yet we see those divisions all the time — in the class implications of where someone lives, within a city, right down to the social implications of someone’s dress and demeanor.

We may also notices that Robick’s fear, in this moment, seems uncharacteristic for him. Earlier in this same chapter, he seemed uncompromising while in prison and facing his own potential execution. He’s shown little fear of the High Commission or the Southern elites, who did possess both the instruments of the state, such as soldiers, and the will to use them. But Eugen perceived those as his people, with whom he was comfortable. Now, having faced death at the hands of the elite without flinching, he seems to flinch at the very presence of the lower classes.

This only demonstrates how powerful and irrational his xenophobic reaction here truly is. He is not, in this, exceptional. But understanding this does undermine his position as the story’s supremely rational male — exactly as Sophie, through her (apparently whimsical) actions, has also done so. Behind Eugen’s austere intellectualism is an extreme class privilege that comes with a set of assumptions, even about danger. And while we may have perceived this before, this has never been so obvious as it is in this single panel.

Eugen and Sophie walk off, unmolested, and we’re treated to a tall panel, showing the North Bank on its own terms for the first time.

Outside of a statue in the foreground, which we may presume is part of the architecture of the riverbank, the North Bank certainly lacks the fascistic pomposity of the South Bank. Its buildings do seem more blocky and less sophisticated, a bit more like the urban projects with which we’re familiar, rather than the grandiosity of Hitler’s Germania. In the distance, we see smokestacks belching out pollution, an indication of the North as the city’s industrial center. The buildings of the North also seem more densely packed, a symptom perhaps of poverty, which helps put the lie to Eugen’s explanation that the division between the two banks is about symmetry of population. But they buildings of the North Bank are no less monumental in their size, no less pleasing to our eyes. In this, they are not unlike the more colorful dress of the North Bank: perhaps very different to Robick, but to our eyes more like the rest of Urbicande than some radical departure.

But the architecture of the North Bank also has its own, distinct set of merits. The streets, while narrower, curve, an indicator of their evolution over time, as opposed to the straight lines of centrally planned city spaces like Robick’s South. We also see towering stone archways, their rough-hewn material standing in contrast to the smooth precision of the South and suggesting their ancient origins. The North Bank may be chaotic, but that chaos is the product of history and has its own, idiosyncratic charms — which would have to be obliterated, were the city to follow through on Robick’s plan to redo the North the way he did the South.

“Take me to the top,” says Sophie. “I want to see everything here.” She’s as engaged with the South Bank as a whole as she was with its garments.

Eugen grumbles, but follows closely. Even though he’s one step behind, it’s clear who’s leading this expedition — one far out of Eugen’s comfort zone and challenging to his most basic beliefs, whether he knows it or not.