You are here » The Obscure Cities » Dossiers » Julian Darius Dossier » The Fever of Urbicande, Chapter 4 (Cont.)

The Fever of Urbicande, Chapter 4 (Cont.)

by Julian Darius, published before on Sequart Research & Literacy Organization at Monday 11 June 2012

We’ve previously looked at The Fever of Urbicande‘s prologue (and some of its implications), as well as chapters one, two, three (in two parts), and the beginning of four. Although it’s been a while, we now continue our look at chapter four.

The regime’s effective collapse naturally isn’t immediately apparent — naturally, no one announces it. The next page shifts subjects, beginning four days later (20 July), when Robick notes that the network has continued to grow and will “cover the entire city” in a few days. After this single panel, a new sequence begins that will consume the remainder of the chapter.

It occurs another three days later (23 July) and begins with Robick noting “The network’s growth has abruptly stopped.” It did so at 6am, and people now fill the streets, gaping at the unexpected development. From our perspective, because of the collapsing of time in the previous two pages, it seems that no sooner had the network demonstrated that it was unstoppable than it stopped.

Here again, we see Schuiten and Peeters’s concern for exploring the network’s implications. First, we see that the network’s rails are now each several times wider than a person. They rise, almost like thin skyscrapers themselves, dwarfing the people who touch the network to try to detect any movement. We soon see a single post running through Robick’s office, where the network was once a small cube on Robick’s desk. A page-wide panel at the top of a page echoes the chapter’s first panel: there, on 4 July, the space between the network’s posts was perhaps the width of Robick’s desk; now, on 23 July, each of the network’s posts is itself almost that same width.

Second, the clever idea of having people feel the network to detect movement is only the beginning of how the narrative begins to play with the implications of the network’s stoppage, much as it has played with the network’s growth. Already in the second panel of this new status quo, reaction on the street is mixed: one man declares that the stoppage is “the best thing that could happen,” presumably, because he likes the network. Another declares that the network has stopped in a position that “completely blocks my house.” Of course, any position in which the network stops will inevitably create winners and losers, but it’s a mark of brilliance that the story thinks of such implications.

Back in his office, Robick paces, pondering the cause of the stoppage. He writes that “the absolute regularity of the progression argued for inexorable growth.” He seems perplexed, if not actually a bit miffed. ”At the moment, I can see only one explanation: the fact that the city is almost entirely covered.” It’s an obvious mental connection, and while it’s circumstantial, it’s hard to believe the timing is a coincidence.

What’s perhaps most wonderful about this is that it manages to bring back the mystery of the network. Up until now, the mystery of the network’s origins has been largely forgotten, leaving first the question of whether it will continue to grow as Robick believes and then the question of its social implications. So far, he’s been entirely correct about the network’s growth and continued invulnerability. Now, for the first time since he discovered it was growing, the network has done something he hasn’t predicted.

Is it possible that the network has some sort of symbiotic relationship to the city itself? Certainly, we’ve seen how the network both reflects and distorts Urbicande’s architecture, as well as Robick’s architectural theories.

Answers aren’t forthcoming, however. Instead, Sophie knocks on Robick’s office door, asking him to come with her to the North Bank.

He seems staggered by the idea. And indeed, although we’ve often heard about the North Bank and seen both its riverbank and the smoke over its skyscrapers, we know very little about it. Robick’s reaction further confirms that, while he might be sympathetic to reconstructing the North Bank (which he advocates in the prologue), he not only allies himself with the South Bank but seems afraid of the North Bank. It’s as if the city’s powerful southerners see the North Bank as a ghetto one shouldn’t visit. The North Bank seems a place more talked about than actually visited. 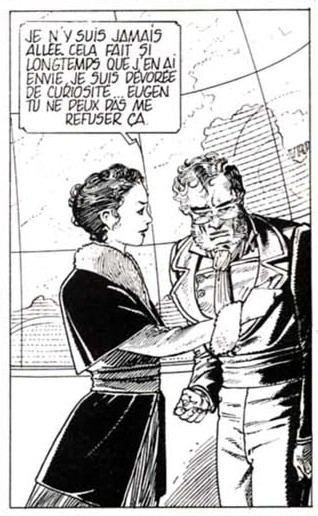 But to Sophie, that’s part of its allure. Always the one to initiate physical contact, she puts her hand on his lapel and explains, “I’ve never been there.” She says that she’s long been “filled with curiosity,” and she adds, as if sealing the deal, “Eugen, you can’t refuse me this.”

In the next panel, the couple is leaving already, and Robick’s continuing a discourse that he apparently began between panels: “Besides, the passage is extremely dangerous and…” The implication is that Robick’s words are merely fearful self-justification, which it’s not important for the reader to hear.

Sophie interrupts him, saying that the High Commission “has renounced” any attempt at enforcing customs. “Your Thomas,” she adds, “is the only one who still advocates shooting on sight.”

Her point is that Eugen’s wrong about the crossing being dangerous, but her dialogue reveals that Thomas, once Eugen’s friend, has become the most conservative of the city’s elite, holding onto the idea of control long past the point when all others have surrendered to inevitability.

With Thomas, the lack of control takes an overtly political form. Eugen has often seemed as controlled, whether through his repressed mannerisms or through his insistence upon the completion of his original plan for the city. But Eugen is an absent-minded professor, which allows him to accept the inevitable with a passive curiosity that can at times be stunning. Sophie represents, for him, a lack of control, a surrender to uncertainty and the chaos of sexual desire.

Of course, Sophie’s words aren’t exactly a promise of the safety Eugen worries about. Because while the government may have effectively surrendered, this carries with it the threat of the mob. The soldiers who had been ordered to shoot anyone attempting to cross from one bank into the next are the same men who are supposed to enforce civil order. In other words, there’s now no police to call.

Yet as we see Eugen and Sophie head towards the bank, there are no initial signs of unrest. A crowd has gathered on the riverbank, but there’s no sign of agitation or violence.

As the couple approach, they find a place where one of the network’s horizontal branches sits near the riverbank. Men have erected what looks like a temporary ramp-like construction, with which to climb onto the branch.

Eugen, always the cautious professor, exclaims while approaching that he’s “absolutely incapable” of making it up and onto the branch. The intellectual who fears physical activity is a familiar type, but it’s worth noting that such physical activity is tied to Sophie and to sex.

She dismisses his concerns completely: “Come, Eugen. There’s really nothing to panic about. I’ll give you a helping hand if it’s necessary.”

In the next panel, she’s doing exactly that. In a beautiful touch, her face is already looking ahead, down the branch towards the North Bank, while Eugen struggles up.

The pair then walk down the branch, Sophie in the lead. She seems to stride effortlessly, while Eugen seems on the alert and hesitating for fear of falling. We may well sympathize, because the branches of the network don’t have flat surfaces on which to walk. It wasn’t (as far as we know) designed for this function to which humans have adapted it — and this furthers the impression that it’s somehow natural, a phenomenon to which humans have accommodated, rather than the other way around.

Of course, these branches are connected at the corners of each cube formed within the network, meaning that Sophie and Eugen have to do their best to hold on while pivoting from one branch to the next. If anything, this seems like it should be the most hazardous portion of the voyage. Yet the two manage it, Sophie again going first, while Eugen manages but not without exclaiming. 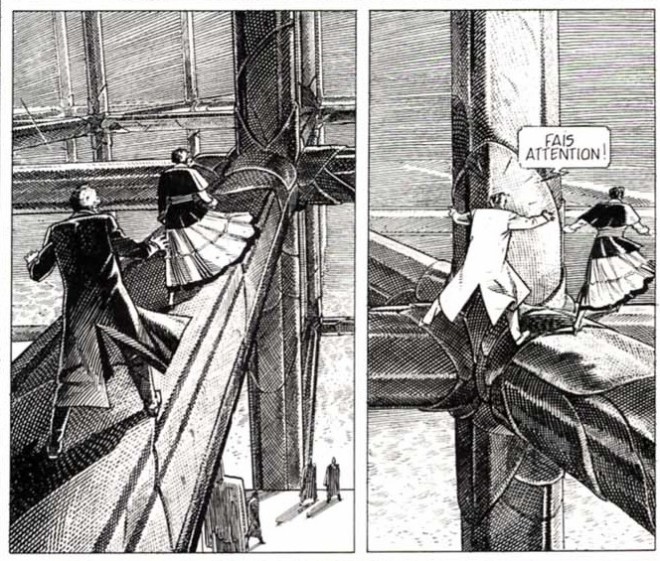 The two continue along until they reach the opposite bank, where a branch goes into a wall just over the riverbank, parallel to where they got onto the network.

There, Sophie takes a breather and sits where the branch ends, her dress draping out from her body and conforming to the branch’s rounded surface. “Voilà,” she says, “the famous North Bank.” Eugen, meanwhile, slouches behind her, stress lines emanating from his head, which he holds with his right hand. “I thought I’d never make it,” he says. 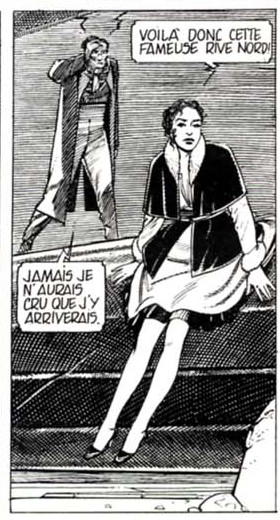 The way her dress seems to accommodate itself to the network is emblematic of the way she has taken to the network, as opposed to Eugen’s reluctance — or more precisely, his reluctance to engage the network physically, rather than as an abstract idea. If we see the network as growing and operating like a natural phenomenon, this underlines the way in which Sophie is the more natural or physical of the two (an interpretation reinforced by her occupation), whereas Eugen’s head is stuck in the intellectual clouds.

It’s funny that she refers to “the famous North Bank,” since the fame to which she’s referring seems more based on rumor than on experience. She’s never been there, after all, and we assume that she’s not alone in this. It’s not entirely clear whether Eugen’s been there or not. One would suspect that his authority would have permitted him access via the city’s two guarded bridges, but he hardly seem knowledgeable about the North Bank. Despite this, he’s planned its reconstruction and made decisions about its future.

There’s an obvious metaphor for class and for power here. The industrial ghettos of the North Bank are the sort of place everyone seems to have ideas about but no one’s really visited. Even the politicians and the architects, debating the ghetto’s future, have neither consulted its inhabitants nor bothered even to visit in any meaningful way. This isn’t limited to the conservative High Commission but also applies to Robick, who may be seen as a well-intentioned quasi-liberal, even if his concerns seem more aesthetic than social.