You are here » The Obscure Cities » Dictionary » Taniguchi, Jiro 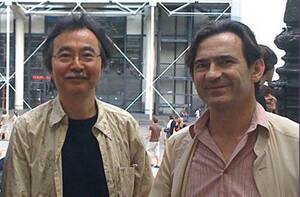 Jiro Taniguchi (14 August 1947 - 11 February 2017) was a Japanese Manga artist. Taniguchi began his career as an assistant of manga artist Kyota Ishikawa. He made his manga debut in 1970 with Kareta Heya (A Desiccated Summer), published in the magazine Young Comic.

From 1978 to 1986, he created several hard-boiled comics with the scenarist Natsuo Sekigawa, such as City Without Defense, The Wind of the West is White and Lindo 3. From 1987 to 1996, Taniguchi and Natsuo Sekigawa produced the 5-volume series Botchan no Jidai. In the 1990s, he came up with several albums, among which Aruku Hito (歩くひと?), Chichi no Koyomi (父の暦?), and Hitobito Shirīzu: Keyaki no Ki (人びとシリーズ「けやきのき」?).

He illustrated Baku Yumemakura’s works, Garouden from 1989-1990 and Kamigami no itadaki (The Summit of the Gods) from 2000 to 2003. The later received awards at the Angoulême International Comics Festival in 2002 and 2005.

In 1997, he created the Ikaru (Icarus) series with texts by Mœbius.

Jiro Taniguchi gained several prizes for his work. Among others, the Osamu Tezuka Culture Award (1998) for the series Botchan no Jidai, the Shogakukan prize with Inu o Kau, and in 2003, the Alph'Art of the best scenario at the Angoulême International Comics Festival (France) for A Distant Neighborhood. His work has been translated in many languages (See: Jiro_Taniguchi)).