You are here » The Obscure Cities » Dictionary » Grousset, Paschal 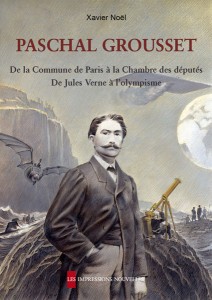 Paschal Grousset is the opponent of the Second Empire, and Foreign Minister of the Paris Commune in 1871, Paschal Grousset was imprisoned at Fort Boyard and deported to New Caledonia. In exile, he became the leading daily Le Temps the keen observer of life in England.

Translator of Anglo-Saxon novels, he made ​​known to Treasure Island for R.-L. Stevenson. Under the name of André Laurie, he started for the publisher Hetzel novels about the worlds of education, remarkable for their sensitive approach and documented. His adventure stories (some signed … Jules Verne) make it one of the fathers of science fiction.

Utopian, it offers a central laboratory of the fire ground at the Universal Exhibition of 1900. Promoter of the sport education for all in the name of Philippe Daryl, it precedes Pierre de Coubertin with the intention of reviving the Olympic Games.

Again there for fifteen years on the political scene, he brings his ideas in the great debates that cross the Third Republic and defends Dreyfus.

One hundred years after the demise of Paschal Grousset, his work-sided, far-reaching, deserves to be put in its proper place, through the course involved and often hampered by a man unjustly forgotten.