You are here » The Obscure Cities » Dictionary » Benayoun, Maurice (Pr) 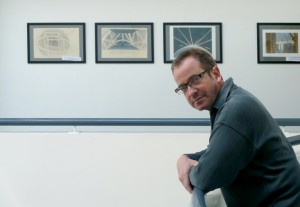 Maurice Benayoun (Mo Ben) is a media artist born in 1957. His work explores the potentiality of various media from video to virtual reality, Web and wireless art, public space large scale art installations and interactive exhibitions. Benayoun's work has been widely exhibited all over the world and received numerous international awards and prizes. Co-founder in 1987 of Z-A 1) (Paris) a pioneer CG and VR lab, Maurice Benayoun, between 1990 and 1993, writes with François Schuiten and directs The Quarx 2), the first HDTV CG series widely awarded and broadcast in m ore than 15 countries. In 1993, he is prize-winner of the Villa Medicis Hors Les Murs of the Foreign Ministry for his Art After Museum project, a contemporary art collection in virtual reality 3).

After 1993, he creates VR and interactive art installations. Among them, in 1995, the Tunnel under the Atlantic, televirtual project linking the Pompidou center, in Paris, and the Museum of contemporary art, in Montreal . In 1998, he was awarded by the Golden Nica, Prix Ars Electronica, Interactive Art category for World skin, a Photo Safari in the Land of War . Both works are considered by critics as major works in the field of interactive art 4).

Beside his art works, Maurice Benayoun has been involved in many large scale exhibitions, events and architecture projects. Just to mention some of them : the Navigation Room (1997) and the Membrane (2001) for the Cité des Sciences de la Villette, the Panoramic Tables for the Planet of Visions Pavilion for Hanover Expo 2000 and the Multimedia Tour for the Abbaye de Fontevraud 5).

Maurice Benayoun conceived and directed the exhibition Cosmopolis, Overwriting the City , a giant art and science immersive installation, presented in the frame of the French Year in China 6).

Since 1984, Maurice Benayoun has been teaching video and media art at the Université de Paris 1 (Panthéon-Sorbonne) and invited artist at the Ecole Nationale Supérieure des Beaux Arts of Paris. He is co-founder and artistic director of the CITU federation of labs (Création Interactive Transdisciplinaire Universitaire) 7).