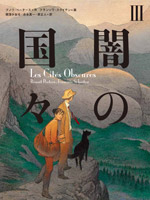 ShoPro has announced the third volume of Obscure Cities albums in Japan 1). On March 23, 2013 this third volume will be released. The volume will have 312 pages and holds the following albums:

It also includes a special interview with François Schuiten and Benoît Peeters.

This third volume comes after the great success of the first two volumes in Japan. With the first volume François Schuiten and Benoît Peeters won the Grand Prize of Manga at the Japan Art Festival 2013.

During their stay at the festival in February 2013 Schuiten choose the cover this third volume from several proposals.