Obscure Cities voted No. 1 in Japan 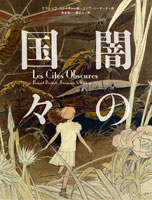 “Obscure Cities” written by Benoît Peeters and illustrated by François Schuiten was voted the No. 1 translated foreign comic book published in Japan in 2012 in a poll by Gaiman Award.

With “Gaiman” collectively referring to comics created outside Japan, such as U.S. works and “bande dessinee” comics produced for French and Belgian readers, the award is aimed at promoting the charms of foreign comics that remain low profile in Japan.

Sixty-six titles were in the running for the top spot this year, and 179 votes were cast from fans. The figure may seem modest compared to other manga polls in Japan. But it could multiply in years to come if the popularity of foreign comic books continues to grow.

“Obscure Cities” is set in mysterious city-states of a world slightly different from ours. The sci-fi comic series weaves tales of bizarre events and incidents. There have been 12 official and 12 spinoff stories in the series, with the Japanese edition only released in 2011.

“Superman: Red Son” came in second. Originally published in 2003 by DC Comics in the United States, it rests on the premise that Superman's spaceship had landed in a collective farm in the Soviet Union rather than the United States. Written by comic genius Mark Millar, the story explores a world where Superman has become the superhero for the communist nation.

Emmanuel Lepage's “Muchacho” ranked third in the popularity stakes. It follows the turbulent life of a young seminarian painter and focuses on art, love and revolution.

There is a common misconception that foreign comics are simpler than their Japanese counterparts. But the top three titles show how complex and profound some titles can be.

For more results, visit the Gaiman Award at (http://gaiman.jp/).

Translated by The Asahi Shimbun from the website of Anime Anime Japan Ltd 1).