You are here » The Obscure Cities » Dossiers » François Schuiten: Architect of the Fantastic

François Schuiten: Architect of the Fantastic

article by Paul Gravett, published before in Comic Heroes Magazine. 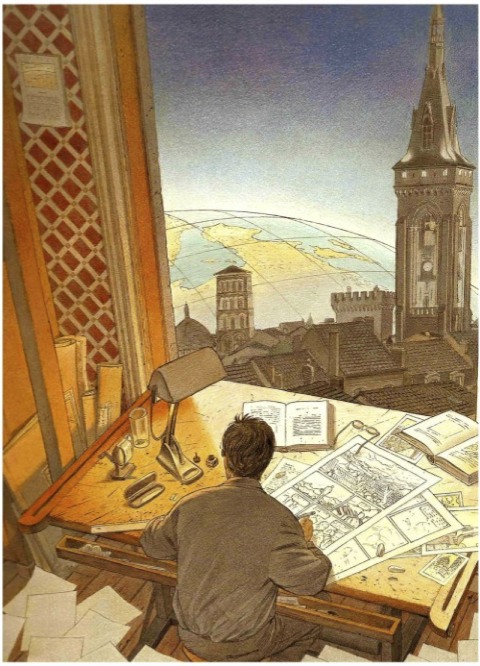 The Belgians have a nickname for the blight caused by bad urban planning: ‘Bruxellisation’. Take a stroll beyond Brussels’ preserved medieval marketplace and you’ll quickly understand why. In their eagerness to create a modernised capital fit for big business and Euro-bureaucrats, the city’s authorities permitted the wholesale demolition of many historic sites in the centre and replaced them with anonymous, soulless office complexes. How can planners and architects become so removed from reality, that they forget about the effects that their environments have on the human beings who have to live in them?

Born in Brussels in 1956, François Schuiten (pronounced ‘Frahn-SOOAH SKOY-ten’, although the French have ‘Frenchified’ his surname to ‘SHWEE-ten’) grew up with the effects of ‘Bruxellisation’ all around him, not least in his home environment. He comes from a family of architects and grew up surrounded by the latest concepts and techniques of the profession, so it was bound to rub off on him. Schuiten remembers his father, Robert Schuiten, as a savvy salesman as much as a sought-after architect. “Whenever he pitched to a client, he would illustrate the project, rendering the skies in colour washes and giving it atmosphere. The drawings hinted at stories, sometimes even a fantastical dimension. This was rare in architectural drawings and probably came from his training as a painter, as well as his desire to dazzle his potential clients.”

The son was expected to follow in his father’s footsteps and Schuiten trained as an architect, although he never wanted to become one. His obsession was comics. Belgium is the birthplace of Tintin, Lucky Luke, The Smurfs and many more all-ages favourites. This small bi-lingual country boasts the most ‘bande dessinée’ (or ‘BD’) creators per capita of any nation. As a student Schuiten also witnessed the post-1968 Francophone revolution of comics magazines and albums for adults. What better outlets could there be, in which to unleash his most ambitious architectural designs? Instead of leaving them as unbuilt impossibilities, he could channel his studies of architecture and its historical visionaries into comics and realise his retro-future dreams in ravishing, meticulous sequential art for everyone to explore. 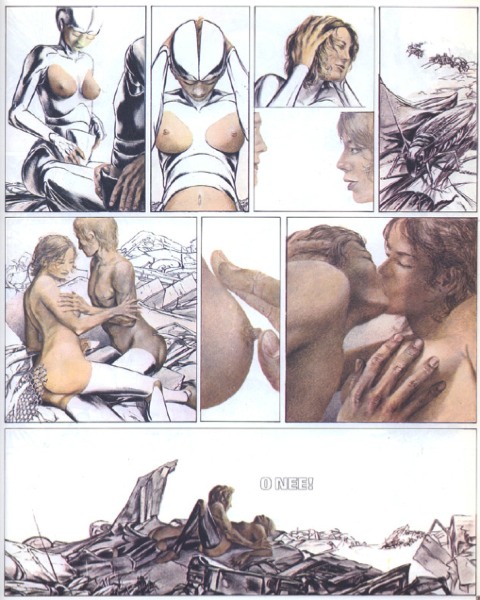 Precociously talented, Schuiten made his debut in print aged only 16, when his first story ‘Mutation’ was published in the Belgian edition of Pilote magazine. Barely 21, he made a bigger splash with his 8-page science fiction fable ‘Shells’, co-created with his brother Luc (above). This was snapped up by the French magazine Métal Hurlant in 1977 and swiftly translated in its American counterpart, Heavy Metal. By then, François had followed his passion and switched to studying another profession, comics, at the Institut Saint-Luc, taught by Claude Renard. Schuiten went on to collaborate with Renard on his earliest albums serialised in Métal.

By far his most fruitful, all-but-inseparable partnership began in 1982 in the literary comics monthly (À Suivre), which simply means ‘To be continued…’, with ‘writer-technician’ Benoît Peeters, a leading novelist, critic, Hergé expert and biographer, as well as a good friend since they met in school in 1968. Out of their shared enthusiasm and rapport would develop their ongoing joint masterwork, Les Cités obscures, initially known in English through the American editions from NBM Publishing as The Cities Of The Fantastic series.

For their ever-expanding parallel universe, Schuiten and Peeters set each story in a different, often isolated city, rigorously ‘terraforming’ a coherent continent on a steampunk-esque ‘counter-Earth’, rotating exactly opposite ours and so invisible from our Earth. Their metropolises come with their own beliefs, visions and anxieties which they use to allude to and comment on our own. They channel many cultural references, such as the fin de siècle futuristic imaginings of Jules Verne, who appears in person in the series, as well as the ingenuities of Jorge Luis Borges and the existential terrors of Franz Kafka. Schuiten’s draughtsmanship is exquisite, his meticulous linework reminiscent of Fine Art engravings, his colouring equally evocative.

Schuiten and Peeters construct each fresh urban space along distinct designs and utopian ideals but taken to thought-provoking extremes. Architecture becomes allegory. Their characters’ lives often become dominated, even overwhelmed, by the extraordinary ‘psychetectures’ they are forced to inhabit. Schuiten’s interest is in a “character caught up in a system. And how an environment constructs us, reveals us or destroys us. The organic links the city forges with us, fractal links which form between very small and very large things. Comics and architecture are perfect tools to address these ideas.” 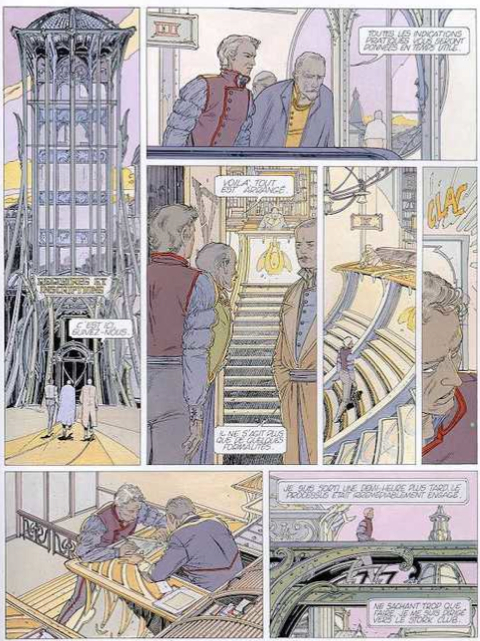 The Cities of the Fantastic opened with The Great Walls of Samaris compiled into a graphic novel in 1983 (above). Franz is a citizen of Xhystos, stifled by its Art Nouveau opulence, as lavish as Victor Horta’s architecture (notably the building which was saved from demolition and restored in 1989 as the Belgian Comic Strip Centre). The imagery also recalls Winsor McCay’s palaces in the astonishing colour comics pages of Little Nemo In Slumberland in American Sunday newspapers.

Franz accepts a mission to investigate the mysterious Samaris, where previous scouts have vanished. He finds the walled city and its inhabitants outwardly normal, but can’t explain the unease he feels. Finally, in a twist like The Wizard of Oz or Westworld, he breaks through a wall and discovers that all along he has been the only living person trapped within a vast mechanised stage set. He learns that Samaris, patterned on a carnivorous flower, is almost alive. To renew and expand itself, it needs to feed on an endless supply of images from people lured into her continuously moving labyrinth. Franz escapes and struggles home, only for his warnings to be ignored. In a still darker twist, Franz now sees Xhystos too as a sham, but is he finally seeing the truth or is he deluded with paranoia? 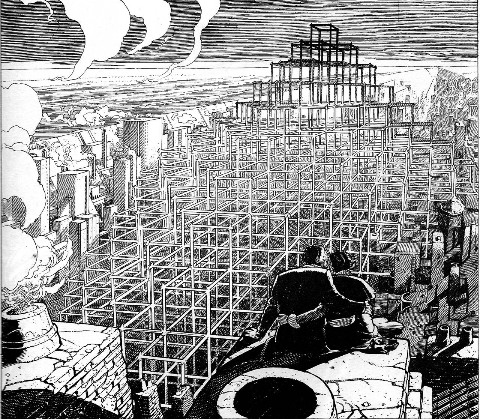 In Fever In Urbicand in 1990 (above), an architect becomes the hero. Eugen Robick is Urbicand’s self-important planner, who becomes frustrated that his ‘regularisation’ of the north bank of the city has been left unfinished. Here Schuiten refers to the fascist monumentalism of Hitler’s architect, Albert Speer. On Robick’s desk sits a metal lattice cube, recently unearthed, which bafflingly proceeds to replicate and expand exponentially, passing harmlessly through walls and flesh. It’s a humbling lesson for Robick when it grows big enough to bridge both banks and finally connect Urbicand’s divided halves. 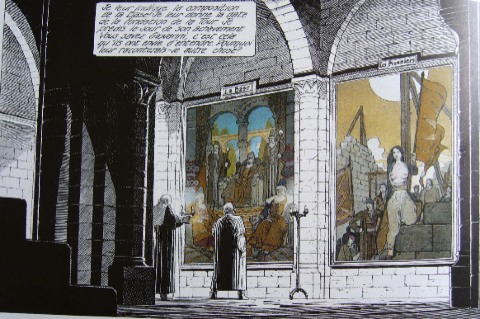 In a medieval setting, The Tower (above) in 1993 centres on Giovanni Battista, a lone caretaker of one section of a huge Babel-like structure. Cut off without any contact for ages, he ventures down to the ground and becomes embroiled in the power politics behind this lofty folly. In a graphic tour-de-force, Schuiten introduces full colour into this black-and-white tale through massive paintings of battle scenes, into which Battista is transported. 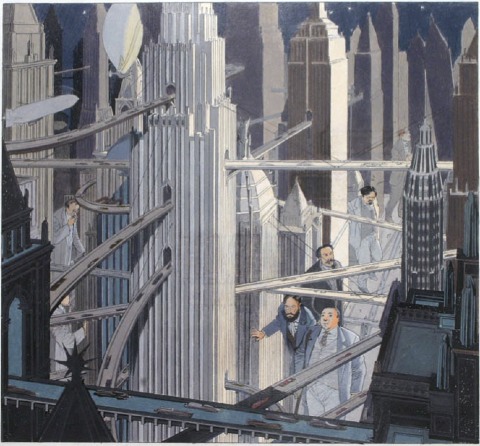 The next in the series translated by NBM was Brüsel (above) in 2002, a thinly disguised retro-version of their native Brussels, which also falls foul of callous redevelopment in the name of progress. Though their satire of ‘Bruxellisation’ is more pointedly topical here, it strikes universal chords. There’s broader humour too, especially in the hospital, supposedly a model of technology, but in fact alarmingly inefficient. 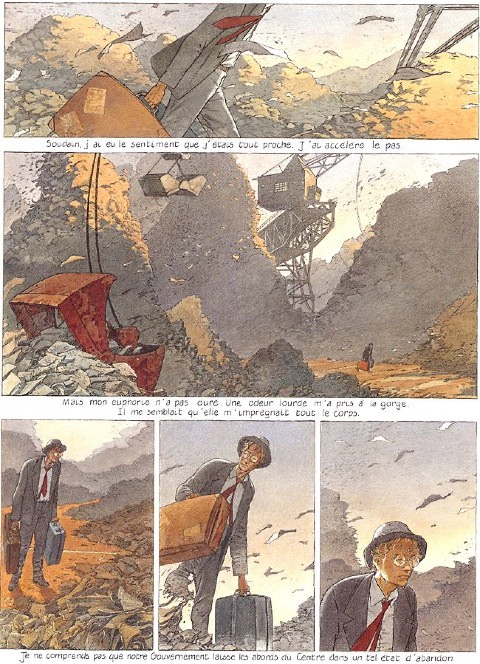 Schuiten and Peeters hit a new peak in 2003 in the two-part story The Invisible Frontier (above), their oblique comment on the break-up of Yugoslavia. While an apprentice cartographer is caught up in a ruler’s ambitions to re-draw his country’s territories, he falls for a mystery woman with a map drawn onto her body. Also in 2003, the duo were honoured as the Grand Prix stars of the 30th Angouleme Comics Festival in France. You can watch the process of the two of them collaborating on creating a page of comics in this revelatory video below.

In addition to their graphic novels, Schuiten and Peeters have branched out into numerous other multimedia projects, some involving additional collaborators, most more or less linked to The Cities of the Fantastic. In 1990, for the opening of the National Comics & Image Centre in Angoulême, they conceived an astonishing immersive decor for their retrospective, La Musée des ombres (‘The Museum of Shadows’). The visitor can step inside their cityscapes, whose huge walls have cracked open, splitting one of their fictional painter Auguste Desombres’ framed artworks in two. They also devised an audio CD of an invented play based on Desombres’ debut exhibition and for the sequel, a DVD mock-umentary movie about him. Since 1996, as well as experimenting with new digital formats, the pair have invited readers to extend their storylines further by participating in an official informative website, Urbicande.be.

Schuiten is an artist in full flow, whose oeuvre knows no limits, expanding off the printed page in all directions: from designs for films like Raoul Servais’s animated Taxandria and the live-action movies Toto le Héros and the erotic Gwendoline to the striking metal decor of the Arts & Metiers metro station platforms in Paris. In 2012, Schuiten went solo to produce La Douce, his graphic novel tribute to the celebrated locomotive and the designers and engineers behind it. A constant innovator, Schuiten worked with Dassault Systèmes, developers of augmented reality software which enables readers to activate motion graphics of the train on the printed pages through the webcam in their computer, changing its speed as it roars through the landscape. “I dreamed of bring this great locomotive to life. I wanted the reader to share this fascination with technology. And Dassault worked from the pictures in the album to create an augmented reality experience, enablingt the reader to discover this adventure’s hidden secret. It’s an extraordinary encounter between the pinnacle of early 20th-century art and the technology of the 21st century.” Take a look at this video of the press launch to sample the book’s astounding effects.

Such is Schuiten’s prestige that he has been commissioned to work on real-life architectural projects. In 2000, his Pavilion of Utopias in the World’s Fair in Hanover was visited by 5 million people. He has also designed metro stations in Paris and Brussels, where he is developing a railway museum. He and Peeters also lobbied for La maison Autrique, one of the few surviving Art Nouveau buildings in Brussles by Victor Horta, to be spared and conserved. The beautiful townhouse became the location for their exhibition about its history and the subject of their graphic novel The Grain of Sand Theory.

The great news is that starting in July this year, Alaxis Press in America is preparing to release further previously untranslated albums into English, under the original overall title The Obscure Cities. Publisher Stephen Smith is personally translating the first two releases, The Leaning Girl and the children’s book, Leaning Mary. The video below by Bruno Letort draws on this character. These two initial titles are to be followed by The Shadow of a Man in fall 2013 and The Grain of Sand Theory in spring 2014.

What is real and what is imaginary become delightfully blurred as their elegant, fascinating, sensual visions continue to grow organically and take on a life of their own. Wonders await you from Schuiten and Peeters as they tempt you back and forth across those ‘Invisible Frontiers’.