You are here » The Obscure Cities » Dictionary » Mont Analogue (Le) 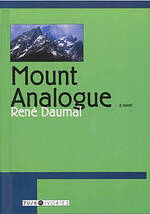 Le Mont Analogue is an unfinished novel by René Daumal, published in 1952 AD.

It describes a mountain of our world, so high that its summit reaches another plane of existence. This peak is somewhere in the South Pacific; but it is invisible, its enormous mass being enough to curve the surrounding structure of space. Electrical devices are useless there and, just as in Samaris, it seems that photography is impossible.

Analogical fauna and flora are noticeably different than that of the outside world. It is possible to reach or leave the island only at sunrise or sunset, for perpendicular sun light alone can briefly dispel the diffraction ring.

The Mount is surrounded by small towns founded over a period of millennia by the crews of those who have attempted the climb; the descendants of the French teams are mostly concentrated in Port-des-Singes.