You are here » The Obscure Cities » Dictionary » King, Frank 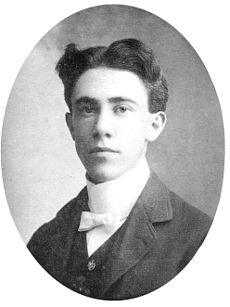 Frank Oscar King (April 9, 1883 – June 24, 1969) was an American cartoonist best known for his comic strip Gasoline Alley. In addition to innovations with color and page design, King introduced real-time continuity in comic strips by showing his characters aging over generations 1).

Born in Cashton, Wisconsin, King was the oldest of the two sons of mechanic John J. King and his wife Caroline. When Frank was four years old, he moved with his parents to 1710 Superior Avenue in Tomah, Wisconsin, where they operated their family general store. He started drawing while growing up in Tomah, where he graduated from Tomah High School in 1901. 2)

He entered country fair drawing competitions; a sign he drew for a hotel bootblack earned him only 25 cents, but it was seen by a traveling salesman who learned it had been drawn by the son of one of his customers. The salesman arranged an interview for King with a Minneapolis newspaper editor. King began earning $7 a week at the Minneapolis Times, and during his four years there, he doubled his salary while creating drawings and doing retouching. 3)

Gasoline Alley is a comic strip created by Frank King and currently distributed by Tribune Media Services. First published November 24, 1918, it is the second-longest-running comic strip in the US (after The Katzenjammer Kids) and has received critical accolades for its influential innovations. In addition to inventive color and page design concepts, King introduced real-time continuity to comic strips by showing his characters as they grew to maturity and aged over generations 4).

The strip is still published in newspapers in the 21st century 5).