You are here » The Obscure Cities » Albums & books » Calypso 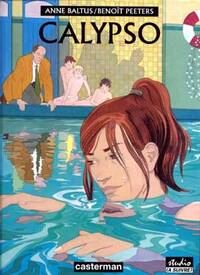 Calypso is the second album by Anne Baltus. The scenario is written by Benoît Peeters. The 60 page album was published in April 1995 by Casterman.

Brussels 1962. A discussion arose around the safety of local swimming pools,which has led to the closure of some baths by the government. Despite these preventive measures a few people mysteriously disappear while swimming in indoor pools. The director of the Calypso pool is therefore desperate.

He is looking for support in a young woman, who is working as a restorer on the bath mosaic, depicting the goddess Calypso and Odysseus. If the woman gets accidentally into the water and nearly drowns, it seems like she is rescued by one of the disappeared persons. She gets confused by her feelings for the man she saw when she drowned. The ultimate reaction is self-destruction and the destruction of her amorous director.

This story of impossible loves and people who can not reach each other is told in a poetic manner and in short texts. The drawing style is realistic. While the color is refined to respond to the tragic developments.