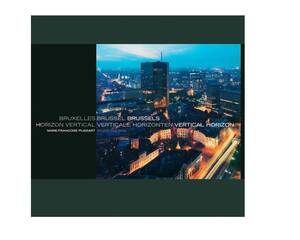 Bruxelles Horizon Vertical is a book by Marie-Françoise Plissart, with the help of Benoît Peeters. The book was published on 8 January 2008 by Prisme Editions. The 57 page book (31 x 1 x 29 cm) is multilingual. Later a new version was published with 104 pages and an extra DVD.

Peeters says: “I thought I knew Brussels. But when you take a look from a higher perspective, the photograph reveals a new, intriguing space. In all the chaos, it draws lines, highlights shapes and unveils unexpected structures.”

The book also includes a DVD. Philippe Simon says about the DVD:

“Nobody constructed the city so that it could be seen from above. What can we say about men while being up there ? The city contains everything, everyone. We can capture it indefinitely on a pellicule : it contains the very big and the very small things. The city, seen from the roofs, is also a treaty for involuntary art. ”

“This movie succeeds in the difficult task of marrying the instantaneity of the look and its perennity, the briefness of the photographer's action and the story that the cinema will tell. » By getting a little higher to film Brussels from the top of the roofs and the towers, Marie-Françoise Plissart « films from above, she takes distance and sees everything from afar. And this action of remoting ourselves make ourselves yet closer to a globality, and makes us focus on a general picture which, suddenly, seems to bring us closer to the very components of the urban space. » (…) « Urbanity reveals itself in what is more true and more terrible about itself.”

Some pages of the book.