Alain Robbe-Grillet: L’Aventure du Nouveau Roman is a biography by Benoit Peeters, published in 2022 by Flammarion. 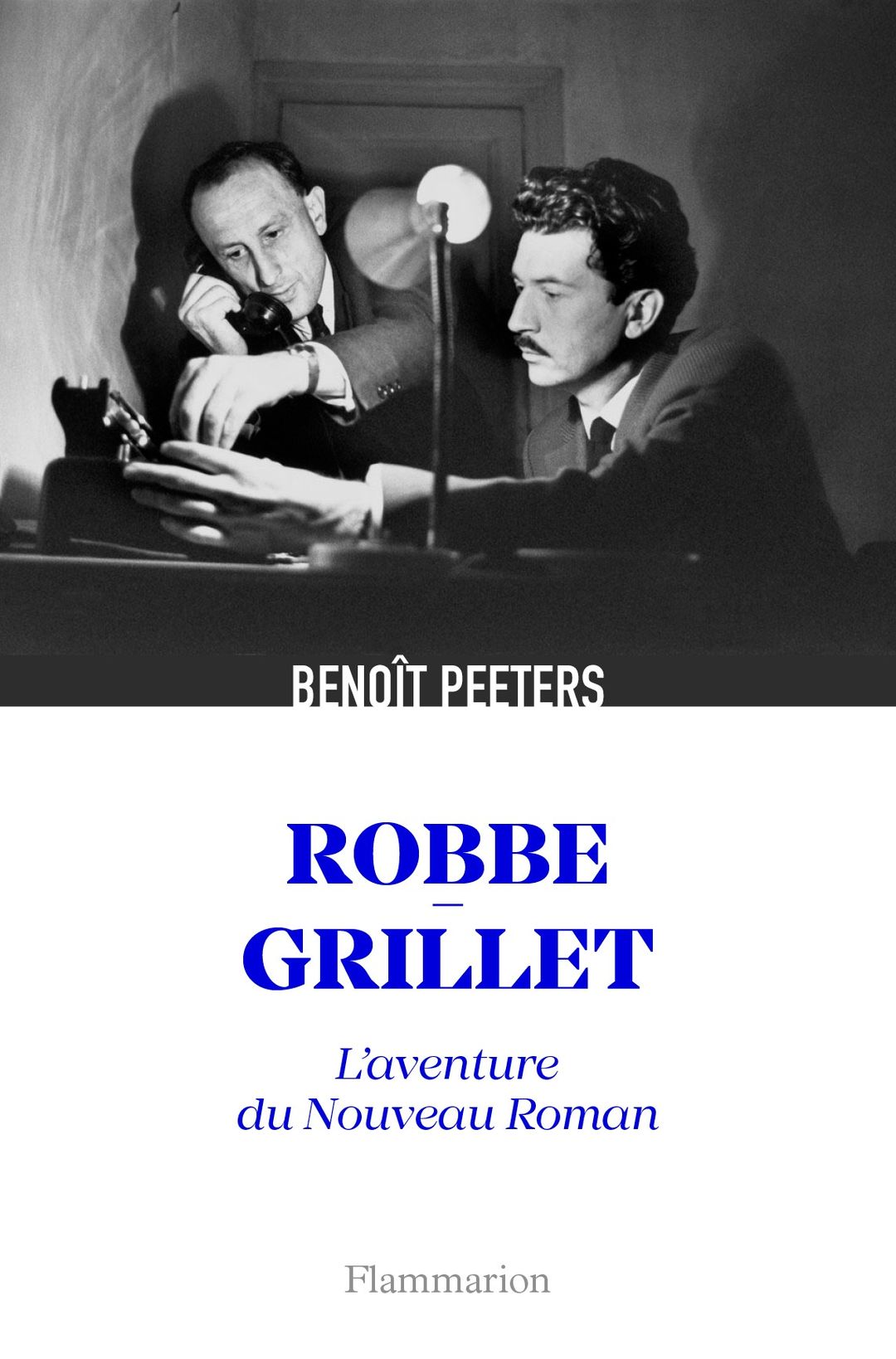 Benoit Peeters writes about this book: “He disturbed, fascinated, exasperated. He provoked more hateful articles than any of his contemporaries. But he also knew how to turn the most hostile critics around and to cultivate the interest of the most brilliant commentators, starting with Barthes, Blanchot and Foucault.

Yet, surprisingly, Alain Robbe-Grillet's work is less read today and, while the year 2022 marks the centenary of his birth, no biographical work on him has yet been published. I wanted to revive his figure and, with it, the adventure of the New Novel, based on the numerous archives that the writer left behind. Surrounded by a reputation for austerity, the New Novel was born at a time, both near and far, when literary debates raised strong passions. It is an exceptional meeting of talents, a story of friendships and disagreements, of flashes of brilliance and shadowy areas. I will evoke “Robbe's” long alliance with Jérôme Lindon, his friendship with Jean Paulhan, his changing relationships with Nathalie Sarraute, Claude Simon or Roland Barthes, as well as the unusual couple he formed with Catherine Robbe-Grillet.

I will also try to bring to life the tormented child, the STO worker, the agricultural engineer, the phrase-cutter, the secret sentimentalist, the daring publisher, the brilliant teacher and the tireless traveller that Alain Robbe-Grillet was. I will focus on this strange man, separated from the others by his singular obsessions. A character infinitely more complex than the media provocateur of recent years. A major author whom I think it is essential to rediscover.” 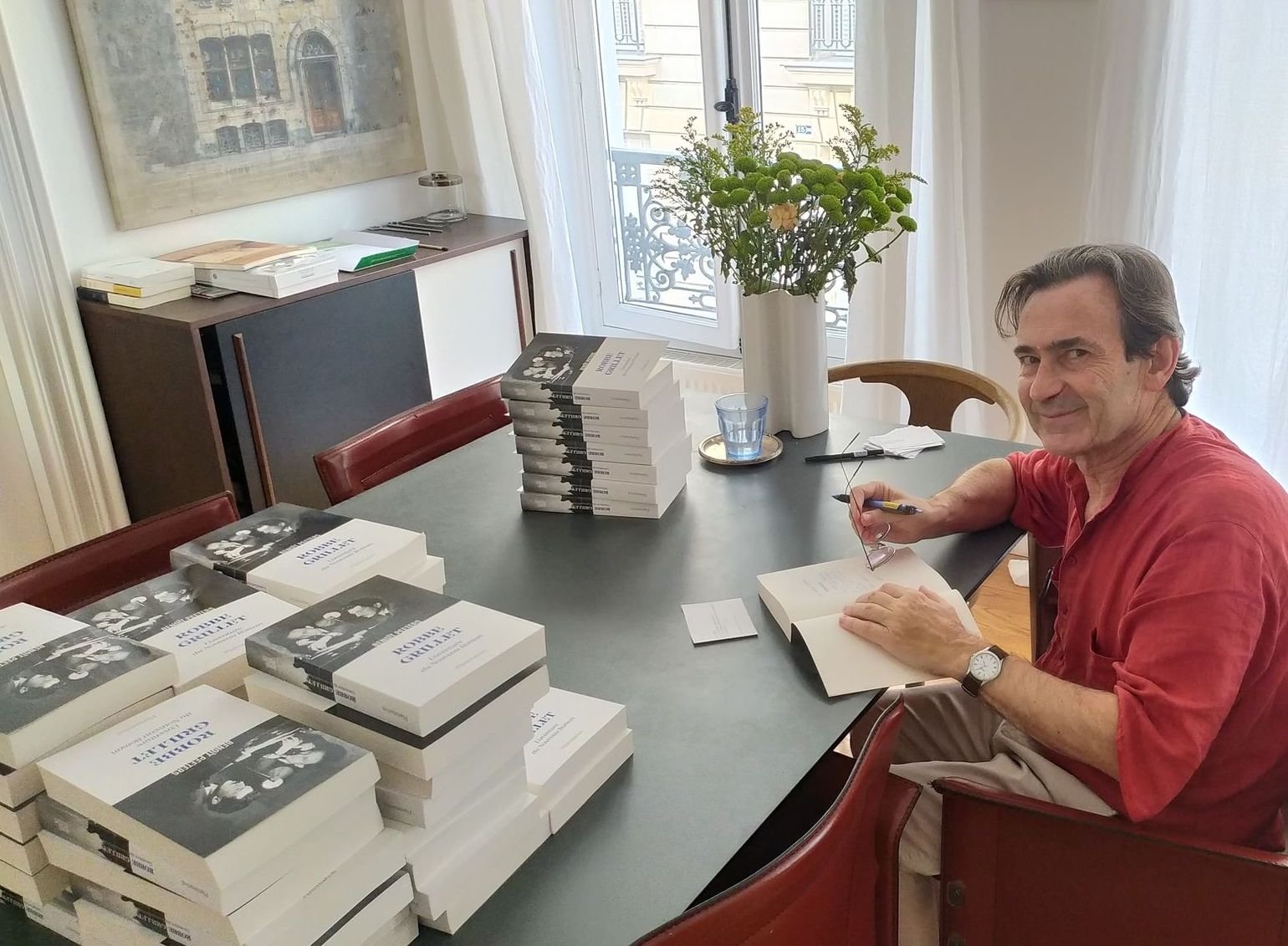 Writing a biography of Alain Robbe-Grillet (1922-2008) today is risky business. First of all, one could say that there is no real need to write such a work since few writers have so prolifically and ceaselessly commented upon their own life and work as well as their own successive and sometimes contradictory statements. Besides, the literature on the author’s biography is already huge, combining both insider’s testimonies such as the “secret” diary of his wife Catherine and countless outsider’s judgments and analyses, either first-hand or more speculative. Finally, and this may be the biggest challenge for a contemporary biographer, one might also have the impression that publishing a biography of Robbe-Grillet has become a problem in itself in 2022 since, after having been at the center of all vanguard debates on the novel between the late fifties and the early seventies when the French “New Novel” was ubiquetous (its success in U.S. universities and colleagues was almost unprecedented), the author has lost much of his relevance in our current, violently anti-formalist literary disputes, while the initial social and literary acceptation of his sexual fantasies, implicitly present in his first works yet boldly exposed in later publications has changed into harsh critique and censorship. Robbe-Grillet has always been a source of scandal, but the reasons of this being so have radically changed over time. Literature and society are no longer the same, and so is the place of the author of For a New Novel (still his most-translated work) in literary and cultural history.

Peeters’s biography takes these difficulties as its starting point and succeeds in using them as the opportunity to elaborate a new and original approach of a difficult and often impossible to locate author. Although the book contains a wealth of biographical information, not shying away from any difficult aspect of it, the purpose of the author is not to reveal unknown elements of Robbe-Grillet’s life. Shocking or surprising the reader with new spicy revelations or scandalous details is something that is totally absent from this book. What Peeters is interested in is to return to Robbe-Grillet as a writer, not only of some of the masterpieces of the New Novel movement, but also as a writer in general, struggling with words and ideas and structures whose ordering has often been painstakingly slow and difficult, and to try to understand what makes his life a truly literary life built around the internal necessity to put words on a page rather than doing something else. From that point of view, the decisive event in Robbe-Grillet’s life was to abandon his scientific career as an agronomic engineer and to take the human, financial, and social risk to exclusively devote himself to writing in the purest possible sense of the word, without any safety net or protective network. Peeters has the extreme honesty to confess that this decision, so easy to justify in retrospect given the eventual success of the author’s efforts, remains an existential knot or abyss, an impossible to answer question whose complexity can only be related to the exceptional courage of the writer who simply believed in the necessity of doing something that nobody was waiting for and that very rapidly proved to be something that almost nobody wanted him to continue once he had made a start in his career.

Hence the emphasis of Benoît Peeters on two specific dimensions of Robbe-Grillet’s life. The first one is chronological. Although the biography covers the complete life of the author, from his upbringing in an anarchistic right-wing family till his last years as a kind of gentleman-farmer among the wonderful trees of his park and the amazing cactus collection in his winter garden, this biography focuses on the golden years of Robbe-Grillet’s literary career: the emergence, triumph, and eventual fading away of the New Novel, still the most important literary innovation in the second half of the twentieth century (the biography does however pay a well-deserved tribute to certain later works by Robbe-Grillet, such as the intriguing novel Djinn, initially written as a didactic too to familiarize U.S. students with the subtleties of French grammar). Peeters describes with great panache and perfect timing the gradual yet fast appearance of a new way of writing in the 1950s, light years away from everything the novel had been standing for, even in the high-modernist era: well-told, psychologically relatable stories in a well-written style – or at least a style that could be recognized as a literary one. The first New Novel radically breaks with these implicit and explicit rules, replacing them with a way writing, that in hindsight, we may consider accurately narrative, highly relative, and perfectly literary, but that most contemporary readers and critics found totally unreadable. It is this “battle of the New Novel” that is at the heart of this biography, and Peeters illuminates from the inside, with the help of a wealth of new archival material. Peeters rightfully emphasizes the key role played by Robbe-Grillet, not only as the noisy and provoking terrorist, a role he liked to perform in the outside world, but also as the scrupulous and permanently self-doubting as well as self-criticizing writer painfully trying to invent a new language.

The second pillar of this excellent biography is the less studied and often startling interaction between Robbe-Grillet and Jérôme Lindon, the publisher of les Éditions de Minuit, the small company born during the German occupation that became one of the leading voices in French literary and political history in the afterwar period, both by its role in the resistance to France’s colonial war in Algeria and its capacity of discovering and defending new ways of writing (Beckett, the New Novel, later also Duras and many others; Robbe-Grillet himself liked to stress the fact that the radical novelty of his style was the indirect result of the refusal of his first book by Gallimard, the major literary publisher in postwar France whose mainstream policy would definitely have prevented him from further pushing the boundaries of the novel). Throughout the whole book, Peeters pays great attention to the special chemistry that existed between Lindon, today still the role model of all those dreaming of independent audacious publishing in France, and Robbe-Grillet, who was on the company’s payroll as manuscript reader (in the French literary systems, the role of the Anglo-Saxon editor is virtually absent, but there are “literary counselors” and “series directors”, who are not independent agents but a kind of editors with exclusive ties to no more than one or two publishing houses). More generally, Peeters carefully reconstructs the literary and human network of Robbe-Grillet as the literary motor and kingmaker in the Éditions de Minuit. This biography foregrounds the immense efforts of Robbe-Grillet to serve the interests of the company and its authors as well as the misunderstandings, failed opportunities, jealousies, tensions, conflicts, and rows that litter this history – and the latter ones are no less present in this biography than the former ones. In all these cases, Peeters cautiously documents why authors, such as Ollier, Simon, Sarraute or Ricardou, had in common with Robbe-Grillet and how the latter powerfully used his influence to promote their work, even in cases when he was not personally convinced by all their works. However, the biographer equally enlightens why certain relationships turned wrong, from a literary as well as a human point of view (and the relationship with Lindon is no exception to this rule).

Alain Robbe-Grillet: The Adventure of the New Novel is a timely publication. Its scholarly as well as literary merits – Peeters being a highly respected writer himself – make it a book that one can only hope to see soon in an English translation, like Peeters’s previous biographies of, among others, Hergé and Derrda.