« Review: You’ll want to visit the ‘The Obscure Cities’


The Obscure Cities Series Blends the Subtle and the Fantastic » 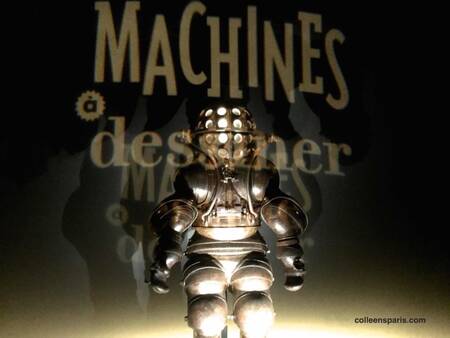 If you are interested in architecture, you may have seen more of these drawings from the novel at the Paris Revoir exhibition in 2014 Cité de l’architecture et du Patrimoine.

The Illustrator, François Schuiten and the writer, Benoît Peeters are the creators of “Obscure cities”, an award-winning series available in 15 volumes, translated into a dozen languages. The graphic novels “belong to a parallel universe”. Titles include: Paris Revoir, The Beauty and La Douce.

The Obscure Cities albums* “portray a sort of previous future in which architecture and applied sciences become strangely entangled.” In 1991, both authors took part in the contest for the Museum’s renovation.

Have you visited the Arts & Metiers metro station and walked through its “underground Nautilus”? That 1994 redesign is the work of François Schuiten.

Sample of the exhibit experience

In the exhibit, we walk through some of the museum’s inventory (from their reserves) of rare and little-known machines. All the while in the background is a violin, the sound of wind through a tunnel or a funnel and an uneven beat as steps of observers pass by.

We have stepped into a dreamlike world where pen and paper await us at the end of our visit to draw machines. Ask for your pencil at the cash desk if the exhibition is still on.

The exhibition vividly communicates a set of old and new utopian representations of Paris (drawings, paintings, models) and François Schuiten’s illustrations of another Paris.

*Obscure Cities” note: Revoir Paris, is a mid 22nd century graphic novel, illustrated by François Schuiten and written by Benoît Peeters,. “Kârinh, the young heroine, is born in the Ark, a distant space colony that has broken off all contact with Earth.” The action takes place as Kârinth crosses the retro-futuristic city from Gare du Nord to Père-Lachaise, via Les Halles of Baltard and Notre-Dame. She discovers the Musée des Arts et Métiers and the metro station of the same name. The latest album, “The Beauty” – available in English – (La Douce) and “Paris Revoir” are other albums are on sale in French at the museum store.