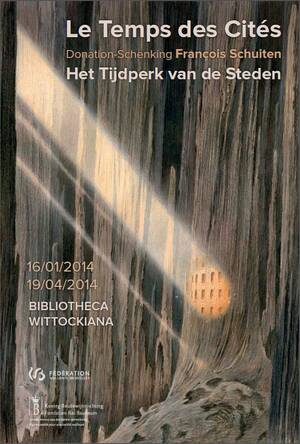 The designer and illustrator François Schuiten wanted perpetuate the original documents related to the process of creating many of his comic books. Within agreement with Benoît Peeters, Claude Renard and his brother Luc, he has donated to various institutions, including the King Baudouin Foundation, chosen as the guarantor of the continuity.

On this occasion, an exclusive exhibition at Bibliotheca Wittockiana is devoted to their fantasy world, in gratitude for their generosity. The exhibition will show original artwork from the Obscure Cities made ​​with Benoît Peeters and the older comics François Schuiten designed with his brother Luc and Claude Renard.

The exhibition at Bibliotheca Wittockiana takes the visitor on a journey of discovery of the universes created by François Schuiten: firstly with his brother Luc, in the three albums in the series Les Terres Creuses. It was Luc who introduced his brother to strip cartoons. Next, Métamorphoses, which features two stories that François Schuiten created with Claude Renard, a teacher at St Luc who taught him the basis of the art of drawing. And lastly, Les Cités Obscures, his most famous work that he created with his great friend Benoît Peeters.

Visitors to the exhibition also have the opportunity of seeing something of the process of creating a strip cartoon, starting from the original artwork, a procedure that was closely monitored by François Schuiten in an effort to guarantee a printing quality that was as close as possible to his original drawings. In making his donation to the King Baudouin Foundation, François Schuiten not only prevented dispersion of the original drawings for his albums; he also ensured that the quality of any future re-printing would be in-line with technical advances in printing.

The scenography is quite ambitious and will showcase the pages of

As an artist and creator of strip cartoons, which he publishes with Claude Renard, his brother Luc and his childhood friend Benoît Peeters, François Schuiten is one of our most renowned illustrators. He has also created posters and postage stamps and participated in the graphic design of several films and designed the sets for numerous exhibitions.

He has received many awards for his work, including the prestigious Grand Prix d’Angoulême in 2002 and, more recently, the Manga Grand Prix at the Japan Media Arts Festival for Les Cités Obscures that he created with Benoît Peeters. It was the first time that Belgian and French artists had been awarded this prestigious prize. The proof, if more is needed, that their art is internationally recognized. 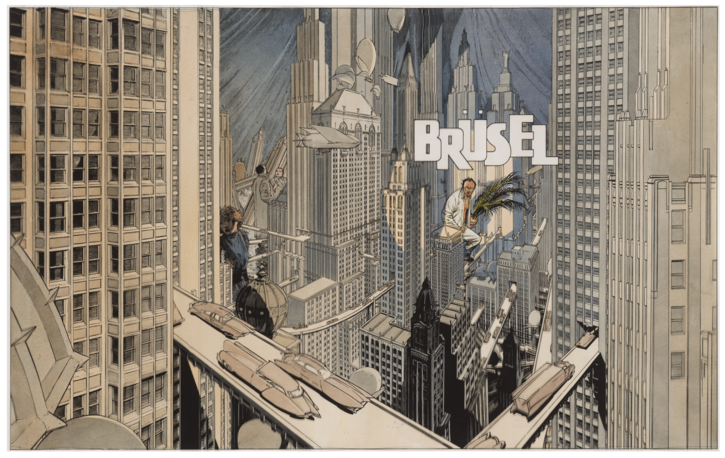 On the 30th anniversary of Cités Obscures, François Schuiten has donated to the Foundation his original drawings and the contact proofs of the books in this series for which the story is set in Belgium. At Benoït Peeters’ behest, he has entrusted the other part, where the story is set in France, to the Bibliothèque Nationale de France. In addition to the documents pertaining to Cités Obscures, François Schuiten has also entrusted to the Foundation the genesis of the volumes he created with Claude Renard and his brother Luc. These will now be kept in the François Schuiten Fund as part of the King Baudouin Foundation’s collection.

François Schuiten’s objective is to perpetuate the most authentic documents of his output, those that not only tell the story, but also the process of his creation. All of these documents come from the artist’s own hand and contain a potency that the printing process has difficulty in reproducing, despite the great attention devoted to the technical process. It is to be hoped that future technological developments will enable the printed work to get increasingly close to the originals which, thanks to this donation, will remain available for re-printing.

The originals and the documents have been distributed between the Bibliothèque Nationale de France (BNF), the King Baudouin Foundation (with the creation of the François Schuiten Fund), the Maison Autrique (in the Commune of Schaerbeek), the Musée de la Bande Dessinée in Angoulême, the Centre de l’Image in La Louvière and the Centre Belge de la Bande Dessinée (CBBD) in Brussels. Images created within the context of external orders and then integrated into books, as well as other drawings (for sets, posters, and plates) remain the property of the family 2).

Alongside the exhibition, the Bibliotheca Wittockiana is organizing a series of events including a lecture by Thierry Bellefroid, author of the book François Schuiten, L’Horloger du Rêve, and a book-signing session by François Schuiten.

The exposition will be held in: 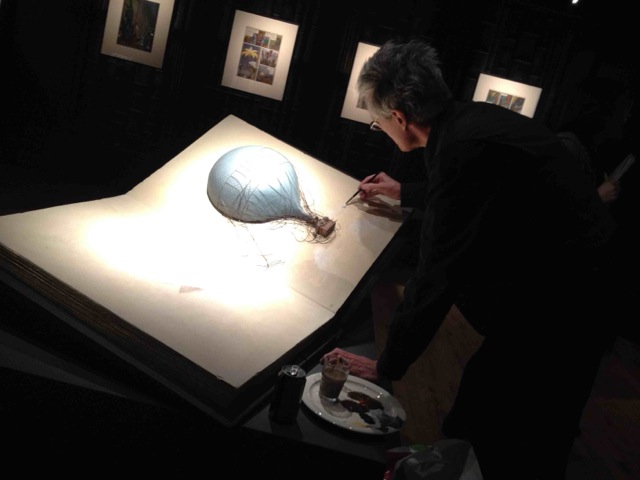 Some examples of the orignal artwork that will be on display in the exhibition. 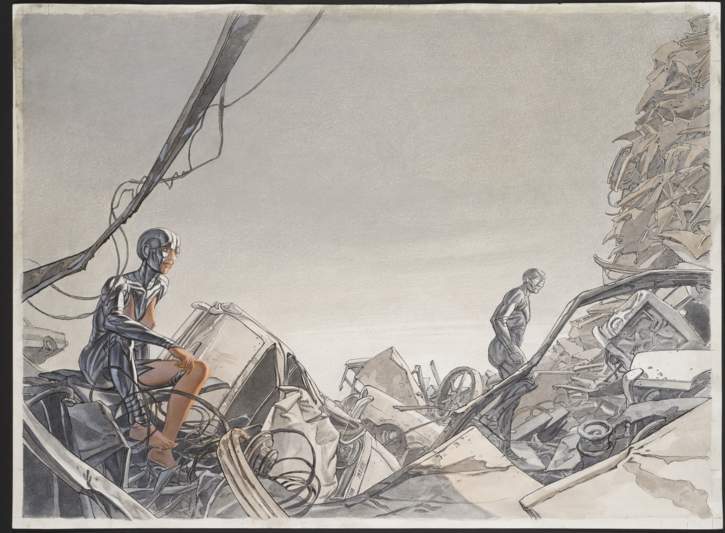 Illustration of the cover for the three albums of Les Terres Creuses (1997, with Luc Schuiten) © François Schuiten, Casterman - photo by Ph. de Formanoir 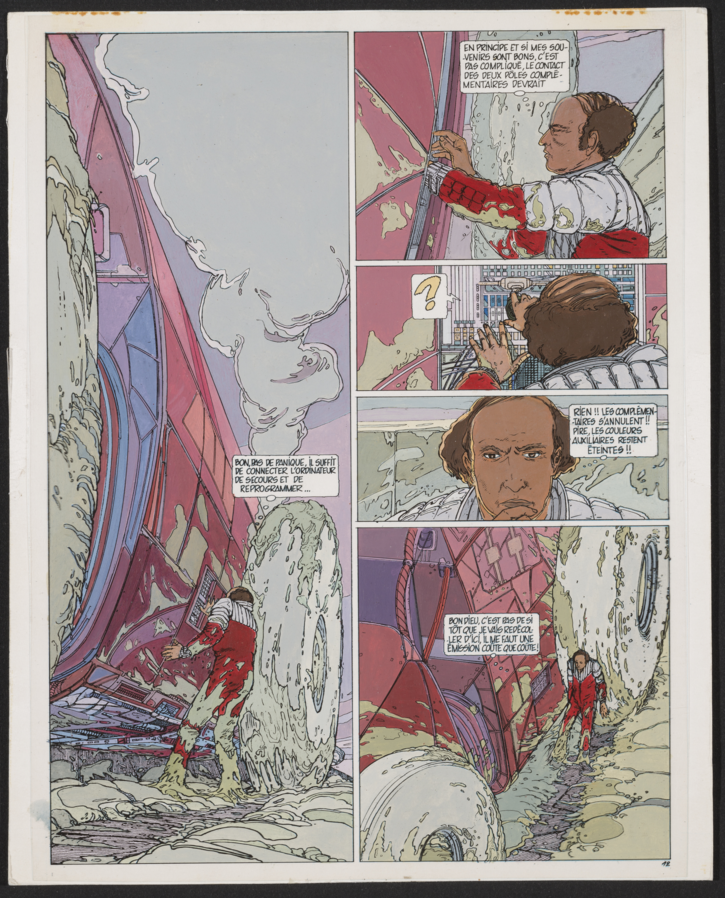 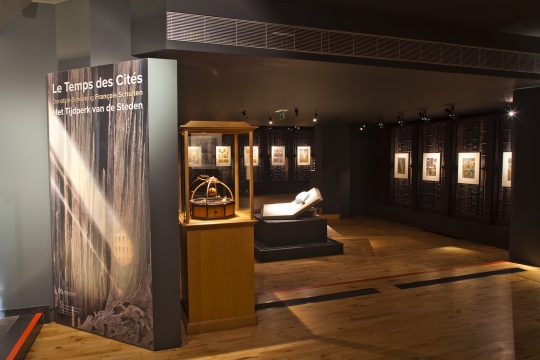 On January 16, 2014 the exhibition was opened. Some pictures of the event. Images are provided by Bibliotheca Wittockiana and Benoît Peeters.

An extensive visit to the exposition 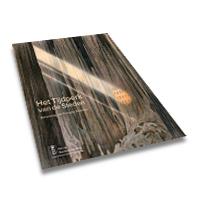 To mark the occasion of François Schuiten’s donation, the Heritage Fund has published a book in which Benoît Peeters evokes the “Cités obscures” and Thierry Bellefroid talks about François Schuiten’s work as a young man. Tristan Garcia casts a more philosophical look at his work.

The book has 77 pages and costs 8 euro. You can order the book online in Dutch or French.