An exhibition about Le Dernier Pharaon will be held in Maison Autrique. This exhibition is held from May 29th, 2019 until the 19th January 2020. 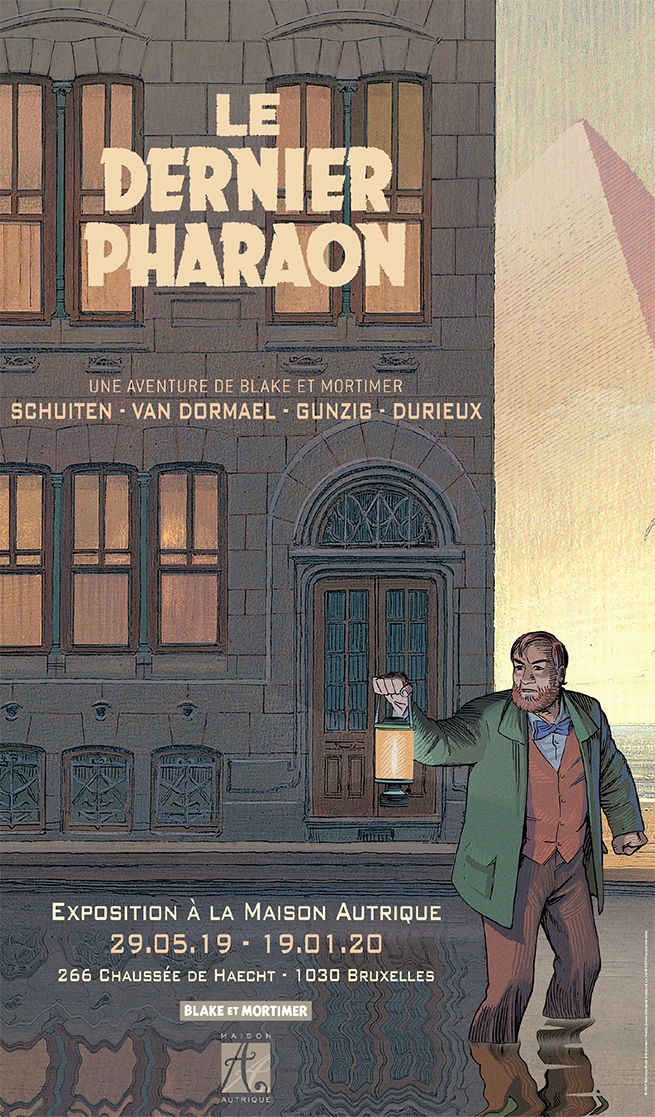 The exhibition was opened on May 28, 2019. Maison Autrique 1) and Théo Strato 2) published the following pictures of the opening .

The Brussels-born comic-book author Edgar P. Jacobs published his first ‘Blake and Mortimer’ adventure in 1946, in the Tintin magazine. This was to be followed, in 1950, by ‘The Mystery of the Great Pyramid’. The publishing houses Blake et Mortimer and Dargaud Benelux, who now own the rights to the renowned British heroes, had long envisaged producing a one-off album, separate from the traditional series and emanating from the personal vision of a writer who was themselves an admirer of Jacobs. Their choice fell naturally on another native of Brussels: François Schuiten. 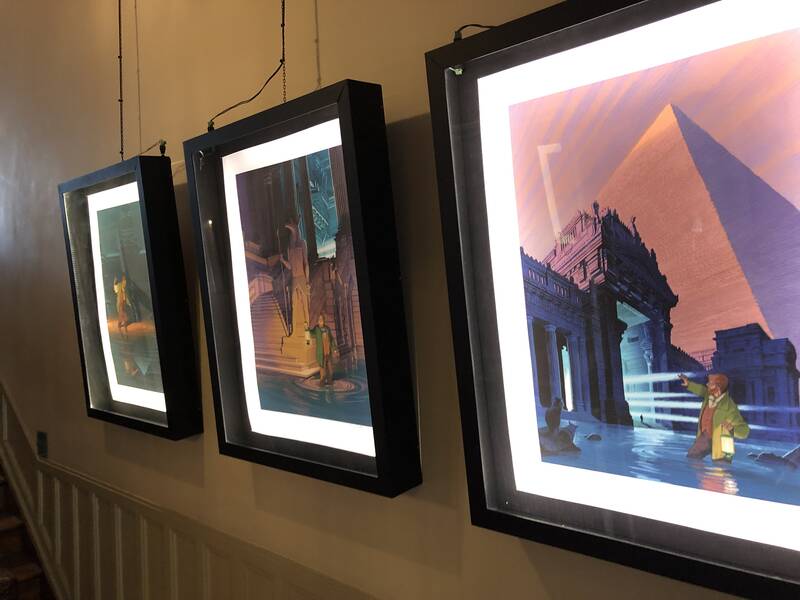 It was Schuiten, along with Benoît Peeters, who spearheaded the revival of the Autrique House and it seemed to us only right that the original artwork for The Last Pharaoh should find a welcome there. François Schuiten did not tackle the task alone. He enlisted film-maker Jaco Van Dormael and novelist Thomas Gunzig to flesh out the storyboard for this unique Blake and Mortimer adventure and give it its final polish. Laurent Durieux made a gorgeous work as colorist.

The Last Pharaoh is neither a homage nor a nostalgic return to the past. Played out between the Giza Plateau and the hills of Brussels, it offers a new slant on the myth created by Edgar P. Jacobs.

The Brussels Courthouse Protagonist and backdrop

‘As you know, the Courthouse building fascinates me. But there is also a link with Jacobs: notes have been found indicating that he was planning a story that would take place in this location.’ This comes as no surprise when you are aware that Jacobs spent his childhood in the Rue Ernest Allard, under the shadow of the Law Courts. ‘When you read this story, you will know why the building still has scaffolding round it!’ 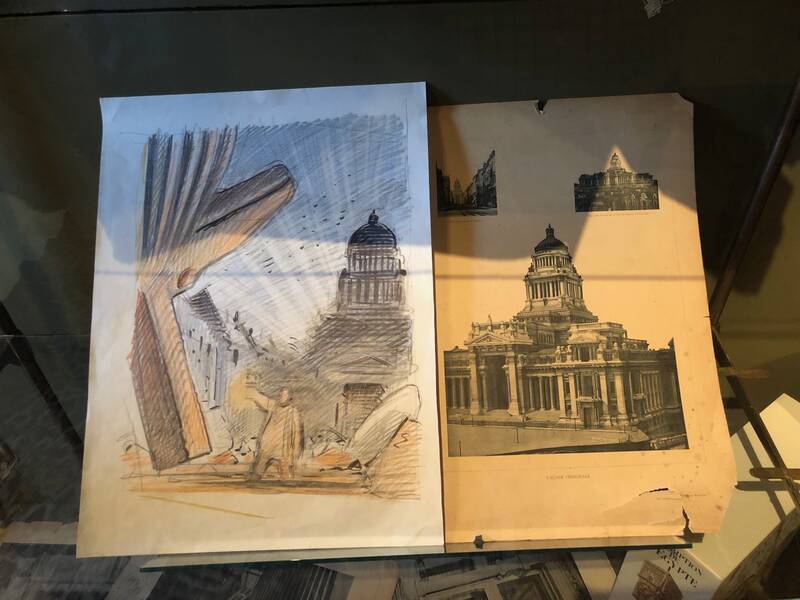 The building’s architect, Joseph Poelaert, wanted to top it with a pyramid rather than the dome now in place – a thwarted aspiration made good in The Last Pharaoh. Remember, too, that the ‘Obscure Cities’ series created by Schuiten and Peeters gives star billing to the ‘pharaonic edifice’.

In the second half of the 19th century, the Belgian authorities embarked on a huge programme of urban redevelopment in Brussels. It was decided that the creation of a promenade running towards the Bois de la Cambre – in other words, the opening-up of what would become the Avenue Louise – should be combined with the construction of a new courthouse. Located 650 metres from the Place Royale, at the end of the Rue de la Régence, the court-building occupied the perfect site: it was erected on the Galgenberg – the old ‘Gallows Hill’ overlooking the city – where justice was already being dispensed in the Middle Ages.

An architectural design competition was launched. Poelaert was on the judges’ panel and managed to persuade the other members that none of the designs tendered would be magnificent enough to constitute the kind of ‘monument’ that Justice deserved – none of them, that is, except his own, even though it was not included in the tenders. The project was approved. The next stage saw compulsory purchases on a massive scale, interminable discussions about the budget, and endless adjustments to the implementation plans. In 1866, the first stone in the ‘monument’ was laid, marking the start of building works that would continue for seventeen years. In 1883, when Poelaert was no longer of this world, King Leopold II officially opened the colossal structure, to jeers from the city centre’s working population. The arguments had begun – and are still far from resolved, even today.

The Palais de Justice can be viewed as the crowning achievement of the eclectic art of the 19th century. At the time it was built, it was one of the largest buildings in the world – so vast that it could contain the whole of St Peter’s in Rome.

The Last Pharaoh is set in Brussels, but a mysterious kind of communication goes on between the city and the Egyptian pyramids. The pyramids! Another of François Schuiten’s passions and one that he was able to indulge during a scientific expedition documented in late 2016 in an exhibition at the Museum of Fine Arts in Lille. 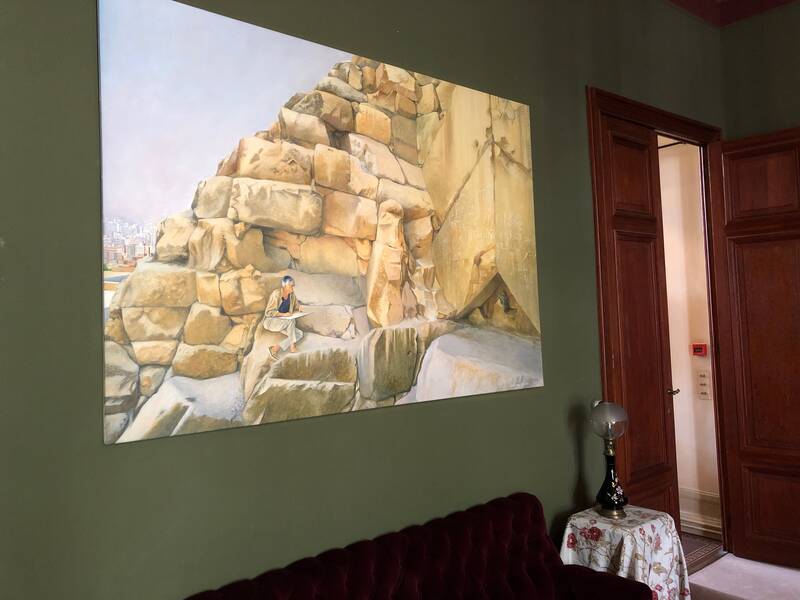 Because so much has been said and written on this subject, as soon as you broach it, you risk descending into cliché. Comic-book artists have seized on the pyramids as a backdrop against which to develop their heroes’ characters – witness Hergé’s Cigars of the Pharaoh and Edgar P Jacobs’ Mystery of the Great Pyramid. The early explorers and Egyptologists were accompanied by great artists and illustrators. From now on, one of the names featuring on the roll-call that leads directly back to these artistic adventurers will be that of François Schuiten.

Schuiten – scenographer, artist, and comic-book illustrator – has clearly spent many hours studying the pyramids, observing their shape, volume, structure, and surroundings in an attempt to understand them better and be better able to reconstruct them. His meticulous pencil drawings and gentle watercolours betray the same patient concern to make sense

of the stones, analyse the way they are put together, and capture their changing colours from dawn to dusk. As a matter of fact, his skills of observation proved such that he turned up a hitherto unnoticed anomaly in construction.

When you hear François Schuiten speak, it is clear how spellbound he remains by his encounter with the pyramids, echoing the experience of the artists who first accompanied Egyptologists into the field. Victor Horta, the architect of the Autrique House, also undertook an ‘Egyptian tour’ – a very modest one, organized by the Thomas Cook travel agency. We know this from the documents on display here, discovered by Professor Dirk Van de Vijver in the course of his research. 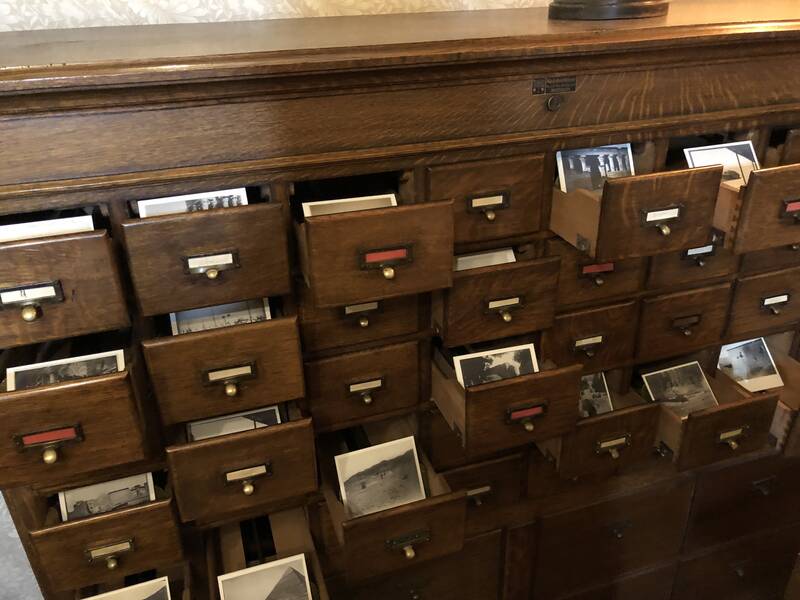 Victor Horta and Eugène Autrique were members of Les Amis Philanthropes, a masonic lodge under the obedience of the Grand Orient of Belgium. Egyptian and Pharaonic style figure prominently in the decoration of masonic temples in Brussels, now classed as listed buildings and in some cases accessible to non-masonic visitors. The façade of the Autrique House is itself decorated with Egyptian motifs.

The notes made by Victor Horta about his trip flag up the crucial importance of having a camera to hand. Thanks to the existence of several hundred photographs preserved in the Horta Museum (on deposit from the Jean and Renée Delhaye Foundation), we have a record of his journey and are able to reconstruct it pictorially. Some of the photographs are displayed here. 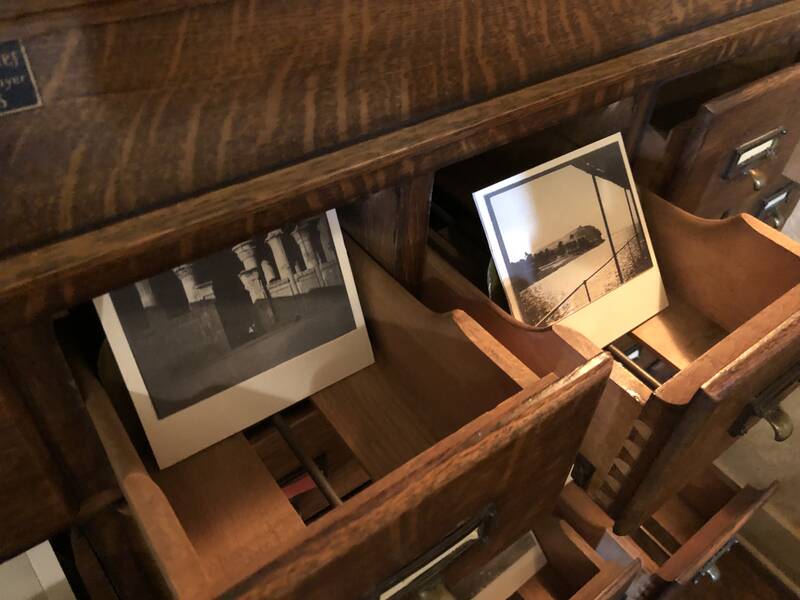 A one-week trip on the Nile introduced the architect-cum-photographer to the key sites of Egyptian antiquity, the island of Philae being the southernmost destination. Other way-stations included: the emblematic pyramids of Giza and the Colossi of Memnon, the underground tombs of Beni Hassan and the mortuary complex of Queen Hatshepsut at Deir El Bahri, the Ramesseum, the Medinet Habu complex, the Kom Ombo temple at Rom Ombos, the Temple of Khnum at Esna, the temple of Horus at Edfu and the temple complexes at Abydos, Dendera, Karnak, Thebes and Luxor.

Another product of the trip was a collection of rather unsettling romanticized images of 20th-century Western tourists posing amidst the ruins of a millennial civilization. The fact that the Autrique House, designed by Victor Horta, should be the setting for a display of the colour plates and drawings created by François Schuiten for The Last Pharaoh is clearly no coincidence.

Several events are organised around the exhibition.