You are here » The Obscure Cities » Dossiers » Perdriel Archives (the) 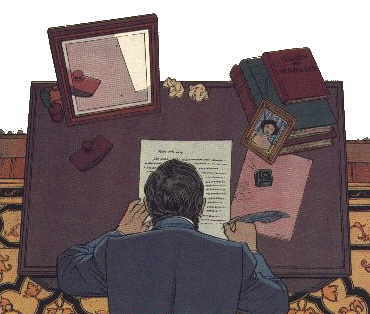 It must have been around 1991 when I got in touch with the Le Dossier B. From that moment my fascination grew for the parallel world, known by the inner circle as the world of the Obscure Cities. I took over the inheritance of my father after his death. My father had been a publisher during his life and after his death he left a huge collection of books behind. Between these book I found the 1960's published Le dossier B.

Although I hadn't shown much interest in my father's books during his life but this book that isn't publicly available for centuries fascinated me. The writer disappeared and the publisher, my father, got bankrupt.

This book, I suspect only a few copies are still available in private collections, was for me the start of a search that ends for now at a place nobody would think of: The Obscure Cities.

Le Dossier B is a novel written by the Belgium writer: Pierre Lidiaux. The book contains a story about a passage to a world that is called the world of the Obscure Cities. There would be a passage in Brussels.

Curious why my father had kept this book in his personal archive I started a search for more information about these Obscure Cities. On the Internet I found a site by a guy called Joseph Le Perdriel, a man who wrote a letter about his experiences. Via the albums of Schuiten and Peeters he had started to believe in the existence of the Obscure Cities.

The two Belgium authors have been of great importance for the research of the Obscure Cities. In many albums they wrote about the Obscure Cities and mapped them out. They also made a web site where they published their experiences. In the files of Perdriel I found a log file of a chat meeting with Schuiten and Peeters at April 25, 1999.

At a certain moment I found Joseph in Groningen, the Netherlands and spoke with him. He was a nervous guy. I noticed that his research for a passage had an enormous impact on him. I could speak with him only twice. Before I could tell him about the Dossier B I got the news that Joseph was admitted to a hospital because they doubted about his mentality.

A letter to Benoît Peeters

Via my connections within the Authorities I got hold on the documents of Joseph. Most striking I found the letter from an unknown person to Benoît Peeters. The comparisons between the Obscure Cities and our world how frightening. But again it became clear how dangerous it is to research the Obscure Cities Joseph in a hospital, the researcher of the letter to Peeters: disappeared.

In the archive of Joseph le Perdriel I found more documents. Documents showing that there must be many connections between the parallel world of the Obscure Cities and the world, as we know it:

A museum with art by Desombres, a man that was also mentioned in the research of Joseph le Perdriel.

In words but mostly by images from the albums of Schuiten and Peeters it is proven that the Obscure Cities and the common reality are connected very tight.

During my own research I found a newspaper called The Light with a story about the 5 chimneys of the power plant in Groningen. These chimneys were brought down because of lack of resources for maintenance. But that's what I have heard about it, The Light throw a different light on it.

I promise you that I will continue my search. You would like to know why I write this letter? I fear I will get the same problems like Joseph, the writer of the letter to Peeters and all the other who have searched for a passage to the Obscure Cities. Have they found it? Or are they disappeared due to the Authorities. I don't know.

My research is, although I have got already some result, isn't ended yet. I want to ask you to help me in my search, the more people working on this noble case the better it is. Subscribe to the mailing list or gather for a chat.

In name of all the researchers and other victims of the research after the Obscure Cities, Help me!