This letter by Joseph le Perdriel is written in 1996 and published on the Internet. It contains the story about how Joseph got entangled into the “Obscure Cities”. His research in documented by the fragments of his diary he published together with letter. I have included these diary parts in this document.

I have to admit that I doubt about Joseph from time to time. At certain moments he isn't very objective anymore, too emotional. But wouldn't you get emotional for something less?

The case of the Obscure Cities has come to a point where I can no longer keep silent. Our world is connected to a parallel world. I know that there is a risk that I will be prosecuted by the Authorities, but the exposure is far more important.

The reason for all of this are several publications of the Belgian authors François Schuiten and Benoît Peeters, who seem to keep close contact with the World of the Obscure Cities.

The two inhabitants of Brussels started a series of publications in 1983 with the publication of a strange tale about a city, called Samaris, which is under investigation due to orders of the rulers of the nearby situated city Xhystos. The brave Franz is asked to start this investigation. This explorer makes some shocking discoveries, that are thought to be fairytales in our world. Most people didn't pay attention to it. I myself thought the imaginary world of Schuiten and Peeters to be fake as well.

Everything changes in 1985, when the aformentioned authors publish a hallucinatory story about the city Urbicande, which was hit by a growing metal frame in the shape of a cube. The entire city became overgrown by the metal pipes that grew larger and larger. Although this event proved not to be fatal to the city, it shows that our Authorities worry about a possible repetition in our world.

While the great mass is told that the publications by Schuiten and Peeters are just invented, it proves from secret reports that the two authors were questioned by the secret services several times. After all this, things remained quiet for two years, until The Tower was published in 1987. After reading this novel I did not know much more. This must have been the reason why it was not prohibited by the Authorities. I think they thought is was all fiction, as in the case of Samaris.

The slightly disturbing feeling that stayed after reading the Tower disappeared like snow when the sun shines after I got hold of a copy of the Archivist, a file by Isidore Louis, published through Schuiten and Peeters in 1987. I knew of the existence of this file, which was prohibited the day after it was published. Just imagine my joy when I started reading this file. But this joy changed to surprise, and later on to a feeling of unease. In this file, Isodore Loius, the keeper of the archives of the Central Institute of Archives, shows a couple of mysteries in the Obscure Cities by using pictures. It is striking that at the end of the file the case is taken from Isidore Louis. The higher authorities on the other side also try to counteract.

The pictures and descriptions are so realistic that I, after reading it, get the feeling that the Obscure Cities are not in an imaginary, but in a parallel world.

The entire matter kept on haunting me night and day, and I just kept on studying the works of Schuiten and Peeters. I got hold of a copy of The road to Armilia in a strange way in 1989. This gives a description of the entire North-West side of the Continent of the Obscure Cities.

The book is a report of a trip by zeppelin from Mylos trough Porrentruy, Muhka, Brüsel, Bayreuth, Calvani, Genova en København to Armilia, the Pole city. The book contains an enormous amount of information and thanks to a map in the book I was able to place several Obscure Cities geographically.

Although I already had quite a lot of information about the Obscure Cities one thing did bother me: the case of Brüsel. Isidore Louis had already written a few pages about this, the largest city of the continent, and it was also mentioned in the Road to Armilia, but I still didn't know everything about this city, which was probably the most important one. I knew nothing about what this city was and what it was becoming. Unfortunately I had to wait a long time for some new facts.

Not until 1992 did I get a new essay by the authors Schuiten and Peeters with the short title Brüsel. The history of Brüsel is intriguing. I had already noticed from the works of Isidore Louis that people are continuously building in Brüsel, but to my despair I read that the entire city was demolished. And out of the ashes came a new city. At once I knew all the ins and outs considering Brüsel.

I decided because of clear similarities in Brüsel and Brussels to travel to the Belgian capital city hoping to find some more information. At a flea-market near the Palace of Justice I discovered a collection of magazines coming from the world of the Obscure Cities, called The Echo of Cities. In an attempt to get more information I put out an advertisement in the beginning of 1993. 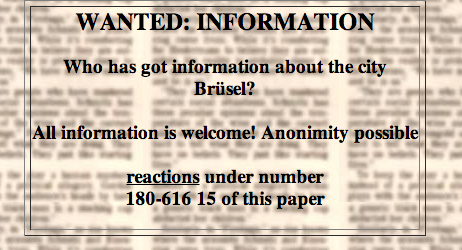 I kept on searching for two years, but I could not do anything else but study the works that I already owned, until in October 1995 I received a parcel that was sent to me by the paper in which I put my advertisement, the first reaction!

The parcel contained a videotape and an anonymous letter. 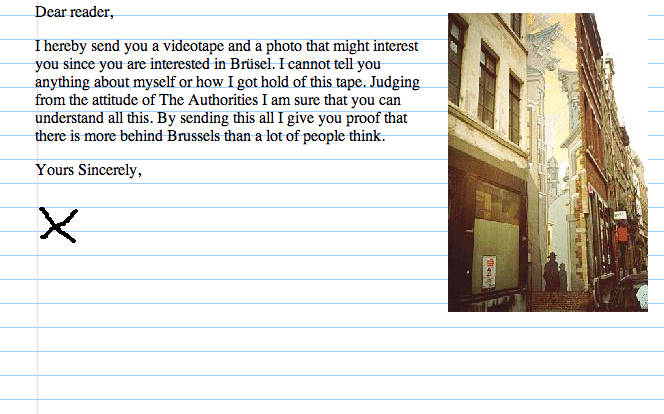 On the tape I could watch a report, called Le Dossier B, of an inquiry into a possible passage to the world of the Obscure Cities and especially the passage to Brüsel. The investigators presume that Brüsel is a parallel city of Brussels. Although it does not show from the investigation where the passage is, I was still astonished.

The reason that the Authorities try to be annoying is clear: some highly placed people are involved!

The latest publication by Schuiten and Peeters: The Leaning Child, shows that someone from our world had been to the world of the Obscure Cities at the beginning of this century. The two questions that still bother me are:

Do passages to the world of the Obscure Cities still exist nowadays? If so, then where are they? Judging from all those publications, the existence of the Obscure Cities is a fact to me. Knowing that I disobey all the rules of the authorities, I will publish all that I know about this matter. To everyone who has the guts to stand up against the Authorities: React!