You are here » The Obscure Cities » Dossiers » The Urbicande Network, a Phase Transition in the Etherical Continuum?

The Urbicande Network, a Phase Transition in the Etherical Continuum? 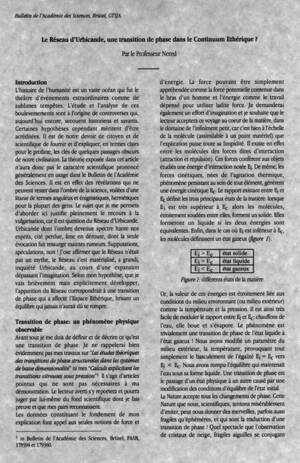 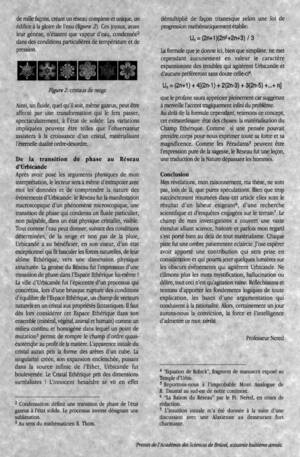 The history of Humanity is a vast ocean that has been a theatre for extraordinary events as well as glorious storms. The study and analysis of those upheavals have generated controversies that, to this day, are shaking historians and scientists. Some hypotheses nevertheless deserve to be acknowledged. It is our duty, as citizen and people of science, to provide and explain, in terms easily understood by lay people, the keys to some obscure periods of our civilisation. The theory exposed in this article will therefore not have the deep scientific format usually seen in the Bulletin of the Academy of Sciences. There are indeed revelations that cannot stay hidden in the shadowy realms of science, veiled behind a litany of harsh and enigmatic terms, inaccessible to most. The subject that I dare breach here fully justifies the use of vulgarisation, for it touches the Urbicande Network or, as it is sometimes called, The Web (an incorrect translation of the original term Réseau). Urbicande, whose shadow became the spectre that haunts our minds, lost city, lost soul; whose evocation, alone, brings back so many rumours. Wild computations, speculations, no! I dare to declare that the Network was not a myth, the Network materialised, it grew, it worried Urbicande, all in the course of an expansion that defies the imagination. According to my hypothesis, which I shall briefly but thoroughly develop, the appearance of the Network corresponds to a phase transition that has affected Etherical Space, breaking an equilibrium that should have never ruptured.

Before anything else, I must define and describe what is a phase transition. I will of course not recall my work on “The Theoretical Study of Structural Phase Transition in Low Dimension Systems” nor my “Calculations Explaining Vitreous Transitions Under Pressure” 1). These are arcane articles, which are not necessary for my demonstration. The knowledgeable reader will be able to refer to those and judge by himself of the scientific baggage I possess and that is recognised by my peers.

The data on which my explanation is based calls upon the sole notions of Force and Energy. The concept of Force can be likened to the potential contained in a man's arm and Energy to the work necessary to use the Force. I will also ask the reader to provide a bit of imagination and hope that you will agree to this journey to the very heart of matter, in the domain of the infinitely small, for it is only at the scale of the molecule - a single point, really - that the explanation becomes crystal clear. Indeed, there are between molecules forces called interactive (attraction and repulsion). Those forces charge the studied objects with an interactional energy, noted Ei. Likewise, kinetic forces born from thermal turmoil - a persisting phenomenon in any element - generate a kinetic energy, Ec. The relationship between Ei and Ec defines the three main states of matter: when Ei is very superior to Ec, then the molecules, huddled close together, form a solid. They will form a liquid if both energies are equivalent. Finally, in cases where Ei is inferior to Ec, the molecules define a gaseous state (Fig.1).

Fig.1: the different states of matter.

Now, the level of those energies is closely linked to the conditions of the surrounding, or exterior, medium, such as temperature and pressure. Thus, it is very easy to modulate the relationship between Ei and Ec: heat water, and it will boil and evaporate. Trivially, the phenomenon is a phase transition, from the liquid to the gaseous state! We have modified one of the parameters of the external medium – temperature – simply causing a slide of the equality Ei = Ec towards Ei < Ec. We have broken the equilibrium that was maintaining water in its liquid form. A phase transition is the passage from one physical state to another caused by a modification of the initial state's equilibrium.

Nature accepts all phase changes. This Nature that we scientists are poorly trying to emulate, can reveal to us marvels, sometimes both fragile and fleeting, and that are the translation of a phase transition! Take for instance the marvellous spectacle that is the observation of snow crystals, fragile slivers combining in a thousand ways, creating a complex and unique network, a monument to the glory of water (Fig.2). These jewels, before their genesis, were nothing more than water vapour, condensed 2) in specific conditions of temperature and pressure.

Thus, a fluid, whichever kind, even gaseous, can be influenced by a transformation that will bring it, in a spectacular manner, to a solid state. The variations involved can be such that the observer will witness the growth of a crystal, materialising the eternal order-disorder duality.

From Phase Transition to the Urbicande Network

After having laid down the physical arguments for my interpretation, the reader will be able to extrapolate the data with me and to understand the nature of the Urbicande events: the Network was the macroscopic manifestation of a microscopic phenomenon, a phase transition involving the condensation of a peculiar non-palpable fluid into a visible crystalline physical state. Just as water can become, under the appropriate conditions, snow rather than rain, Urbicande was able to benefit, in its very heart, from an exceptional state of affair that tumbled the natural forces, from their Etherical abyss into a structured physical dimension. The genesis of the Network was the expression of a phase transition of Etherical Space itself!

The city of Urbicande was the epicentre of a process that concretised, during an abrupt rupture of the equilibrium conditions of Etherical Space, a field of natural vectors into a crystal with fantastical properties. We must therefore consider this Etherical Space as a whole (vegetal, mineral and human) to be a continuous and homogeneous medium in which a mutation point 3) allowed the rupture of a quasi-esoteric field towards the side of matter. The initial appearance of the crystal would have taken the shape of the outline of a cube. The singularity thus created and its expansion started, nourished from the infinite source of the Ether, Urbicande was thrown in a shamble. The Etherical Crystal took on surrealistic dimensions! The innocent original structure was indeed multiplied on a titanic scale, following a mathematically established progression:

The formula that I present here, although simplistic, does not however bring to light the expansionistic character of the troubles that stirred Urbicande and some will probably prefer this one 4):

which the layman will fully appreciate, for it marvellously suggests the tragically infinite accent of the problem.

Beyond the formula, still, let us retain this concept, this extraordinary state of affairs: the materialisation of the Etherical Field. As if a thought could take form to express all its strength and magnificence. Just as the péradams 5) can be the pure expression of wisdom, the Network was a lesson, a translation of Nature rising above Man.

My revelations, my reasoning, my thesis, are not, far from it, pure speculation. They are, although too succinctly condensed in this article, the result of an arduous labour 6), of scientific research and on-site inquiry 7). The field of my investigation has covered a vast extent, combining science, history and my vision has sometimes gone beyond materialism. Each lead was a patiently dispelled shadow. I dare hope to have brought a contribution that will be well considered and will throw some light on the obscure events that brought so much turmoil to Urbicande. Let us forget about such words as mystification, hallucination or delirium, all of this is useless agitation. Let us instead ponder and try to set the logical foundations of all explanations, the basis of an argumentation that leads to rationality. Then, certainly one day, will we have the conviction, the strength and the intelligence to accept this word: truth.

1)
In Bulletin of the Academy of Sciences, Brüsel, PASB, 178594 and 179360.
2)
Condensation: defines a phase transition from the gaseous to the solid state. The reverse process designates sublimation.
3)
As per Mathematician R. Thom.
4)
“Equation by Robick”, fragment of a manuscript on display in the Temple of Urbis.
5)
We are here referring to the improbable Mount Analogue of R. Daumal at the south-east of our continent.
6)
“The Reason of the Network” by Pr. Nered, work in progress.
7)
I had the initial intuition following a discussion with a very charming Alaxian lady.