You are here » The Obscure Cities » Dictionary » Verhaeren, Emile 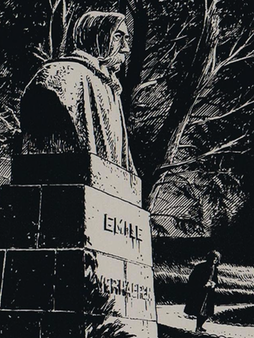 A statue of Emile can be found in a parc of Brüsel, close to the house of Elsa Autrique 1).

Emile Verharen (21 May 1855 – 27 November 1916) was a Belgian poet who wrote in the French language, and one of the chief founders of the school of Symbolism. He was born in a Flemish, French-speaking, middle-class family in Sint-Amands. Nevertheless Emile Verhaeren also spoke the local dialect (Dutch was not taught at school at that time). At the age of eleven, he was sent to a strict boarding school in Ghent run by Jesuits - The Jesuit College of Sainte Barbe, where he became completely Frenchified. He then went to study law at the University of Leuven. Here he produced his first literary efforts in a student paper. During those years, he became acquainted with like-minded students. They later became his collaborators on the revolutionary artistic magazine “La Jeune Belgique”.

Having gained his law degree, he became a trainee (1881–1884) with Edmond Picard, a renowned criminal lawyer, who also played a pivotal role on the Brussels artistic scene. Emile Verhaeren came in frequent contact with young, radical writers and artists at a time of artistic renewal. He tried only two cases before a court before deciding to dedicate his life to poetry and literature.

He soon became the mouthpiece for the artistic revival at the turn of the century. Fascinated by the works of the painters of the artistic circle “Les XX”, he wrote many articles in La Jeune Belgique and L'Art Moderne, with flamboyant criticism on the artistic-literary works of the Brussels art world. His articles brought many promising young talents, such as James Ensor, to the attention of the public.

Through these articles, he became a lifelong friend of the Neo-impressionist Belgian painter Théo van Rysselberghe, resulting in a vast body of letters. In one of these letters, he was described by Maria van Rysselberghe, as “a unique personality, a whirlwind with an indomitable character, who didn't bother himself about bourgeois rules and who provoked or overwhelmed everybody by his straightforward directness”.

He was one of the most prolific poets of his era. His first collection of poems “Les Flamandes” was published in 1883. Inspired by the paintings of Jacob Jordaens, David Teniers and Jan Steen, Verhaeren described in a direct and often provocative, naturalistic way his country and the Flemish people. It was an immediate success in avant-garde milieus, but caused a great deal of controversy in Catholic circles. His next book “Les Moines” (1886) was not the success he had hoped for. This, and his health problems, led to a deep crisis. In this period he published Les Soirs (1888), Les Débâcles (1888) and Les Flambeaux noirs (1891).

On 24 August 1891 he married Marthe Massin, a talented artist from Liège. His new-found happiness found expression in three poetry books : Les Heures Claires (1896), Les Heures d’Après-midi (1905) and Les Heures du Soir (1911). He wrote his first play “Les Aubes” in 1898. Here he waged a fight against social injustice and the decline of life in the countryside.

In 1898 he moved to Saint-Cloud, near Paris. By the turn of the century, he had become world-famous. His works were translated into more than twenty languages. His German translator was Stefan Zweig. He travelled, giving lectures, throughout Europe. The outbreak of World War I had a devastating effect on the poet's deep pacifist feelings.

When Emile Verhaeren died on 27 November 1916 at Rouen station (by falling under a train), it was Théo van Rysselberghe and his friend, the famous French writer (and later Nobel Prize winner) André Gide who had to inform Marthe Verhaeren of the death of her husband.

His vast body of work shows him as one of the most prominent figures in Belgian literature. He narrowly missed the Nobel Prize for Literature in 1911 (awarded to his friend Maurice Maeterlinck). St. Amands, his native city, has dedicated a museum to this giant of Belgian literature, showing many original manuscripts of his works and letters and also works of his artistic friends Théo van Rysselberghe, Leon Spilliaert, Constantin Meunier, Paul Signac and Ossip Zadkine. 2)