You are here » The Obscure Cities » Dictionary » Vaughn-James, Martin

Martin Vaughn-James is an artist born in 1943 AD in Bristol, England. After stays in London, Montreal, Toronto and Paris, he finally lived in Brussels. In the '70s, he collaborated with several writers and published numerous drawings in french and belgian magazines such as Minuit, Obliques, La Nouvelle Critique, Libération, Jungle, 25, etc.

In Canada he published four illustrated novels: Elephant (1970), then The Projector (1971), The Park (1972) and The Cage (1975). In the middle of the '80s, Martin Vaughn-James devoted himself mainly to painting, displaying in France, Belgium and Germany canvases where his narrative concerns are expressed in another way. His striking ressemblance with Augustin Desombres and the nature of several of his paintings do support the theory that he may have had more than a fleeting contact with the Obscure universe.

Martin Vaughn-James died on July 3, 2009. He was the author of an extraordinary graphic novel, La Cage, and had recently exhibited his paintings at the House Autrique. Martin Vaughn-James had also served as a model for the character of the painter Augustin Desombres present in several albums of “Cités obscures”. 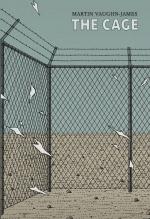 In Fall 2013, Coach House republishes what is considered to be one of the seminal graphic novels, Martin Vaughn-James's The Cage 1). Cryptic and disturbing, The Cage spurns narrative for atmosphere, guiding us through a series of disarrayed rooms and desolate landscapes. It’s not about where we’re going but how — if — we get there. The September 2 issue of Publishers Weekly includes a starred review for this graphic novel cult classic 2):

“First published in 1975, this work foreshadowed the rise of the graphic novel. While promoted by insiders in the years that followed, it is not well-known. Its relative obscurity may be due to the late Vaughn-James’s devotion to his highly personal vision. Presented here are a series of black-and-white drawings, nearly clinical in their precision, detailing an enigmatic structure in an unspecified place and time. Accompanying the illustrations are bits of text, which are perhaps explicative in their unseen whole but as fragments offer only tantalizing hints of possible unity. Nonlinear in its approach to both space and time, the study mixes the banally familiar with the disturbingly alien. What emerges is not comprehensible in any mundane sense, but it presents enough of an illusion of a greater whole lurking just out of frame to be addictively engaging. It is a masterpiece, demonstrating a level of skill and insight very few have even aspired to in the nearly 40 years since its initial publication. With an introduction by Canadian comics star and Lemony Snicket collaborator Seth, this work is strongly recommended for every true fan of the graphic arts.”

More info on his books